It's okay to rape infidels. Mohammed said so. 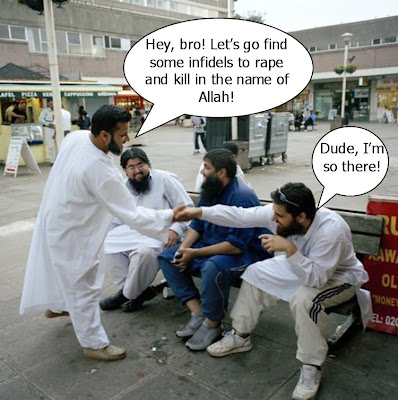 I know it looks like I’m carrying on a one-man Crusade against Islam with my blogs about what I see as the evils of Islam and Sharia Law. Maybe I am. But just the same, people like to ignore the crap that’s going on around them, too.

A report posted on Islam Watch (www.islam-watch.org), a site run by Muslims who oppose teaching intolerance and hatred for Non-Islamic “unbelievers”, exposes a prominent Islamic cleric and his lawyer who support extreme punishment for non-Muslims, including killing and rape.

A question-and-answer session with Imam Abdul Makin Khalisadar in an East London mosque asks why Allah would tell Muslims to kill and rape innocent non-Muslims, including their wives and daughters, according to Islam Watch. His interviewer asked, “…Imam Hamza Mesri said Muslims can kill British infidels and have sex with their wives and daughters. Do you agree with him?”

Khalisadar replied, “It is not what Imam Hamza said nor is there a question of my agreeing with him or not. It is in Koran, thus those are Allah’s orders.”

Well, that seems pretty cut & dry for all of us. It’s in the book, so it’s gotta be the truth.

So then the interviewer asks, “But why would Allah tell Muslims to kill and rape innocent non-Muslims?”

His reply was more side-stepping and religious crap. The Imam said "Because non-Muslims are never innocent; they are guilty of denying Allah and his Prophet. If you don't believe me, here is the legal authority, the top Muslim lawyer of Britain."

Wow…so much for the religion of peace & tolerance…

Choudary said he would not condemn a Muslim for any action. "As a Muslim, I must support my Muslim brothers and sisters," Choudary said. "I must have hatred to everything that is not Muslim."

The interviewer, a woman who was pretty much force-fed exactly what to ask to set the Imam up for proselytizing, further asks of Khalisadar, “ But our Prophet was sent as a mercy for all the humanity; he never hurt any body in his life.” , to which the reply was, “Yes, he never hurt a Muslim in his life. But Allah said non-Muslim are lowest beasts and worst creatures … and Muslim are ordered to kill them."

And when asked if the Prophet Mohammed approve of killing them and raping their wives, Khalisadar said, “Yes, he did. He not only approved of such acts, he and his Sahabas (the companions to the Prophet, much like Jesus’ disciples) practiced it regularly under Allah’s orders. He was helpless in it... If you don’t believe me, you have to believe sahih hadiths" (a hadith is the personal recollection of Mohammed or one of his companions, much like the various Gospels of the Christian Bible).

Khalisadar then went on to quote a couple of passages from the Koran that described the sacking of a Jewish village and the resulting slaughter of the men and the taking of a certain specific young woman of 17,who was the wife of the village chief. After telling the story and working the male audience members into a bit of a lather, Khalisadar hatched a plan by which seven of the men agreed to lie for Main and say he was preaching to them at the local mosque if he ended up being apprehended for rape, and likewise he would lie for any of them.

Khalisadar ended up raping a local 27-year old woman in her home at knifepoint, and after being apprehended his cronies lied for him. What the Koran didn’t plan on was that he’d be convicted with DNA evidence. The Imam got 7½ years for rape and 2½ for conspiring to pervert justice. The seven members of the East London Mosque plead guilty to perverting justice and got 12 months each. Their burka-clad wives, present in the court, couldn’t believe this supposed miscarriage of justice. They yelled abuse at the judge for punishing their husbands for practicing their religion. They asked why an act approved by Koran and practiced by the holy Prophet punishable in a country which claims freedom of religion. They also claimed that it was clearly a discrimination against Muslims and definitely important for Muslims to implement Sharia Law in England as suggested by the learned Archbishop. (Oh yeah, in case you missed that blog, the Archbishop of Canterbury thinks that Sharia in the U.K. is inevitable. Only if you roll over and allow it to happen, your Holiness…)

But Imam Abdul had no regrets. For the first time in his life he had a white woman and in addition he gained a lot of sawab for following in the footsteps of his beloved prophet. Sawab is like a version of virtue, so this guy scored brownie points with his homies for raping a white lady.

Sad to say, had this happened in a Sharia country, he would have skated away scot-free, since Sharia Law requires four male witnesses to prove a rape, and chances are that those four witnesses were participants first.

So, I shall continue my little one-man Crusade against radical Islam and Sharia Law. Wake up, Sheeple! There’s more going on outside your window than trying to keep up with the Kardashians and worrying over who’ll get kicked off Flavor of Love this week.
Posted by Steve: The Lightning Man at 4/02/2008 05:10:00 PM