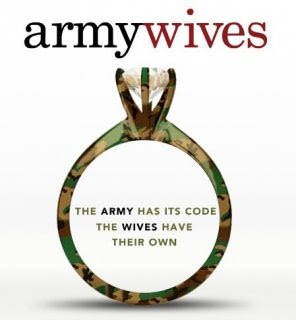 Just as a reminder, dear readers, that tonight on Lifetime is the season premiere of the second season of Army Wives. Yeah, you read that right. Steve watches a girly show.

Please don't try to say I'm emasculated or that I need to turn in my Man Card. It's a good show with good characters, and most importantly, it has good intentions. As a veteran, I'm all about highlighting the hardships and sacrifices of our troops. However, being a military spouse is a tremendously demanding and difficult thing to be. It's good to see a show that brings positive attention to the difficulties and strains faced by military families during wartime. Loneliness, depression, worry, and fear are sometimes harder on the families than on the soldiers.

The show isn't perfect, though, and for me that's half the fun. I watch in part to look for mistakes like uniform errors, sketchy dialogue, hokey situations, and the like. I find them, whether intended by the producers or not. I find a lot of uniform errors and the way the actors wear their berets is atrocious in most cases. You'd think that their budget would allow for a better technical advisor on dialogue and uniforms, especially with so many military people right here in the Charleston area where they film the show. Hell, I'd do it if they asked.

Before any of you try to give me the crap old line about Hollywood being forced to have a mistake in every uniform because it's illegal to wear an accurate uniform, that's pure crap. Here's the proof:

§ 772. When wearing by persons not on active duty authorized

(f) While portraying a member of the Army, Navy, Air Force, or Marine Corps, an actor in a theatrical or motion-picture production may wear the uniform of that armed force if the portrayal does not tend to discredit that armed force.

Thusly, so long as the portrayal does not intentionally discredit the service being portrayed, you can make the uniform accurate. Save the hate mail saying I'm wrong.

I also watch the show to see the locations, since it's filmed all around the Charleston area. I'm constantly seeing places I recognize, from on-base locations to the Hump Bar, which is Big Deck Daddy's, the now-closed biker bar on Rivers Avenue. There's a guy my wife went to high school with who works as an extra on many episodes, and in one episode he was the first person to be seen on-camera, so that's kinda neat too.

So, tune in and watch. You may find it hokey or melodramatic, or you may just find that it's a very engaging show well worth watching.