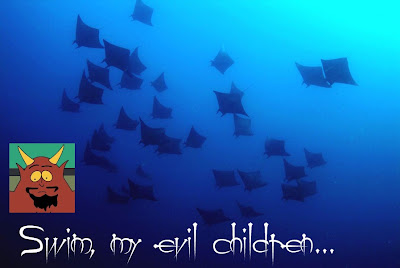 How in the bloody blue Hell did I miss this?

Granted, I don't follow baseball nearly as much as I follow hockey. Sure, I've been a Red Sox fan for about 23 years or so, but I don't religiously follow every game or every transaction. In fact, after the Sox won the World Series this last season, I completely forgot baseball since hockey was gearing up.

That said, I'm still not sure how I missed the fact that the Tampa Bay Devil Rays changed their name to simply the Tampa Bay Rays. Perhaps the perenially last-place team figured the November name change and uniform replacement would help. It must have worked, because the Rays are neck and neck in a battle for first place in the AL East with the Red Sox. Perhaps the devil himself was the reason for the team's crapfest performances?

Exorcising the Devil from the Devil Rays seemed to have done something. Don't let the radical Christian reactionaries hear that, or they'll campaign to have the majestic devil rays eradicated from the world's oceans. I'd heard several rumors this week that it was pressure from the church to change the name that finally caused the ownership to cave....

C'mon, it's a fish. It's not like they were the Tampa Bay Satan Rays. If that's the case, then we also need to protest and boycott Duke University, home of the Blue Satans (I mean, Blue Devils). Hockey's New Jersey Devils organization replicates its name in their minor league affiliates, so we have the New Jersey Satans, Lowell Satans, and Trenton Satans. The Mississippi Valley State Delta Devils and the Northwestern State University Devils must be stopped! And Texas A&M International has to change from the DustDevils, because they could all too easily be confused as the Dust Satans.

I guess the church is okay with teams like Cardinals, Preachers, Battlin' Bishops, Monks, Angels, Deacons (except for Wake Forest's Demon Deacons. They're verily the Devil Incarnate), Saints, Friars, Crusaders, and Paladins. And lest we forget the Chosen Players of the Yeshiva University Maccabees.

Now that this argument has less meat on its bones than the proverbial dead horse, can we get back to complaining about team names with references to Native Americans? There may yet be meat left on those bones to flay.

And before you say I'm just indiferent to the plight of indigenous peoples, shut up. Maybe I'm just jealous that no one wants to name a team after my particular group? Who'd root for a team called the Avereage Middle Aged Anglo-Slavic White Guys?
Posted by Steve: The Lightning Man at 6/08/2008 03:58:00 PM