There's no "honor" in an honor killing 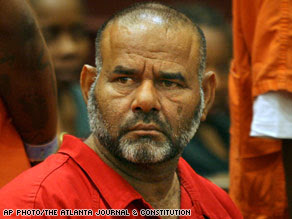 Chaudry Rashid, not exactly Father of the Year

Twenty-five-year-old Sandeela Kanwal was not happy with the marriage her father had arranged for her. So after the ceremony was performed in Pakistan three months ago, she went to Georgia and her husband went to Chicago. The young woman's husband was living in Chicago, police said, but Kanwal remained at her father's home and worked at a metro Atlanta Wal-Mart for a brief time.

Early Sunday, after a heated argument with her father, police in Clayton County near Atlanta said, the Pakistani immigrant allegedly took a bungee cord, wrapped it around his daughter's neck and killed her.

"The victim was not interested in neither marrying, nor remaining married to her husband," the police report said, citing information authorities received from Rashid's wife. "This was causing a great deal of friction between the victim and her father," so much so that the two had not spoken in two months, the report said. The two argued over the marriage and Rashid is alleged to have strangled his daughter to maintain family honor, feeling his daughter had disgraced his family.

The problem of "honor killings" and other domestic violence after failed arranged marriages is spreading as some culturally rigid Pakistani and Indian immigrants settle in different parts of the country, said Najma Adam, a sociology professor at Governors State University in suburban Chicago who co-wrote a 2007 study on the issue. When the marriage breaks down, both families are dishonored, especially the bride's, she said.

Subsequently, "family members, parents, are the ones who end up either taking their life or further abusing them," Adam said.

In arranged marriages, "even if [the husband] is beating her and very abusive toward her, because of the very strong patriarchal underpinnings, she is the one who has committed the crime by leaving him or by wanting out of this relationship," Adam said.

This kind of crap happens all the time in Muslim countries, where women are treated worse than house pets. This is also the kind of crap you can expect if you start letting Islamic laws take hold in your country. Hey, Britain, take notice. You too, Canada. Your tolerance of Muslim customs that run counter to English & Canadian common law just so you can look all sympathetic and liberal and open-arms to the “poor downtrodden masses” is allowing honor killings to take place in your countries. This is your immediate future if you don’t do something about it.

On the plus side, I somehow think that that the good old boys of the Clayton County, Georgia judiciary system are gonna be a lot les inclined to give this guy any sort of break or to embrace Sharia Law with open arms. It’s a horrible shame that an unhappy young lady was brutally murdered by her own father, and hopefully this will be a HUGE wakeup call for Americans to keep vigilant against this sort of bullshit. There’s no honor in honor killings.

Again, as I have said numerous times in the past: Religion of peace, my ass. 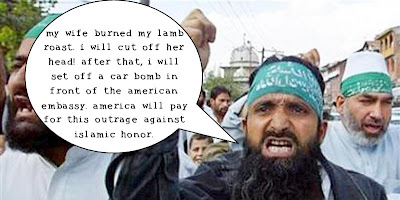