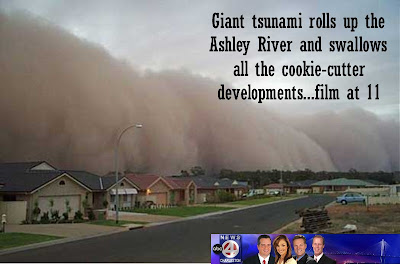 People running to and fro all in a dither, neighbors gathering in the streets, panicked calls to the police asking about nuclear blasts, rumors of a freak winter thunderstorm, and a couple cracks in some drywall (not a wonder considering how fast these houses in the new Mushroom Neighborhood™ subdivisions get slapped together), but whatever was the matter?

An earthquake. A wee tremblor. The Big One? Not bloody likely.

At approximately 0742 yesterday morning, a magnitude 3.6 earthquake burped momentarily just outside of Charleston. Yeah, seriously. You may not know it but we have two somewhat major rifts in a fault line that open up to each other in the Summerville area. The quake was the first sizable jiggle since a 4.1 quake in 1995 shook houses and cracked driveways in Summerville. Last year there was a 2.5 ripple over in Hanahan, and back in 2002 there was a 4.4 off Kiawah Island, rattling the silver tea services at several McMansions and causing one Biff Snodgrass to miss a putt on the Ocean Course much to the amusement of his attorney, P. Quattlebaum Moneybags IV.

A dozen or more quakes too small to notice happen most years in the Lowcountry. This one was an anomaly because it was actually noticed by people. However, in the grand scheme of things, a 3.6 is only moderately stronger than a squirrel fart. The “Big One” that old-school Charlestonians refer to (and panic over) was the August 1886 magnitude 7.6 quake that hit near Summerville. Two-thirds of the brick buildings in Charleston were destroyed or nearly destroyed and all the buildings in Summerville were at least damaged in some way.

Geologists indicate that massive quakes such as that one have occurred every 500 years or so in the Lowcountry, and the farther we get from the last quake the more likely it is to happen again. While we usually think of major quakes happening in California or Mexico or far-flung places like China and the “Stans”, research indicates a 40 percent to 60 percent chance of a catastrophic quake somewhere in the eastern United States in the next 20 years.

Now, in 1886 only about 1,500 people lived in Summerville. Today, some 150,000 denizens live in the immediate area of the quake zone, and even more in the outlying areas. Things will actually be much nastier the next time around. We’d like to think that the buildings are better constructed today, but with houses sprouting up like fungus after a summer rain (hence the term Mushroom Neighborhoods™) I shudder to think about the structural ability to withstand a good sound shaking. Plus, in 1886 we had fewer water mains, power lines, giant glass storefronts, natural gas pipelines, and gas stations full of explosive yumminess.

The source of all this fun is the Woodstock Fault, two rifts in the rock deep underground, one traveling roughly from the ACE Basin (the convergence of the Ashepoo, Combahee, and Edisto rivers) almost to Lake Moultrie, the other traveling roughly along the Ashley River. They open on each other underneath the river somewhere around Middleton Place over on Highway 61, hence Lowcountry temblors tend to occur in a zone around that opening.

The quake was centered at 32.950 degrees North and 80.197 degrees West, or just east of the intersection of Ashley River and Bacons Bridge roads south of Summerville. I passed by there a little less than 90 minutes previously crossing Bacons Bridge Road on Dorchester Road a couple miles from the epicenter. According to the US Geologic Survey’s earthquake website, the depth of the quake was 9.8 miles underground.
And as an FYI, on the Richter Scale, each magnitude level is 10 times stronger than the level before it. A 4 is 10 times stronger than a 3.

The North Ridge quake in California in 1994 was a 6.7 and the San Francisco quake of 1989 was a 6.9 magnitude. That nasty quake in China this year was an 8, as was the Mexico City quake of 1985. That big effing monster that caused the killer tsunami waves in 2004 in Indonesia was a mind-blowing 9.3, making it the second largest quake ever recorded on a seismograph. The honor of the biggest goes to a mind-boggling 9.5 that hit the afternoon of May 22, 1960 435 miles south of Santiago, Chile and its resulting tsunami affected southern Chile, Hawaii, Japan, the Philippines, eastern New Zealand, south east Australia and the Aleutian Islands in Alaska. It caused localized tsunamis that severely battered the Chilean coast with waves up to 82 feet high. The main tsunami raced across the Pacific Ocean and devastated Hilo, Hawaii; waves as high as 35 feet were recorded 6,000 miles from the epicenter.

So the next time you think it’s thunder, or a big truck, or a sonic boom, or some imbecile kid with giant subwoofers in his 500-dollar car on 5000-dollar rims, it could actualy be an earthquake. Or a squirrel fart.


Pictures showing damages from the infamous 1886 Charleston Earthquake, including a big fissure along the Ashley River. 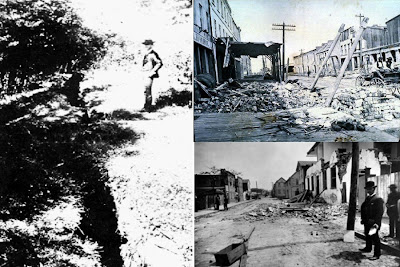