The American flag is under attack again. 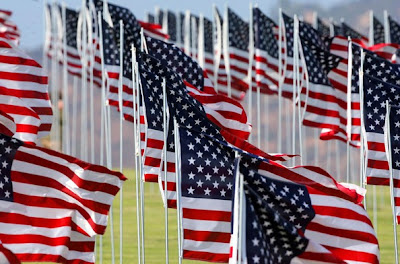 Sadly, I used to live a couple miles from where this story takes place. Prior to moving to South Carolina, I lived just off Main Road in Hampden, a suburb of Bangor, Maine.

The following article is lifted from The Bangor Daily News, written by Renee Ordway.

Wreaths? Sure. Pick your size and shape.

Welcome signs? Why not?

Those are many of the things that one may find on any front porch.

“You’ve got to be kidding me!” That was Darla Coombs’ response when she was told that the Highland Ridge Condominium Association wanted her American flag removed from its mount on the front of her condo.

“They told me if I felt I needed to fly the flag that I could do so as long as I put it in the back where it can’t be seen,” Coombs said during a recent telephone interview.

The Highland Ridge condos are located on Main Road South in Hampden.

The 16 or so units are all alike. Beige with white trim and white mailboxes lined up ever so neatly along the main access road.

And that, Coombs was told at a condo meeting, is how it shall stay.

With the obvious exceptions, of course.

A quick trip through the development this week showed that some of the condo owners like big wreaths. Some like small ones. Some like bows on their doors or garland on their banisters. Some like welcome signs on their porches and some don’t.

Individuality is allowed for flowers in the summer, Coombs said.

But there shall be no flags, and it says so right in the condo bylaws.

Coombs put the flag up, with the blessing of her immediate neighbor, when her son enlisted in the Army last spring.

The grumbling soon began, and by late summer a survey had been passed around. At a meeting last month, the American flag received the official Highland Ridge Condo Association heave-ho.

“Fine. I’ll pay to have a flag mounted on each and every condo,” Coombs replied.

But I want an Irish flag, argued one member.

I’d like to fly a California state flag, argued another.

There can be no flags, they told her again.

“But it’s an American flag,” she pleaded.

Aware that she did sign the lease and in an attempt to reason with the board members, Coombs asked whether they would agree to have a flagpole put up somewhere in the development if she paid for the pole, the cement pad and a light.

That idea got nixed as well because the Highland Ridge Condo Association didn’t want to get stuck with the additional electricity fees that the light would generate.

“I’m not a rebellious person by nature,” Coombs explained to me apologetically, “but it’s an American flag.”

“I never play the veteran card,” she said. “It’s not something I talk about to a lot of people, but I got angry enough at that condo meeting that I did, and then I was angry at myself for doing that,”

Venise Bard is the property manager for Highland Ridge Condos. When I asked her about the reason for the concern with the American flag hanging on Coombs’ condo, she said only that the rule is clearly written in the condo bylaws in the lease that Coombs willingly signed.

She’s absolutely right about that.

Coombs held her ground for a while and left the flag up, but knew what she had to do in order to avoid any further controversy.

So on Friday, she dutifully went home on her lunch hour, removed the flag and tucked it away.

I’m sure the place looks a hell of a lot neater now and I’m sure that the members of the Highland Ridge Condo Association will sleep better tonight knowing it is gone.

That’s surely not a battle they want to have to fight again. They won and they can take their Saturday morning stroll through their impeccable development this morning and stand taller for it.

I strongly encourage all of my readers to contact the Highland Ridge Hampden Luxury Condominiums...and make your feelings well-known.

Unreal. Absolutely unreal! The obvious hatred of America aside, one would think that after multiple media exposures of this kind of shit and retraction by HA's, these idiots would know better.