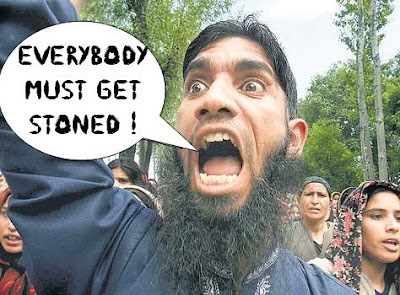 I know all of you Obama Kool-Aid drinkers and tofu-eaters are too wrapped up in your frenzy to elect your Messiah into office to notice the rest of the universe, but while you’re busily trying to flush our country down the crapper, some other societies that you Liberal Socialists love to molly-coddle and cozy up to are committing more heinous acts.

In Somalia, a 13-year-old girl who said she had been raped was stoned to death after being accused of adultery by Islamic militants, according to reports.

Amnesty International and Somali media reported, citing witnesses, that dozens of men stoned Aisha Ibrahim Duhulow to death on October 27 in a stadium packed with 1,000 spectators in the southern port city of Kismayo. The Islamic militia in charge of Kismayo had accused her of adultery after she reported that three men had raped her.

Regardless of age, this is outrageous. She was a victim twice over; once by the scumbags who raped her, and again by the thugs and scumbags who killed her.

And in Pakistan’s largest city, Karachi, police raided a wedding between a 7-year-old boy and a 5-year-old girl, arresting both the Muslim cleric officiating at the ceremony and the children's parents, deputy superintendent of police Malik Mazhar said Friday.

The cleric, Mulana Gul Hussain Kamal, had not yet begun the ceremony, which was attended by 100 guests. Pakistani law forbids marriage below the age of 18, but as far as they're concerned Muslim law trumps any other laws and some Muslim scholars say it is permissible if the bride and groom have reached puberty. Last I checked, five and seven added together barely make puberty. At that age, boys and girls still each consider the other to be “icky” and having “cooties”, so why the hell would any sane, rational person think this is cool? Oh wait, it's Radical Islam...it's neither sane nor rational. 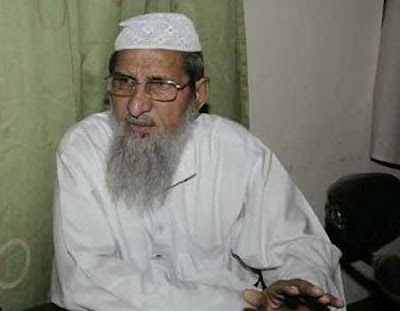 The presiding cleric, Mulana Gul Hussain Kamal, or Reverend Asstard to you and me.

TV footage showed both children in traditional wedding clothes in the laps of policemen after the raid, the girl with tears running down her cheeks. (Gee…Ya’ think? She fears the consequences of not being properly sold as property.)

The parents said the wedding had been arranged to end an eight-year feud between the two families, according to a report on Express News TV. Mazhar said he had heard about similar cases in rural areas but "it is shocking to have this right in the center of the city."

The parents would be brought before a court on Saturday, he said. A Pakistan Human Rights Commission official, Hina Gillani, said the maximum possible punishment for the parents was one month in jail and a fine of just over $10. Likely, they’ll just be sent home and the little girl will be stoned to death for continuing the feud and for embarrassing the family. If not, they’ll just wait a few months and then sell her off to someone else like a head of cattle. As a female in a fundamentalist Islamic state, she’ll never be more than property.

Oh, wait…make that less than property. A housepet wouldn’t get stoned to death for getting humped by the neighbor’s cat. 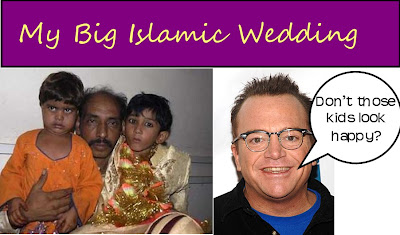