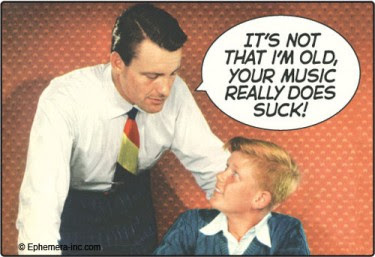 It's been quite a while (August maybe?) since I last perused the Billboard music charts to see what passes for popular music these days. As we all well know, I tend to avoid Top 40 radio like Taylor Swift avoids long-term commitments. Occasionally, however, I punish myself by listening in to at least stay somewhat current and feel less like the middle-aged guy who clings to his 80's New Wave with white knuckles.

So, I decided to check the Billboard top 40 chart and see what dreck & drivel the empty suits at the record labels are currently passing off on the masses.


Selina Gomez-- Come And Get It
Forever tainted by the evil touch of Satan, ie: Justin Bieber, Gomez has been performing this track on any show that will book her, from the MTV Movie Awards to Ellen to Dancing With The Stars and in pretty much every case she's in some mock Indian sari getup with dancers of various ethnicity decorated with a bindi, because all you need is a red dot on your forehead to make you an authentic Indian in Gomez' world. I'll assume the reason for the pseudo-Indian garb is the bhangra beat to the chorus. The song isn't completely terrible but honestly, if I want Indian I'll go authentic with the 2000 track "Darshan" by B21.Selina, dear, stay away from that Bieber chick. She's trouble.

Feel This Moment-- Pitbull featuring Christina Aguilera
One has no hair, the other has hair like old straw. One wears a tailored suit, the other looks like a leather sausage. This sounds pretty much like the last Pitbull song I heard, the same rap cadence of lines over a remixed sample of a classic song. Last time it was Mickey & Sylvia's "Love Is Strange" and this time the creativity is provided by A-ha's "Take On Me". At least Christina keeps the caterwauling to a minimum and refrains from yodeling vocal runs.

Justin Timberlake--Suit & Tie
Christ, this song is inescapable. On a good day my car radio can pick up five or six Top 40 and/or A/C stations and I swear to Gawd, I heard this on every single one of them in a 30 minute span. I think JT is a decent actor and a very funny guy, and I respect him musically but this new throwback soul style is utter crap. Plus, I detest Jay-Z.

Rihanna featuring Mikky Ekko--Stay
There seems to be an unwritten law that says every 90 days there must be a new Rihanna single whether we want one or not. A ballad, damn near a funereal dirge, pretty enough but after a bit it just seems to drag. Never heard of this Ekko fellow before (born John Stephen Sudduth) but his voice is actually a bit higher than hers here. At least she's spending time with a guy who isn't using her as a punching bag...

Psy--Gentleman
Well, we all thought Park Jae-sang, better known as Psy, was going to be a one hit wonder after Gangnam Style took the universe by storm last summer. While not as instantly catchy as his last single, this one's video is just as amusing, with Psy being basically a dick to everyone he meets.

Macklemore & Ryan Lewis featuring Wanz-- Thrift Shop
This song is effing ridonkulous but gets in your head & stays there like a recurring yeast infection on a 2-dollar hooker. A rapping white kid going on about buying second-hand clothes at Goodwill. He does make the valid point about a-holes wearing $50 designer t-shirts thinking they're unique till they see 5 others wearing the same shirt at a club.

Pink featuring Nate Ruess-- Just Give Me a Reason
I've always adored Pink. She's badass. This is one of her finest vocal performances, with help from the guy who sings for the band fun., whom I have previously  been wrong about when I guessed they'd fade into obscurity as quickly as they appeared. However, like all Pink songs, this is getting played ad nauseum, so I'm already bored with it.

Icona Pop--I Love It
I just heard this song for the first time a couple days ago and really liked it. It's great technopop dance music from Sweden and hopefully it won't get ruined by overplay. Finally, something on the Top 40 chart I can get into. I dare you to sit still while listening.

So.....what else SHOULD you be listening to?

Capital Cities-- Safe and Sound
Found this gem by accident listening to Sirius and it was love at first listen. Great beats, catchy hooks, impossible to sit still while listening. This is my new jam for Spring. Even features live trumpet instead of a sample, and it really makes the song. This is just one of several clever videos out there for this song.


The Airborne Toxic Event--Timeless
Another accidental finding on Sirius. A few years back I fell head over heels with their song "Sometime Around Midnight" and even named it one of the best songs of 2008. This one grows on you quickly.

Radioactive/It's Time--Imagine Dragons
Took me awhile to finally get into these guys. I've been let down by so many newer alternative/modern rock bands that I'm reluctant to get into bands that are heavily hyped on alternative radio. Both of these songs are really great.

Tegan & Sara--Closer
Twin sisters Tegan and Sara Quin have been around awhile, an indie staple and a closely guarded secret of sorts.  I think I first heard them in 2004 with their song "Where Does The Good Go". This is a great pop track that should break them huge. Catch them opening for fun. this summer.

The new album is called Delta Machine, and while I'm sad that it wasn't close to the glory that was "Violator" there are some good tracks on it, and the new single is in my opinion the best track of the whole CD. Whereas the first single "Heaven" was an austere minimal ballad, "Soothe My Soul" is a dancefloor stomper with a dark, murky, sensual edge, just the way a Depeche Mode song should be. Play it LOUD, friends, and see what a 32-year career as the cutting edge of music brings to the table.