Above the law? Not hardly. 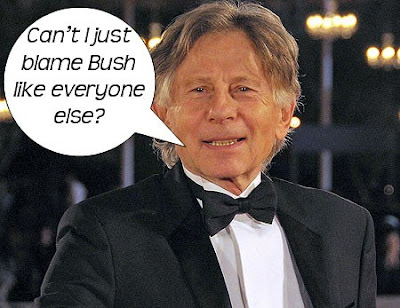 Disclaimer: Yeah, this is old news by now. So what? I have a job and a family, so sometimes I have to wait a couple days to write on stuff that catches my attention. Spare time to write is something that I sorely lack. Anyways…


I have no biological children, even at my advanced age of 40, so some of you may think that I am unqualified to make a parental statement. But I think it’s safe to say that if some 43-year old man fed my 13-year old daughter a mix of bubbly and Quaaludes and then had sex with her, and she was too doped up and scared to resist or even to report it, it’s safe to say that the aforementioned rapist would soon be ventilated by several 230-grain jacketed hollow-points. I don’t exactly have a soft spot in my heart for kid-diddlers.

So, it really galled me this week to hear about all the Hollywood assholes coming out in droves in defense of Roman Polanski.

French Foreign Minister Bernard Kouchner called Polanski's arrest a "bit sinister."
Really, Bernie? I find France’s harboring of a fugitive child rapist a bit sinister. Then again, you assholes also let convicted murderer Ira Einhorn hang out in your country for 20+ years too before he got busted again and sent home to face justice. I guess him and Polanski used to sip lattes together at the American Fugitive Bistro on the Champs Elysees? At times it wouldn’t surprise me in the least if you’ve been letting Joseph Mengele rent a villa on the Riviera.

Polanksi’s agent, Jeff Berg, has said that justice has already been served in the Polanski case. Really? How’s that, Jeff? He’s been treated like Hollywood Royalty across Europe for 30 years, despite the fact that he’s really not that great a director and his movies ain’t all that.

Frederic Mitterrand, the French culture minister, said, "In the same way as there is a generous America which we love, there is also a certain kind of America which is frightening, and it is this America which has now shown us its face." Just keep remembering the face of America that kept you from speaking German twice in the last century, pal. You’re welcome.

Noted film producer Harvey Weinstein had the audacity to open his festering suck-hole and say that ,"Every US filmmaker [should] lobby against any move to bring Polanski back to the US. Whatever you think of the so-called crime, Polanski has served his time."

So-called crime? Perhaps in your house it’s okay to bugger little girls? He didn’t serve any time. He had, as journalist Eugene Robinson put it, a “gilded exile” in his native France. While I personally would go a little crazy after 30 years in France, he wasn’t exactly in a harsh environment. You’re an asshole, Harvey. You effete, smug, Hollywood bastards all think it was okay to drug and rape a kid, just because Chuck Manson killed the guy’s wife and child? That doesn’t give him a free ride to feed a kid drugs and booze, put his wang in her mouth and her kiester, and then flee the fucking country. 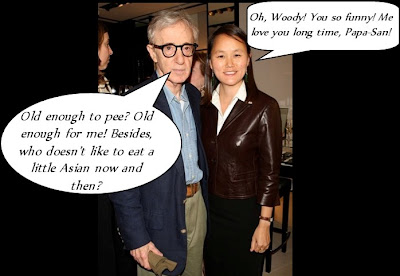 Of course it’s no surprise that Woody Allen thinks this schmuck’s a class act. Although Woodrow likes to bang his own kids and not other peoples’…

And Whoopi Goldberg? Holy shit... It wasn’t rape-rape? I suppose you were okay with Megrahi going back to Libya because it wasn’t terrorism-terrorism? Maybe the Holocaust wasn’t genocide-genocide? Let’s free OJ Simpson because while he did get away with murder-murder, he shouldn’t be in jail because it wasn’t kidnapping-kidnapping. However I guess you should stick with flapping your gums on that crapfest TV show The View because your standup wasn’t comedy-comedy and your movies weren’t all that good-good. 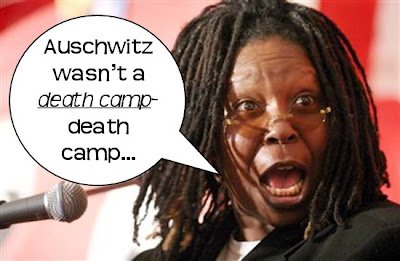 At least a couple people out there have some common sense, though.

Sherri Shepherd, also on The View, made the very valid point that we chase down 75 year old Nazis. True ‘dat. So why shouldn’t we hunt down 76-year old rapists?

Luc Besson, director of last year’s film Taken, refused to sign a Hollywood petition calling for Polanski's immediate release. "There is one justice, and that should be the same for everyone," Besson said on French radio. "I have a daughter, 13 years old. If she was violated, nothing would be the same, even 30 years later."

From Alison Arngrim, the actress best known for her work in “Little House on the Prairie” and who has spoken publicly in the past about having been sexually molested as a child, came this: “If Roman Polanski were a Catholic priest or a Republican senator, would these [Hollywood] people feel the same way?”

Not a bit, Alison. They think that being a Hollywood elitist or a Democrat means that it’s okay to commit crimes with relative impunity. No one’s talking about the fact that David Letterman was screwing his female employees (most assuredly behind Regina Lasko’s back), but instead are covering it over by focusing on the extortion attempt.


I hope like hell that George W. Bush is having a great laugh at Letterman’s expense. 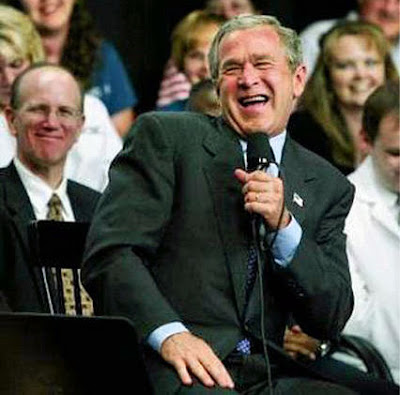 WTF??? These damn Hollywood liberals and there illogical rationales for justifying POlanski's unjustifiable, sickening, and criminal behavior. Liberals have the most warped and dimented brains ever!

I love the picture of Bush! And the caption. Letterman deserves his just desserts.

all the assholes who think polanski did nothing wrong should be forced to let him serve house arrest, at their crib, with just their 13 year old daughter or granddaughter present to supervise him.

Steve - I fit into the "non-parent parent" category as well, and agree completely.

And as much as I agree about Bush having a good laugh, I bet Palin's having the same right about now...

Absolutely brilliant, Steve! I think I just woke my family up by laughing.

well, it's oldish news but you SURE put a fantastic slant on it and gave us fresh information, LM! GOOD JOB!
A terrific read...

You might be surprised to know that most EUropeans also feel like you and I; only most of their celebs don't.......like ours mostly don't want him brought to justice. That says a lot, doesn't it? As for Whoopi.......super analogy...

Steve, love it. But you know that the Blame Bush Doctrine is official Democratic Party policy until at least 2067. It's gonna be a long time until those morons tire of blaming the universe's problems on one man...

OMG, I almost fell of the couch laughing at the Whoopie Goldberg pic. Not a death camp, death camp. Hee!