And the Trayvon Insanity Festival keeps rolling on


So now come all the protests and calls for justice and Race Pimps like Sharpton and Jackson calling for people to boycott Florida, boycott Disney, and boycott oranges and orange juice. Jackson's soundbyte calling Florida an apartheid state was even more unintelligible gibberish than he usually spouts. It was priceless.

Okay....so now if I go to Disney there might be shorter lines? Great! and if the boycott lingers maybe they'll drop their insanely high prices? I'm in!

There will be more oranges and orange juice for me now. Thanks. Much appreciated.

I live in South (By God) Carolina, where we've allegedly been under a boycott by the NAACP for a good decade-plus. Actually, since 2000... They object to the fact we stage Civil War re-enactments that don't portray the state as the bad guys one step removed from Nazi Waffen-SS stormtroopers and we have a Confederate flag in front of our State House. Not surprisingly, the boycott has really meant bollocks and our tourist economy still thrives.

Now, moving up I-95 into the Peach State of Georgia...the quaint antebellum city of Savannah is about 80 minutes down the road from me and I visit it a couple times a year. One of their local nightclubs, called Frozen Paradise,  is making national headlines after their Facebook page started advertising their upcoming Blackout Party for Trayvon Martin.

Yes, you read that right. 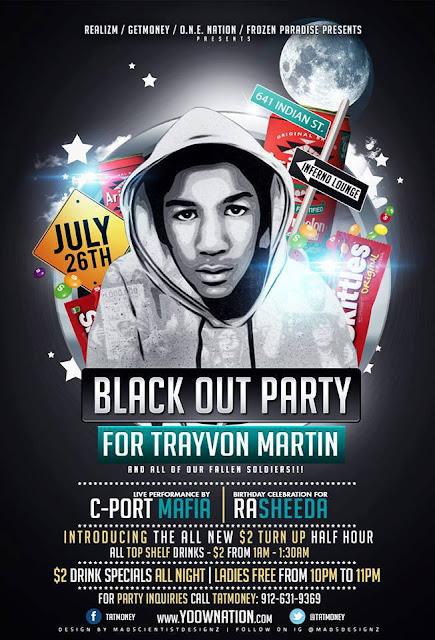 Nothing quite memorializes a dead teenager quite like $2.00 drink specials. I guess two bucks is about the cost of an Arizona tea and a bag of Skittles so is that the connection to a kid 4 years under the legal drinking age? Hopefully the ghost of Trayvon won't mind sharing his special evening with birthday girl Rasheeda...It would be a shame if Mr. Tatmoney got sued by the Martin family for using that pic of Trayvon, because they copyrighted his likeness to avoid people making a buck off their kid. I hope the copyright holders for Arizona and Skittles get wind of this too.

To add insult to injury, as if this wasn't already tasteless as hell, there's the line underneath that mentions "all our fallen soldiers". How galling. Are you people equating a kid suspended from school, whose Twitter feed was full of pics of him flipping the bird, blowing smoke rings, and showing off an illegal handgun in his possession, with American soldiers killed in the service of their nation in the theater of war? If so, you are classless in a way you are incapable of even understanding. Actually, in looking at it again, you aren't equating Trayvon with fallen soldiers, because the party is for Trayvon and you added the soldiers in really tiny print as an afterthought. Making a buck off the backs of dead soldiers is dispicable.

I guess making a buck is Justice for Trayvon? Then again, this fiasco is presented by people named TatMoney and GetMoney.

Justice for Trayvon...the new hip, chic cool catch phrase. May as well have its own ribbon for celebrities to wear as their du jour cause célèbre.

What about justice for Amy Gibbons and her five year old son? Who are they, you ask? Amy was a young white woman who had her head bashed in by a black man who then set fire to her house. she died from blunt force trauma. Her five year old son died from smoke inhalation in the fire. Derek Posey killed two people for a cell phone and a debit card, but the major networks didn't make a big deal about it because the perp was black and the victims were white. 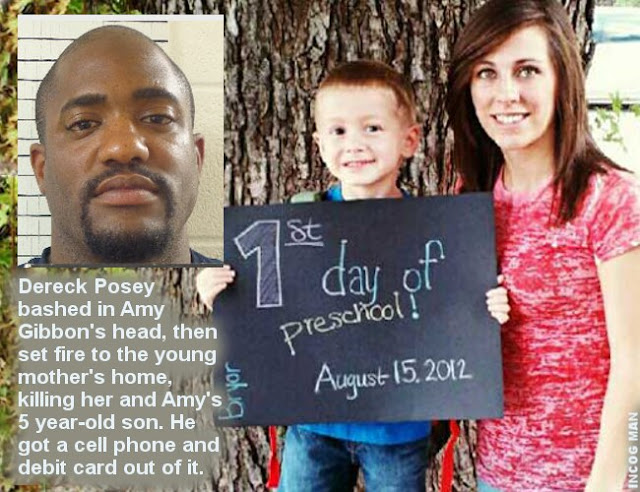 A lot of people are sniveling about how the Zimmerman jury had no black people on it because the victim was black. Well, the victim wasn't on trial, dickheads, and it's a jury of one's peers. I guess the attorneys involved, who select the jury, felt that the six women they selected were of a certain peerage with Zimmerman. Nationwide, there are a shortage of blacks, especially black men, able to serve on jury duty. Why? Felonies.

According to one Georgia study, for example, in some counties more than half of black men are excluded from jury service because they are convicted felons. According to another study, almost one-third of black men nationally are barred from jury duty. In Seminole County, Florida (where the Zimmerman trial was held) jurors are automatically disqualified if they have ever been convicted of a felony, or if they are currently facing a prosecution – rules that apply in most of the United States. Don't blame me; I'm just the messenger.


Oh, wait, go ahead & blame me. I'm a middle-aged white guy. Therefore, I must be a racist. Meanwhile, take no responsibility or blame for your own actions. It's never your fault. Evil Whitey holds us down. 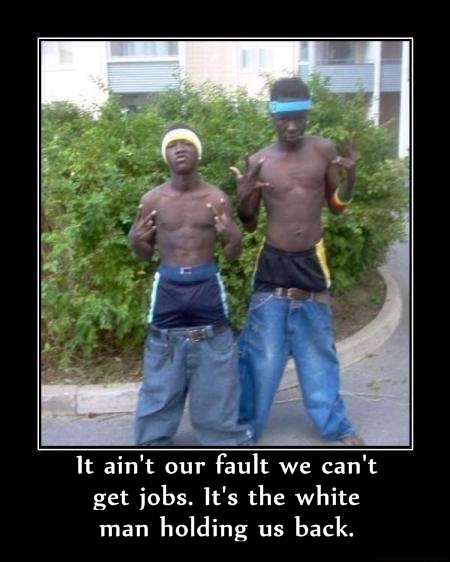 Maybe if you hear it from the mouth of a young, educated black man, it will sink in?