High Fructose Corn Syrup Will Be The End of Our Species 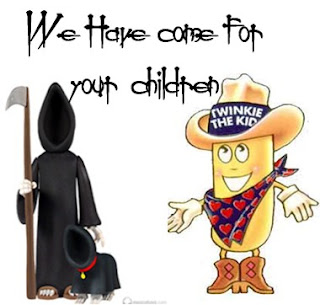 I recently got back in touch with a friend from high school whom I’ve only seen once in the past 20 years, and that was briefly at our ten-year reunion. She and her husband, another classmate of mine, live a fairly simple, unfettered life in rural Vermont. She was worried that I’d poke fun at her “crunchy” lifestyle of tofu & veggies, but the more I think about it, Anne and Greg & their two kids will probably still be nibbling granola well after the rest of us are nibbling dirt. Why? Preservatives and high-fructose corn syrup, dummy.

The way I look at it, the last generation of healthy Americans was the generation that fought WW2. They grew up on farm-fresh perishable foods and stuff that didn’t have artificial colors and sweeteners. They canned and smoked their own foods. They got meat at the butcher shop and produce at the farmer’s markets. The milk didn’t have artificial growth hormones and came fresh to your door.

Then after WW2 when technologies changed, came the "miracles" of modern science, like TV dinners and sugary snacks and preservatives. The chemicals and shit everywhere were gobbled up by the Baby Boomers, who are the parents of my generation. My generation of kids, who were born in the late 60’s and early 70’s, I'm convinced our DNA was subtly altered by those chemicals, as well as all the drugs our parents took. I know I grew up on sugar-frosted everything, with chemicals and preservatives and unpronounceable words on the ingredient list, and USDA-approved artificial colors that don’t occur in nature. Now take a look at our kids…

As a school-aged student, I’d only vaguely heard the term “ADD” and I was in my early 20’s before I’d ever heard of Ritalin. Our DNA has changed enough to where the children spawned by my generation have so many chemical imbalances that they get diagnosed with an alphabet of syndromes and disorders before they make it past third grade. My generation grew up eating Twinkies, which have a shelf life longer than that of most nuclear waste. You could bury a Twinkie in the ground and dig it up 5 years from now, and it’ll still be edible. You can’t kill a Twinkie. They’re the Rasputin of snack foods. Whereas our parents’ generation smoked pot and dropped acid, and sometimes did heroin, my generation added cocaine, crack, paint huffing, Ecstasy, and crystal meth to the mix. I’m surprised our kids don’t have tentacles and scales. I’m beginning to think that Ritalin is part of the school lunch program these days, since so many kids are on it. But hell, Ritalin is just the Gateway Drug now. We’re building up immunity to it. Throw in Adderal, Clonadine, Tenex, Strattera, and Concerta to the stew. It’s shocking how many kids today need all these chemicals to correct imbalances in the genetic code.

High fructose corn syrup (HFCS) will be the death of the human race. I defy you to go an entire week without eating or drinking something without HFCS as an ingredient. It’s damn near impossible anymore. When something is “sugar-free”, it usually means that instead of refined & processed white sugar, it’s instead loaded with enough HFCS to embalm a corpse, or some other even more insidious sweetening agent, like Aspartame or Splenda or some other chemically-enhanced concoction. Studies are showing that HFCS has a negative effect on metabolism and is a contributor to the pandemic obesity in the western world. Take a minute and walk over to your fridge. Start reading the labels and I guarantee you’ll find HFCS in more than you thought. I work at a dairy, and in a span of less than 45 seconds I found 3 products with HFCS in them in my storage cooler, and that was before I opened the ice cream cooler. There’s ketchup, BBQ sauce, pretty much every soda on the market, Thomas’ English Muffins, 9 outta 10 breakfast cereals, Miracle Whip, many cough syrups, all those Lunchables we stuff in our kids’ lunchboxes, Ocean Spray Cranberry drinks, even Wonderbread; all have HFCS as ingredients somewhere. The mesquite marinade I used at dinner had it listed as the first ingredient.

When I was a kid in the 70’s they pulled Saccharin off the shelves as a sweetener because it caused cancer, and yanked the drug Thalidomide, which was supposed to help with morning sickness but instead caused massive birth defects like missing limbs. The FDA approved both products and then had to recant, so who’s to say what the latest round of government-sanctioned yummies will do? The chemicals very well may be harmless when alone flying solo, but what happens when they all start to combine? Exposure to multiple layers of chemicals can cause myriad issues.

I read a book a few years ago that was written by Michael Donnelly, a former USAF fighter pilot who was suffering from ALS, or Lou Gehrig’s Disease. He thought that his ALS, which cripples the nervous system, was brought about by exposure to multiple chemicals while in the first Gulf War. Prior to deployment, he was exposed to pesticides on his base as they sprayed for mosquitoes, then the military had him take pills that were anti-malarials and others that guarded supposedly against chemical-warfare agents, plus he had to fly through clouds of burning oil smoke. That smoke was chock full of burning petroleum residues, and who knows if there were various chemical weapons burning into the air too? If you think Gulf War Syndrome isn’t real, then why is the rate of birth defects, miscarriages, and other unexplainable health maladies so high in Gulf War veterans? In his book, Donnelly stated that the rate of ALS amongst Gulf War vets was 37 times the national average. Major Donnelly died in 2005 from his disease.

Oh yeah, our DNA is changing as a result of preservatives and chemical exposure and shitty lifestyle choices. Won’t it be ironic when intelligent life from some other galaxy lands on Earth and finds that humans went extinct as a result of the wondrous crap they created to prolong their lives? Oh well, at least they’ll have Twinkies to eat.
Posted by Steve: The Lightning Man at 5/12/2007 11:18:00 PM