Tinky Winky Gets the Last Laugh 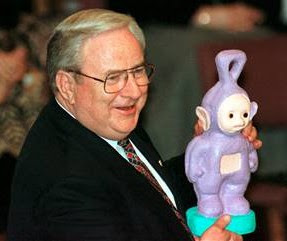 Jerry Falwell, the TV evangelist whose 1979 founding of the Moral Majority (which was neither) galvanized American religious conservatives into a political force, died Tuesday at age 73. While in no way am I going to sit here and be happy that a man is dead or that his family is grieving for their loss, I will say that at least there’s one less religious extremist fringe kook to worry about meddling in politics.


Born to a man who sold bootleg whiskey during Prohibition, Falwell said religious voters "cannot be silent about the sins that are destroying this nation," which he identified as pornography, abortion, "amoral liberals," drugs, welfare and the abandonment of biblical morality. To him, it seems there was no separation of church & state; he wanted the church to run the state. On the heels of 1973's Roe v. Wade case, Falwell was spurred to create the Moral Majority Coalition. Using the organization as a bully pulpit to rant against abortion, pornography and a host of other issues he deemed in defiance of God's will, Falwell became a lightning rod for controversy, having the audacity to say that AIDS is God's punishment for homosexuality.


In 1999, he told an evangelical conference that the Antichrist was a male Jew who was probably already alive. Falwell later apologized for the remark but not for holding the belief. Hey, Jer, in retrospect, ya’ think maybe the Antichrist could be an Islamic fundamentalist? Or perhaps even a pseudo-Christian in disguise?

Shortly after the Sept. 11, attacks, Falwell had to apologize after televised comments in which he described the attacks as a judgment on America for "throwing God out of the public square."


"I really believe that the pagans, and the abortionists, and the feminists, and the gays and the lesbians who are actively trying to make that an alternative lifestyle, the ACLU, People For the American Way, all of them who have tried to secularize America," he said. "I point the finger in their face and say 'You helped this happen.' " . Again, an insincere apology done to placate the masses.


Often his statements were received by most as absurd, such as his virulently anti-gay attack on Tinky Winky, the purple, purse-toting character in the "Teletubbies" children's show. His National Liberty Journal warned parents that Tinky Winky was a gay role model and morally damaging to children. Falwell charged that because Tinky Winky had a triangle on his head and carried a bag, he was a symbol of homosexuality. What the fuck? All the deranged shit on TV, including scandalized fellow televangelists like Jimmy Swaggart (sex scandal), Oral Roberts (the whole 900-foot Jesus and spurious fund-raising techniques), and Jim Bakker (sex scandal and skimming money), and he picks on a dude in a costume making goo-goo noises to entertain babies? Please…


In the mid-1980s, Falwell found himself at the center of what would become a landmark First Amendment case. Hustler magazine published a parody ad of him suggesting drunkenness and incest. Falwell sued publisher Larry Flynt and the magazine for libel. He didn’t win the libel claim, but in 1984 he was awarded $200,000 for emotional distress. The case made its way to the U.S. Supreme Court, where the original verdict in favor of Falwell was overturned. The details of the case were played out in the 1996 film "The People vs. Larry Flynt", quite humorously, I might add.


Just a week before his death, Falwell told CNN's Christiane Amanpour that he needed at least 20 more years to accomplish his vision for his Liberty University. Falwell told the story of Hezekiah, who in the Bible asked to live for 15 more years and was granted that wish. "I'm praying the same prayer with an option to renew," Falwell said. Guess somebody wasn’t praying quite hard enough, huh?


Seldom in recent history has one person used their position of influence over the masses to spread so much hateful rhetoric against others. Blaming gays for the 9/11 attacks is like Hitler blaming Jews for Germany’s woes after World War One. Saying the Antichrist was a Jewish male was meant to rally his right-wing Christian army against Jews, like Hitler rallied his supporters against Jews. Both came from humble, troubled beginnings and both dabbled in influencing politicians, though only one went into politics himself. Both were considered harmless kooks by many, until it was too late in Hitler’s case. Both used to media to propagandize and influence the masses. And while both had many who mourned their deaths, there were a lot more breathing a sigh of relief.
Posted by Steve: The Lightning Man at 5/19/2007 08:46:00 PM