Well, if the Lamestream Media is to be believed, Nobel Peace Prize recipient Lord Barry Hussein Sotero, Black Jesus Himself, will make good on his blathering "red line" promise to bomb angry brown people in a third world country in between golf games sometime on Thursday.

I love how the media gets to broadcast our intentions so the enemy can prepare. They did it all throughout Iraq and Afghanistan, broadcasting troop movements & deployments and withdrawals and redeployment dates. They tried like hell in Gulf War One too; as a Military Policeman I had to turn away CNN reporters filming the railhead and wanting interviews at Fort Riley when 1st Infantry Division was sending its gear over to Saudi Arabia. If they could have, they would've blown the D-Day Invasion and the A-bomb drops on Hiroshima & Nagasaki by telling everyone we were coming and sparing no details.

Remember, when Navy SEALs and Marine recon elements landed on a beach in Somalia in 1992, CNN carried it live and lit up the beach with camera lights so the Skinnies could better see our troops, who had their night vision blinded by the lights.

So the Syrian government knows we're coming.  And, contrary to popular belief, they actually do have a somewhat decent air defense network sold to them by the Russians.

The bulk of the American people aren't in favor of us getting into yet another shooting war. I'm not exactly sure who the hell it is that we're supposed to be helping. The government under Batshit Asshat is unfriendly towards us. There's nine different rebel groups, and seven of them are in league with Al Qaeda and thus unfriendly towards us. The government denies using chemical weapons against the rebels, of course. Oh, hey, yeah, chemical weapons...you know, like Saddam used on the Kurds...and like the kind of WMD's we were unable to find in Iraq when we invaded...in fact were the crux of the reasons Bush gave for invading in the first place...Hey, W, I think we found your missing WMD's!!! Just a decade late and of course Barry will take credit and blame you for anything that goes wrong.

Support for some sort of international military response was likely to grow if it is confirmed that Assad's regime was responsible for the August 21st attack in the Damascus suburbs that activists say killed hundreds of people. CNN reports that rebel officials say more than 1,300 people, including many women and children, died recently as a result of chemical weapons. The group Doctors Without Borders put the death toll at 355 and I tend to believe their assessment.

Question: If the Syrian government is beating the rebels quite handily using conventional weapons, as most reports claim, then why even bother to use chemical weapons in the first place, especially knowing the international outcry will be decidedly negative?


So we've got four destroyers loaded down with a mix of missiles in their Mk-41 Vertical Launch Systems. The media mistakenly keeps calling them battleships, because the media is stupid and ignorant and thinks all words are interchangeable. Then again the average civilian is also just stupid and ignorant enough to believe them. Remember, every weapon is an AR-15 or AK-47 assault rifle, especially if they're black & scary-looking...So we have the destroyers USS Ramage, USS Barry, USS Gravely, and USS Mahan floating offshore, with a fifth on the way. Each has a mix of up to 90 missiles but some of those are anti-aircraft missiles. That's the beauty of the Mk-41 system; no one knows what's in the tubes. They could have one ship tasked for air defense with nothing but Standard anti-aircraft missiles, and the other three could all be loaded with Tomahawk land-attack cruise missiles (which the media calls Ballistic Missiles, which they are not).

Speaking of Tomahawks, we may or may not also have two submarines, USS Georgia and USS Florida, hiding out over there. These used to be ballistic missile subs but were converted into platforms for Tomahawks, carrying up to 154 missiles each. They also carry detachments of SEALs more often than not. How convenient.


Two of the aforementioned ships, USS Florida and USS Barry, have done this before. Two years ago, when we stuck our nose into Libya's civil war, USS Florida started the attack by launching about 90 missiles to eradicate Libya's air defenses so air strikes could come in after. USS Barry also launched Tomahawks at Libya in 2011.

The problem with cruise missiles is overflight. Even close U.S. allies are uncomfortable allowing American missiles to fly over their territory en route to their targets: Saudi Arabia and Turkey both banned U.S. missile overflights in 2003. Red Sea firing positions would probably require Tomahawk missiles to fly over Jordan, necessitating that country’s permission. By contrast, firing from the Med allows direct access to Syria. But with just 100 miles of coastline and more and more warships arriving, Syria’s waters could get real crowded real quick.

Fewer of our alleged allies are cool with us flying strike aircraft over their territory to bomb folks either. Everyone looks to us to be the world's police force and then hamstrings us, leaving us holding the bag and footing the bill. The Brits are out there with us offshore, though. God love 'em, we can always count on them to have our backs. 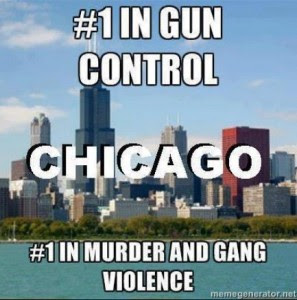 So, Barry is itching to go to war over an alleged attack that left perhaps 500 people dead. While that is, of course, in and of itself a tragedy, it's a tragedy in someone else's country and we have problems here at home. We had 532 murders in Chicago last year and have already hit 300 this year. Maybe we need to invade Chicago for its own good and clean out the government there? We keep saying the Syrian regime is corrupt, but nothing on earth is more corrupt than Chicago politics. The people of Syria are beleaguered and downtrodden, much like 99% of Chicago's citizenry. Those who would like to change the government need supplies and weapons, and the law-abiding citizens of Chicago are unable to own any weapons to defend themselves against thuggery and evil.

Seriously, charity begins at home, so if we're gonna send our troops somewhere to help out people in need, by God we should send in a division to clear out Chicago, and another to Detroit, and then go on to San Fransisco and Los Angeles and New York and, dare we even hope, to liberate Washington itself.

this shit will be over by the time the vacationer in chief finishes playing 20 rounds of golf, eating an entire wagyu cow, by himself, and summons reggie love over for a marathon round of pinochle.

his position on whether to sell out israel and get American troops killed during spending cuts to the military due to his sequester, is evolving.