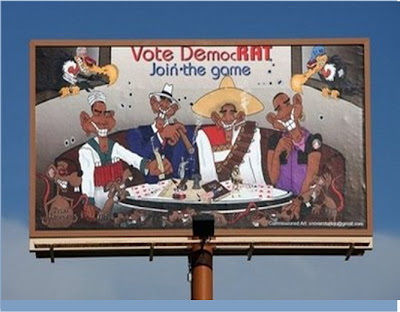 It seems that over in Grand Junction, Colorado a billboard depicting Barack Hussein Obama (Mmmmmmm Mmmmmm Mmmmmm) as an Islamist suicide bomber, a gay dude, a gangster, and a Mexican bandit has triggered a shitstorm of criticism. Imagine that..

The poster of the Chosen One, under the headline "Vote DemocRAT" -- was attracting attention from media worldwide and from people clogging a local parking lot for a closer look.

"It’s beyond distasteful, and it’s disrespectful of the commander-in-chief," said Martelle Daniels, chairwoman of the local Mesa County Democrats, calling it "clearly racist and homophobic….Certainly (it) is not designed for intelligent discourse at all,"

Of course, Martelle. Break out that cry of racism as fast as you can. I also bet you laughed your ass off at all the anti-Bush artwork offered up by The Left when W was in office. Up on your bookshelf, next to the works of Marx, Alinsky, and Obama, I’m sure you have a couple editions of those collected Bushisms and speech gaffes that were all the rage earlier this decade.

Beneath the caricatures of our Dear Leader are rats, labeled as trial lawyers, the IRS, the EPA and the Federal Reserve bank. The figures are flanked above by vultures.

The billboard is the work of artist Paul Snover, who frequently posts on Tea Party websites. When asked who commissioned the work Snover told the Grand Junction Daily Sentinel in an e-mail that he is "not allowed to say" who paid for the billboard.

Dennis Lucas, the Grand Junction businessman who owns the billboard, said that he was not at liberty to divulge who it was rented to.

Barely up for a few days, it has already been taken down amidst public outcry and sniveling after Lucas received death threats from peaceful, free-speech-loving Liberals.

Over on Facebook I spotted a great quote from a fellow named Clay who quipped, ”I bet you $10,000 it was put up by the Lefties under some fake right-wing sounding name, like Freedom Free People for Free Freedom”.

It wouldn’t surprise me if the billboard was paid for by George Soros to cause dissent and rile up the Left a couple weeks before the election. Mesa County is a pretty Conservative bastion in fairly Liberal Colorado. Leave it to Soros or one of his cronies to foment some anger & hate & mistrust and generalized bad ju-ju and make it look like a Tea Party group did it.

Pay no attention to the man behind the curtain……

I would not be at all surprised, either, if it were Soros or someone like him.

It cracks me up how leftists screech about free speech... Except when it's speech they don't like.