Who teaches these assholes how to drive? 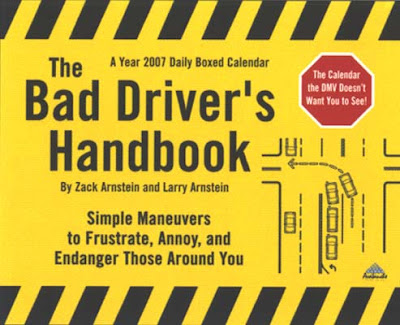 Allow me to preface this little rant by stating my qualifications to comment on the topic at hand. I am a licensed professional. I hold a current Class B Commercial Driver’s License, or CDL. I partially make my living by driving. I have about 18 years experience behind the wheel, including my time driving in the Army. I’ve driven in 4 different countries (The USA, Canada, Italy, and Germany), sometimes at high rates of speed, through countrysides, on trails, over mountains, on Autobahns, and through major cities like Toronto, Montreal, Boston, New York, Washington, Stuttgart, and Munich.

This is mind, I do believe I’m qualified to make this statement: people in South Carolina are among the worst drivers in the known universe.

Never in my life have I seen more reckless, ignorant, obstinate, inconsiderate, and downright stupid drivers than here in SC. Tailgating is a sport here, although the popularity of NASCAR here has the local rustics thinking they’re drafting me. Dear me, here they are imagining they’re Greg Biffle or some such other overdone circle-driver, and if I have to hit my brakes hard they’ll be eating 13 tons of bumper. Remember, kiddies, if you can’t see my mirrors, I can’t see you.

Passing on the right is popular here, too, as well as passing 6 cars in a row on a 2-lane backroad in a no-passing zone before forcing themselves back into the traffic flow to narrowly avoid a head-on collision. And then the asshole will apply his brakes. Why? This makes no sense. Why pass me and then slow down? Again, I blame NASCAR. I may be slow but I’m ahead of you, so I must be going faster than you…

The other thing that people here do that frikkin’ stupefies me is when you’re cruising along at terminal velocity and some desperately stupid cretin pulls out in front of you going 20 below the speed limit instead of waiting for you to go by before pulling out. Hell, there could be 2 miles of empty road behind you, and rather than wait, they pull out. NEWS FLASH: a 13-ton truck going 60 mph does not gracefully stop on a dime like a German sports car. Granted, those air brakes work great, but be realistic.

Many a time I’ve had a nimrod do this and then have the audacity to shoot me a shitty look because I came up to within a few feet of their ass end, close enough to read their “My kid is a mediocre underachiever at Bubba Dillweed Middle School” bumper sticker. The infuriating topper to this episode is that 90% of the time, this waste of oxygen is gonna pull out in front of you doing 30, and then go about 200 yards before turning off the road again. Yes, you read that right. They couldn’t wait til the truck goes past, and the next 2 miles of road is empty, to creep that 1982 Dodge Diplomat out onto the road for a 300-foot excursion to the next driveway. 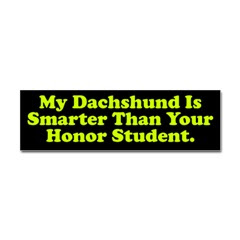 I’ve seen imbeciles of all ages guilty of this heinous act, but the main perpetrators are Blue Hairs, folks that were driving Miss Daisy in a Model-A Ford to the Scuffleville General Store when gas was a nickel. Nothing like a 300-year old driver with a handicap tag and glasses so thick they say “Five Cent Deposit” on the rim to make that big blue vein in my forehead twitch like an epileptic on crack.
Nothing at all, unless it’s a frikkin’ Moped… 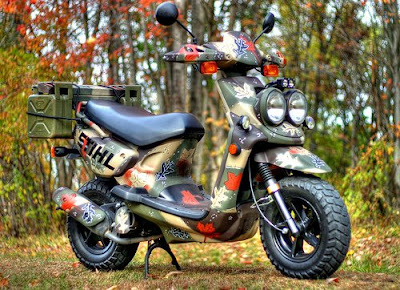 Never in my days have I seen so many people on Mopeds & scooters as I do here in SC. I could see if the underlying reason was Manhattan commuter traffic snarls, or if it was to save gas by getting 17 million miles to the gallon, but face it: the truth of it is that 99% of these Ped-Heads lost their licenses on a multiple DUI conviction and can’t get an SR-22 insurance waiver thingie. So they’re stuck doing 25 mph on a rolling chainsaw carting their purchase of a 22-ounce Steel Reserve and box of White Owls in a stolen milk crate bungee-corded to the back fender. For every scooter being jockeyed by a clown wearing leather and an airbrushed helmet like he’s on his way to Daytona, you’ll find 11 motorists behind him grinding their molars to dust and screaming like Gunny Hartman in Full Metal Jacket. 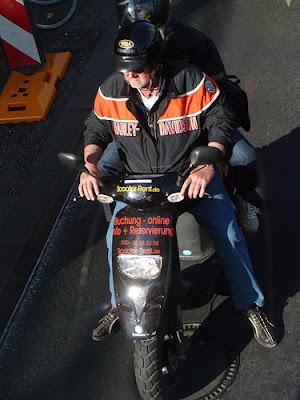 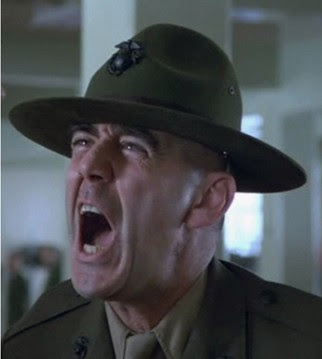 And before I go, I have a question for all you Playa Pimps out there driving a 200 dollar Hooptie with 5000 dollar 26” spinners and a 10,000 dollar subwoofer system: How the bloody hell can you drive that thing while pretty much laying down and trying to peer out through a foggy haze of dope smoke and windows so black they absorb light? Enquiring minds wanna know.
Posted by Steve: The Lightning Man at 3/21/2006 12:20:00 PM No comments: