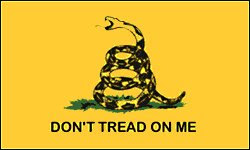 This past Thursday I got a chance to take a break from the chaos & upheaval in my life to attend the Patriot Rally put on by the Charleston Tea Party. Considering how stressed out I have been as of late with work, this was a sorely needed break.

I don’t get to attend very many events like this, mostly because I live an hour away from Charleston and I generally work exceedingly stupid hours. In fact, the only other real function I’ve attended was a protest against Nancy Pelosi when she visited Charleston on a fundraising trip. There was only about 30 of us there that day and it was a very mellow, subdued affair.

This time, however, it was to be a full-blown event with guest speakers and a bigger expected turnout. I arrived early, hoping to mingle and make some new contacts. A quick look at the gathering crowd showed I was among My Kind Of People, evidenced by the booth selling all manners of bright yellow Gadsden Flag items; in fact I received a free Gadsden bumper sticker as I came through the gates. I chatted awhile with Stu Morris and Kelly Golden from WSC 94.3 radio and was introduced to Joseph Kurt, who does the weekly podcast for the Charleston Tea Party and was recording citizens’ messages to Congress at their Soundoff Booth. Within minutes we were quick friends. 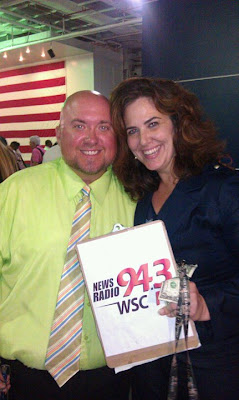 Me and Kelly Golden from WSC 94.3FM

The sky was getting pretty dark & menacing so we received word that the festivities would be moving onto the USS Yorktown, up on the hangar deck. The race was now on to pack up all their gear and move it 250 yards up onto the ship, and we caught the first drops of rain about 50 yards out. It soon became a deluge the likes of which words like “monsoon” apply. However, folks were not to be deterred. A good 500 people filed on into the aft hangar deck area, and then the real fun began.
If there was a theme to the rally, it was “It’s not about taxes anymore”. Instead, the rally was all about Fiscal Responsibility, Limited Government, Rule of Law, Personal Responsibility, National Sovereignty and State Sovereignty; ie: taking back this country one conservative value at a time. In true patriotic form, we sang the National Anthem, we recited the Pledge of Allegiance, and we even ran through Irving Berlin’s “God Bless America”.

The guest speakers were all excellent. It was great to hear proud Americans who could fire me up. First District Congressman Tim Scott came down off the dais and spoke from the floor. Retired Marine Corps Major General James E. Livingston, a recipient of the Medal of Honor, was inspirational. Another retired General, South Carolina’s State superintendent of Education Mick Zais, gave a great speech. We were also treated to New Gingrich, former Speaker of the House, who said of America’s current foreign policy, “We need one…”. 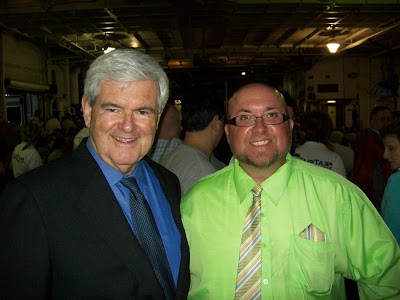 Me and former Speaker of the House Newt Gingrich 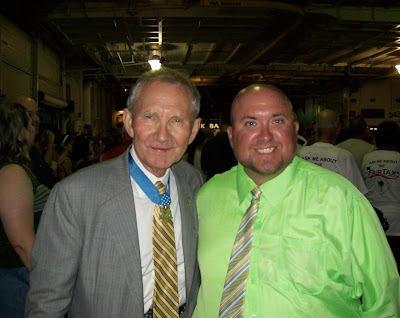 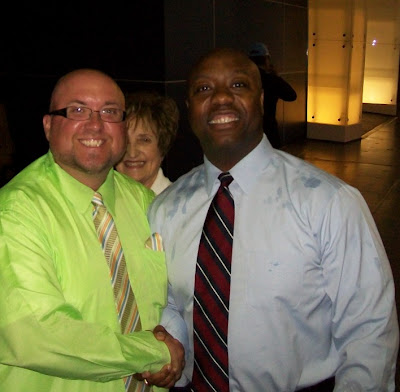 Me and Congressman Tim Scott (R-SC)

All too soon it was over. The only thing I didn’t get to do was give my own prepared statement for the sound-off booth. I was too busy absorbing everything to do it before we wrapped it up. I’ll include my notes, however, so ya’ll can see what I’d written:

I turn 42 next month, so I grew up in the 70s and 80s. While I spent my childhood waiting in gas lines on Odd & Even days during the Carter Years I was was really too young to understand just how inept ole’ Jimmy Earl was. I spent my carefree teen years under Reagan and life was good; I just never realized till much later in life how good we had it. I kinda took for granted things like low unemployment, a strong military, a thriving economy, international respect, and a belief in American exceptionalism.
I joined the Army fresh out of high school, and witnessed the fall of Communism first-hand with a ringside seat in Germany. We prevailed and The Red Boogeyman was vanquished. I went to college and dropped out after two years of spending my hard-earned money to learn almost nothing while surrounded by former hippies and foreign students on free scholarships taking their engineering degrees back to their own countries to compete against us.And somewhere along the way as my 20s became my 30s, the wheels fell off and the train derailed. Someone please tell me, where the hell is the country I grew up in?

We’re so broke that we now put the POOR in Standard & Poore and Uncle Sam’s credit rating is to the point now where he needs the Chinese to co-sign a loan from Gubmint Motors for a subsidized Chevy Volt. What used to be a Shining Light from the City on the Hill is now a Curly Fry Light Bulb full of mercury that will allegedly save the planet, unless it breaks and kills us all.

Illegal aliens qualify for in-state tution. 99 months of Unemployment checks are seen as a way to boost the economy and the unemployed are being handed superhero capes. Freeze Tag and Kick Ball are soon to be outlawed. The Left wants background checks on all gun sales and but doesn’t want anyone to verify voter IDs. They think we’ll never be out of money so long as the printing presses still have ink and even then all we have to do is forcibly take it from the rich.

Teacher Unions are backing convicted cop killer Mummia Abu Jimal and Liberals have nothing better to do than attack a one year old with Down Syndrome because they dislike his mother. While being bankrolled by George Soros, our so-called leader has a brother who lives in a hut and an aunt who’s an illegal alien living on welfare , but keeps his birth records and college transcripts locked up tighter than nuclear launch codes.