I recently found out something disturbing, something that I probably already knew in the back of my noggin, but never really registered. It turns out that the third largest oil-producing country in the world, after Saudi Arabia & Russia, is the good old U-S-of- A.

That’s right, it’s us… Yet we import kajillions of barrels of oil a day at outrageous prices from hostile countries like Venezuela, a country on the verge of communism and who’s president is so buddy-buddy with Castro they give each other reach-arounds with their after-dinner cigars, and from Arab countries who do their level best every day to kill us all. So why do we import so much from angry brown people who all hate us with a venomous passion?

The knee-jerk reaction is to say, hey Steve, it’s because of our dependence on fossil fuels for all our cars & planes & pleasure boats and our carefree lazy lifestyle of leisure and war-mongering. Sure, most of that is valid. The Department of Defense uses an awful lot of POL (Petroleum/Oil/Lubricants) to continue killing terrorist scumbags, and I’ll gladly pay a couple extra cents at the pump to make sure our troops have what they need to fulfill the missions our geniuses in power set before them. And yeah, when I see some douche pulling his McYacht with his Hummer to his beach house, I wonder how many feet to the gallon he gets. But the real problem is a tad more basic & a lot more sinister, friends. It’s pure corporate greed.

See, America’s dependence on fossil fuels is a direct result of us being held hostage by the internal combustion engine. And who, pray tell, is holding us hostage with it? Why, Corporate America, of course! You think the oil companies, with bullshit contrived shortages from Katrina-bashed refineries and busted pipelines, and who already won’t part with their record profits to build any new refineries, want to see their choke-hold on the nation released by all of us switching to alternative fuels? Puh-leeeze.

Also at fault? The automobile industry, which is so far in bed with the oil companies that they don’t even mind the morning breath anymore. These hybrid cars and tiny forays into electric cars are just window-dressing, if you ask me. It makes it look like they’re doing something without really doing all that much. I keep hearing conflicting reports on whether they even get all that great mileage or even really save much money. Back in the late 90’s, GM leased, not sold, their EV-1 electric spaceship mobile for about a year or so, and only in Arizona & SoCal, with no real fanfare or publicity, or even any real support after a few months. Honda’s Insight hybrid insect has done a little better on publicity and sales were a little better. I’ve even actually seen 3 or 4 of them on the road. And now everyone is putting out a hybrid model because it’s trendy.

But you mean to tell me that a country that made the atom bomb (using German scientists), put man on the moon (using German scientists), and made invisible stealth bombers (using German designs), can’t get a car company, even one that’s half German, to really go full out with efficient, inexpensive, mass-produced alternative-fuel vehicles to break the cycle of gas consumption? It’s been tried before, by another enterprising German, Rudolf Diesel. His original design allowed the engine to run on vegetable oils and seed oils, even hemp oil! The idea is now called bio-diesel. But the big business interests of the day like Dupont, Hearst, and coal companies smeared diesels and basically forced the engine to use POL-based fuel sources. Today’s diesel fuel is one step removed from home heating oil. Every time someone says hey, we can run on corn, ethanol, peanut oil, sunshine, or fucking hamster power, some CEO says oh HELL no, I’m not gonna put money into THAT. It might cut my profits or hurt my salary. Instead, let’s get together with our oil masters to keep America hooked on giant SUV’s (Stupid Useless Vehicles) that cost 60 grand to buy and an arm & a leg to drive.

They screwed the Japanese too. Our Asian brothers pioneered small inexpensive fuel-friendly cars during the artificial shortages of the 70’s. And have you noticed that most all their SUV’s are full-time all-wheel drive instead of selectively 4WD? That way they’ll burn just as much juice as our big stupid SUV’s as soccer moms run to Wal-Mart for milk. Take that economical Toyota engine and kill its economy so it’ll run like a pig like a Ford Excavation or Chevy Subdivision. At least Toyota has continued to pursue small fuel-cheap rides, even though the Echo and Prius both looked like turtles fucking a football. They recently went larger with the Yaris, and Nissan just introduced the Versa. This week I’ve started seeing commercials for Chevy claiming that gas pumps hate their cars, and I just 5 minutes ago saw a Chevy commercial about flex-fuel cars. So maybe the auto industry is making another attempt to look good until they rankle their masters. If Big Oil gets too riled up, they’ll just jack it up to $3.50 a gallon again just to make us grateful to see the $2.54 I just paid this week. And prior to Katrina just 12 months ago, we were bitching about it being over $2.00. Hell, we’d sell our daughters to Ron Jeremy for 2 bucks a gallon again……
Posted by Steve: The Lightning Man at 9/10/2006 03:04:00 PM No comments: 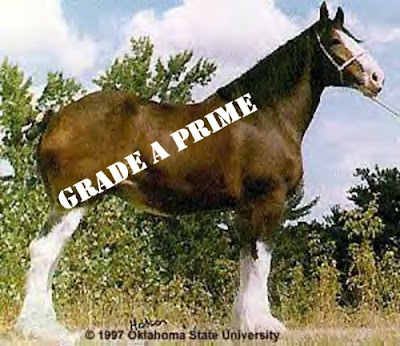 To paraphrase an old movie title, they eat horses don’t they?

I read a bothersome A.P. bit in the newspaper a couple days ago. It seems that the US House of Representatives voted to ban the slaughter of horses for meat. The article, by Libby Quaid, was full of interestingly irksome information.

Most bothersome is that how, with oil prices through the roof, brave young Americans getting killed daily by third world jihadists, and Iran waving the nuclear flag around, Congress has found the time to debate the merits of horses as the other other other white meat.

The article stated that, “Opponents of the practice showed pictures of horses with lacerated & bloodied faces, the result of being crammed into trailers”. Y’know, kids, the same things happen to cows and pigs when they go to slaughter, but no one’s mentioning that little tidbit. Anyways, we’re carting you off to be ground into burgers, but you might have gotten a cut on the way? Sure, makes sense.

Representative John Sweeney, a New York Republican, argued that the slaughter of horses is different from that of cattle and chickens because horses are American icons. I beg to differ, Congressman. The bald eagle is an American icon. The horse is an American load-bearing beast of burden and occasional afternoon payoff at Churchill Downs. The closest thing horses get to being American icons is that they hauled around white Europeans as they killed off native tribal nations and stole their lands, but I digress.

No, our core values and morals don’t want us to kill horses because they’re pretty. America loves pretty things. If horses weren’t so cute, we’d eat them with special sauce, lettuce, cheese, pickles, & onion, on a sesame seed bun, super-sized with fries & a Coke. Instead, the less attractive animals like cows, pigs, and chickens, get consumed by the megaton, and no one says Boo. Actor/comedian Denis Leary, who by his own words represents angry, gun-toting, meat-eating people, said it best when he said “We only want to save the cute animals, folks”.

This might explain why the same newspaper had a mention of the Phoenix, Arizona police arresting a scumbag serial rapist buried on page 12, while the front page had the DUI arrest of notorious waste of skin Paris Hilton on the front page. If anyone could use a double horseburger with cheese, it’s that wretched excuse of a human being. That’s hot…
Posted by Steve: The Lightning Man at 9/10/2006 01:04:00 PM No comments: