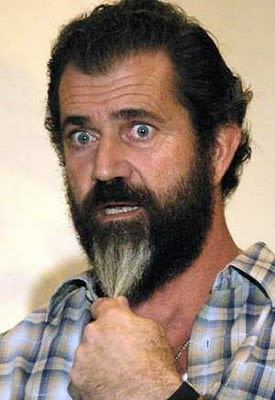 Surround yourself with good people.... 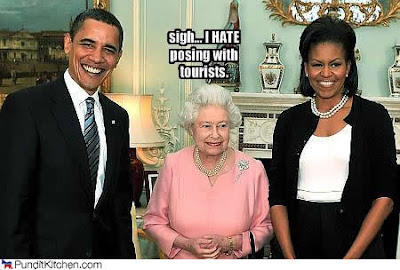 Last April, after The Obamessiah and Madame Boob Belt broke protocol to hug Queen Elizabeth II of England and slip Her Majesty the lovely gift of an iPod loaded down with complete & utter crap, Obama found himself asking the queen a question about leadership.

"Your Majesty, let me be clear. How do you do it? How have you managed to be such an effective ruler for so long?"

"Oh, Barry, it's really quite simple. You must surround yourself with good people. Here, let me show you."

The Queen pressed a button on her desk, and within seconds Prime Minister Gordon Brown appeared. "Yes, Majesty?"

"Gordon, if your parents produce a child, and that child is neither your brother nor your sister, then whom would that child be?"

Brown looked deep in thought for a few seconds, and then replied "The child would be me, Majesty."

Obama was amazed. This was incredible! Taking his newly found wisdom back to DC on Air Force One and pondering it over Wagyu beef and champagne, he formulated his next move.

The next day at the Oval Orifice, The One summoned Joe Biden.

"Joe, I need to know if you've been acting stupidly. Tell me, if your Momma and your Daddy have a baby, and it's not your brother or your sister, then who is it?"

Biden looked perplexed, almost constipated. "Gee, Boss, give me a few minutes to think about it."

Biden then went to his favorite place to think; the second-floor men's room in the Old Executive Office Building. Nestling into the far stall, he looked at the floor and saw a familiar pair of shoes in the next stall.

It was Dick Cheney, who'd come to visit an old friend in the OEOB.

Biden could hardly contain himself and ran full tilt back to his master, who was Windexing his TelePrompters and practicing his purse-lipped angry look.

"Excellent, Joe. Please, in the name of Hope & Change, tell me."

Obama was thunderstruck. His second-in-command had failed him. Slapping his head in exasperation, he turned to face Biden.

"No, you dumbass; it's Gordon Brown!" 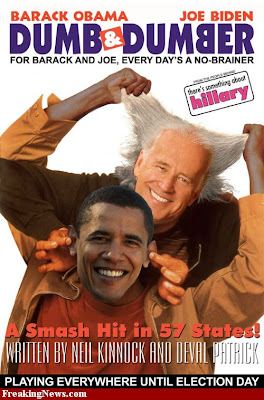 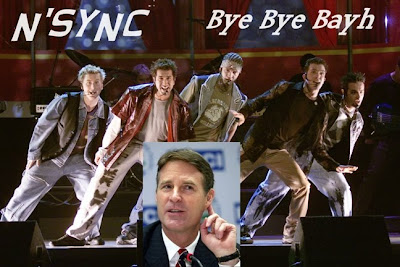 A couple weeks back I brought you my epic post comparing the Obamessiah's Reign to the struggle to win World War 2. Missed it? For shame!

Go here and bask in my genius. And then giggle at Admiral Rahmimoto.

And the hits just keep coming.

I foresaw the mass defections, career suicides, and surrenders coming, and it seems I was right.

Rhode Island's Patrick Kennedy says the same, meaning for the first time since the early Cretaceous Period, there won't be a Kennedy in office. Dead Kennedys the world over are spinning in their collective graves like a room full of whirling dervishes. 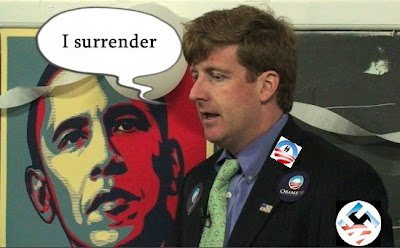 Ben Nelson of Nebraska is tanking over his Cornhusker Kickback healthcare vote.

Mary Landrieu of Louisiana is tanking over what amounts to a 300-million-dollar bribe. 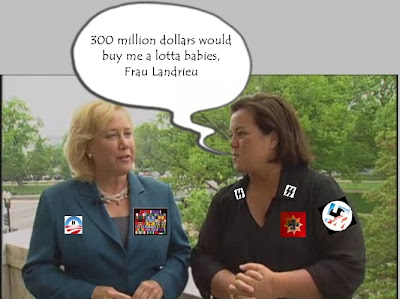 The partial-termers filling in for Herr Obama and Herr Biden, Roland Burris and Ted Kaufman, will be out the door.

Governor Bill Ritter of Colorado is hanging it up.

The battle lines are drawn & redrawn. Our victory is within reach. Fight on!!!! 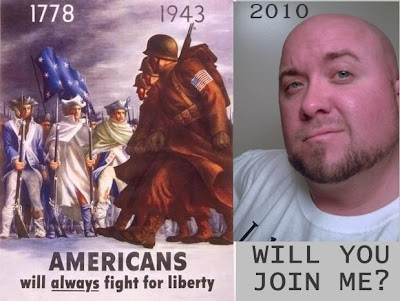 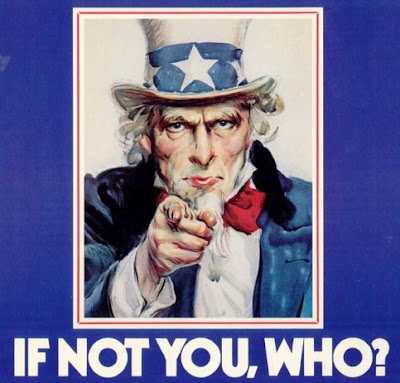 It is with no small measure of gratitude and glee that I get to say my blog has enlisted it's 100th follower today! 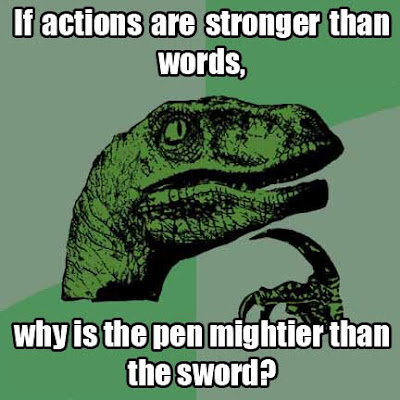 Thanks, all of you, for putting up with my antics, my rants, my chicanery, but most of all thanks for sticking with me, believing in me, and supporting me. 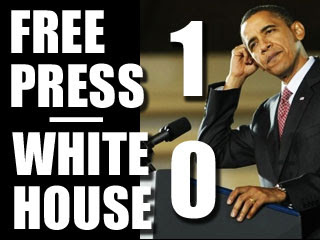 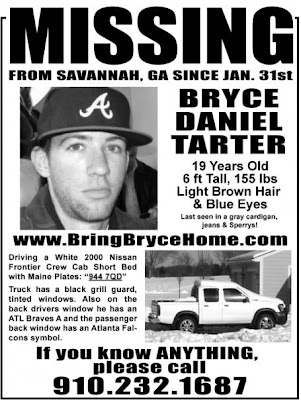 I want to bring something serious to your attention in hopes that you guys out there can lend a hand, and some eyes & ears too.

I received word from one of my high school classmates that a young man who graduated from my alma mater in Maine is missing from the Savannah, Georgia area.

Please keep an eye out for this young man so we can find him & bring him home to his family. Go to www.bringbrycehome.com for more pictures and information.
Posted by Steve: The Lightning Man at 2/12/2010 03:26:00 PM 4 comments: 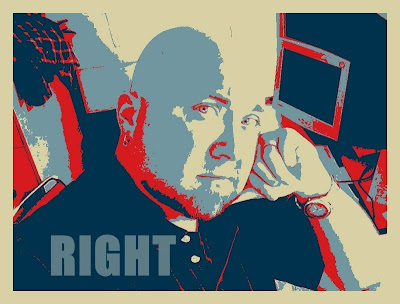 Special thanks to my Facebook buddy Steve B for doing this for me.... 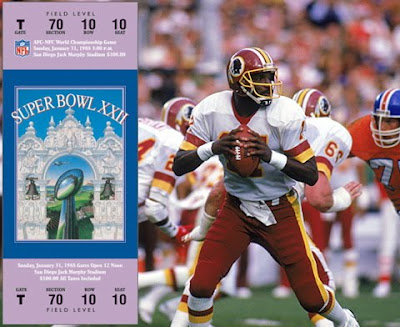 I'm not really that big a football fan. The sporting highlight of my Sunday today was watching Alex Ovechkin get a hat trick as the Washington Capitals beat the Pittsburgh Penguins in overtime this afternoon to extend their winning streak to 14 games.

Of course, I'll have the game on tonight, but really just to watch the commercials.

I do, however, have a couple of fun Super Bowl memories from years gone by.

When I left for basic training at Fort McClellan, Alabama in January 1988, the Washington Redskins were headed to the Super Bowl. As it happened my senior drill sergeant was from Maryland, and was a 'Skins fan in those days before there was ever a Baltimore Ravens. It also happened that he had duty the night of the game. That meant that he'd be the sole drill sergeant there at the company overnight.

The drill sergeants generally were a little easier on us on Sundays, and since he was in a charitable mood to begin with, he rolled the TV outside on a cart and we all sat outside on the cold concrete of the company formation area to watch the game. His mood was further enhanced by a 42-10 victory by Washington. It was cold and uncomfortable out there, but we got to watch the game despite being in basic training.

Further evidence that the Super Bowl is bigger than sliced bread, had the Soviet Union ever wanted to truly invade western Europe, all they needed to do was wait for Super Bowl Sunday. In Germany, it was customary for the Commanding General of USAREUR (US Army Europe) to declare a "training holiday" for the day after the Super Bowl. That way the troops could stay up all night for the game and sleep it off a bit, not having to come in to work till 12 noon Monday.

So we took advantage, going over to my assistant squad leader's house to watch the festivities. Joe Clipp lived off base in the village of Eislingen, and he had German cable TV. That meant that we'd have a crystal clear picture, but the commentary would be in German....where we lived, the TV feed from Armed Forces Network was fuzzy so it was preferable to watch the German feed. We put the radio on AFN's FM feed and listened to the American commentators instead.

Being six hours ahead, the kickoff was at midnight our time and the game lasted till 4AM. That gave us 8 hours to sleep it off and show up for a 4-hour workday. Nearly a million troops in Europe at that time, and 99% of us were half in the bag watching a football game.

What Reagan should have said was "Mister Gorbachev, tear down this wall, but wait till after the game" 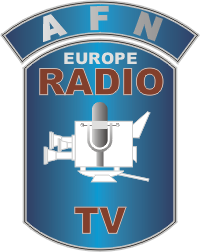 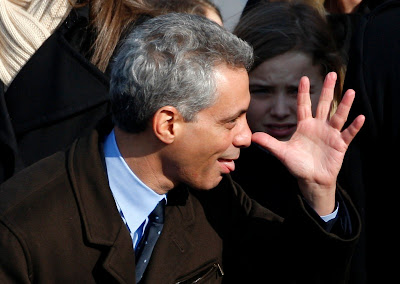 Ya' know, guys, it's fun being right!

As you'll recall from the post I did about how fighting this administration is like fighting WW2, I mentioned that it'd be a nice bonus if something were to happen to disgrace someone like Reid or Pelosi or someone else in that camp....and then Rahm Emanuel goes & steps in a pile of shit with both feet.

So in honor of this controversy surrounding the White House Chief of Staff, I shall liken it to the daring raid that shot down Japanese admiral Isoroku Yamamoto. 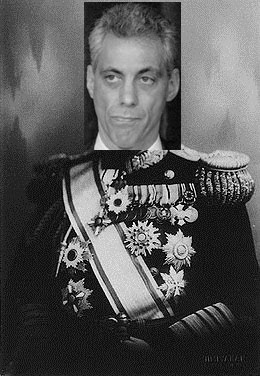 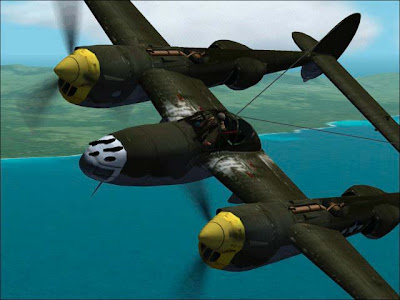