It's gotta be the gun's fault. 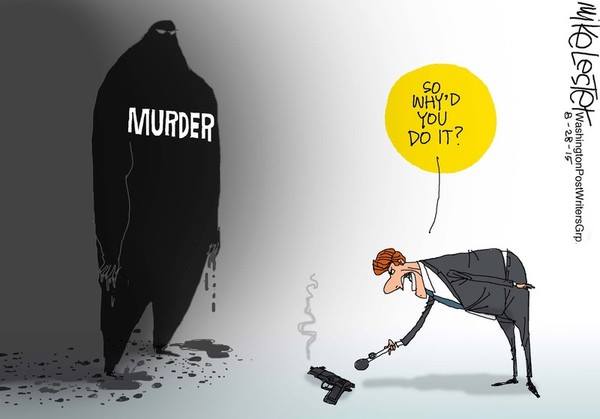 Unless you’ve been living under a rock this week, then you of course know what happened on live TV Wednesday morning at about 6:45am. A 24-year old news reporter and her 27-year old cameraman were shot and killed, and the woman they were interviewing for a puff piece for the Chamber of Commerce was wounded, shot in the back trying to flee. She is recovering following surgery.

The shooter was a former co-worker of theirs, let go from the southern Virginia TV station a while back for being a general pain in the ass. Difficult to work with and easy to anger, with a huge chip on his shoulder and a persecution complex about being a gay black man, they say he had problems working with several coworkers. He was finally fired and had to be escorted off the premises by the police afterwards when he took it poorly.

Seemingly the time since his firing was spent seething with rage, blaming his former coworkers, and planning this murder. He didn’t just shoot former co-workers at the station; there might have been security there. No, he planned an ambush at a remote story location where there would be no one around but the victims. He wanted the act to be horrifying and notorious, on live television. The husband of the lady being interviewed was watching TV at home. The fiancée of one of the victims was at the studio watching it happen live. This dickbag even attached a GoPro camera to himself to make sure there was a shooter’s POV footage. Once the victims were on the ground, he executed them with shots to the head. No, this wasn’t a heat of the moment crime of opportunity. This was a premeditated execution.

After the killing, he then faxed over a lengthy manifesto to ABC News and started driving his rented Chevy Sonic, long known as the high-speed getaway vehicle of choice for crazed gunmen, towards the DC area. Ironically, while driving north he was passing the scores of media vehicles headed south to the scene of his crime. 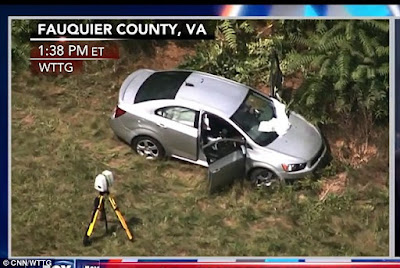 Eventually he was spotted and a short chase ensued, and he did what nutless cravens generally do when cornered: shot himself in the head. He died at the hospital at about 1:30 that afternoon. Good riddance. He at least saved the taxpayers the cost of a trial and his maintenance and upkeep in prison.
His manifesto cited that he felt discriminated against as a gay black man, and he even had the stones to blame the recent shooting at the church here in Charleston as his tipping point. Oy vey.

And of course, this has to be politicized. The shells hadn’t finished hitting the ground yet when the Left started screaming for more gun control, because that’s their answer to everything. More laws. More legislation. More stripping of liberty from law-abiding gun owners who will never commit a crime. 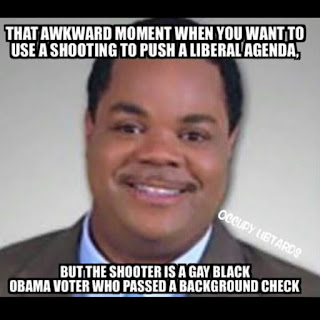 Someone has broken the law. Time for people to froth at the mouth about making new laws making illegal acts MORE illegal. Because breaking one or a dozen laws doesn't stop people from committing crimes, but adding that one more law into the equation will. Because we must be seen to be doing SOMETHING, don’t we? Regardless of whether it accomplishes anything or solves the problem, at least we did something.

Ah, yes. Employee is a pain in the ass, gets fired, gets escorted off premises by cops, comes back and kills former coworkers and then sends manifesto to the network blaming the Charleston shooting as his trigger. I knew that this shit would somehow be blamed on the Confederate Flag. And of course, ban guns too, because well, more laws...

White guy shoots black guy, especially if black guy robbed a store and assaulted a cop, and it's all racism and Black Lives Matter. Don't bake a cake for a gay couple and it's a hate crime and they sue you out of business. Don't pay for abortions for your employees and they try to shut your company down. Gay black dude films himself on a GoPro killing his former white coworkers on live TV, and it’s MORE GUN CONTROL!!!!!! My god, but you liberals are stupid children.

The NYPD said it stepped up its presence around TV stations on Wednesday in New York as a precaution, because a guy shooting former coworkers in rural southern Virginia automatically meant the NYC news people were next.

"Out of an abundance of caution the NYPD's Counterterrorism Bureau, Critical Response Vehicles and Hercules Teams have been deployed to television news outlets in New York City," said Deputy Commissioner for Counterterrorism and Intelligence John J. Miller. "This was ordered following the shooting this morning in Virginia. While there is no indication of any threat to media outlets beyond this incident, we have provided an additional layer of security until we have a fuller understanding of the motive behind the Virginia incident." 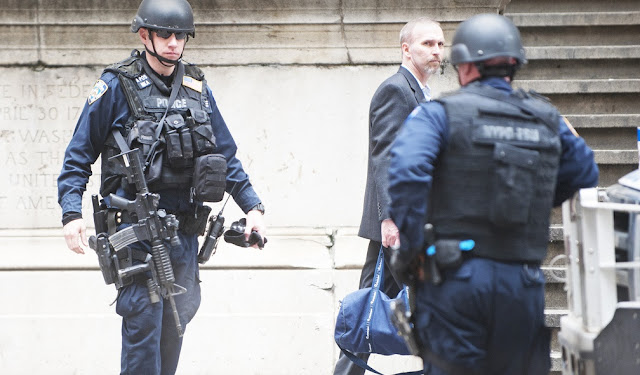 Because, again, they have to be seen to be doing something. They have to justify their budgets and expenditures, so deploying SWAT Teams to all the media outlets gets them boo-coo face time on TV, ingratiates themselves to the media as their Loyal Protectors, and makes the public forget unpleasant stuff the recent Worcester, Massachusetts SWAT team screwup where they raided the wrong house and held an innocent family at gunpoint.

Yes, the masses must be appeased and it must appear that something is being done. Politicians must call for laws because it looks like they are doing something. Police departments will deploy expensive highly trained units to do absolutely nothing because it looked like they did something.
Look, this guy was nuts. As in crazy, effed-up, bonkers…. He wasn’t just pissed off, he was insane. We don’t have a gun control problem here in America. We have a mental health problem. But it’s more important to politicize this event and use it to further the liberal agenda of gun control. 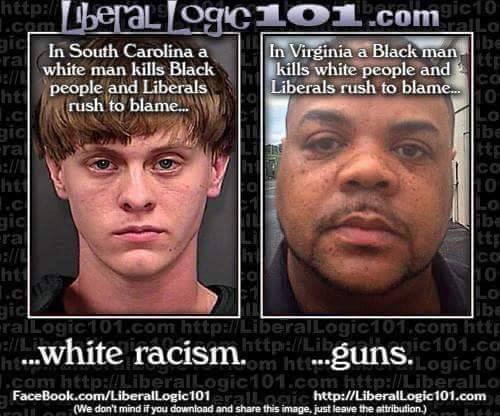 An insane white guy with a racist agenda and an attachment to a flag kills people and it gets blamed on racism and the flag gets banned and history gets erased, because it fit the liberal agenda. But oh noes! A gay black man? We can’t ban the Rainbow Flag! And it can’t be racially motivated because only white people are racist!!! BLAME THE GUN!!!! THE GUN DID IT!!!! Because that fits the narrative of the liberal agenda.

Back in May, a black man shot a white deputy in the head without provocation at a gas station in Moncks Corner, SC, and was later killed in a standoff with police. No one made the rounds of the media calling it racist or racially motivated. Last night a black man executed a Houston-area deputy at a gas station without provocation. No one is rioting or calling it racist. Is it because the men who were shot were cops, and white, and the shooters were black? C’mon, liberal-controlled media, where’s the outrage? 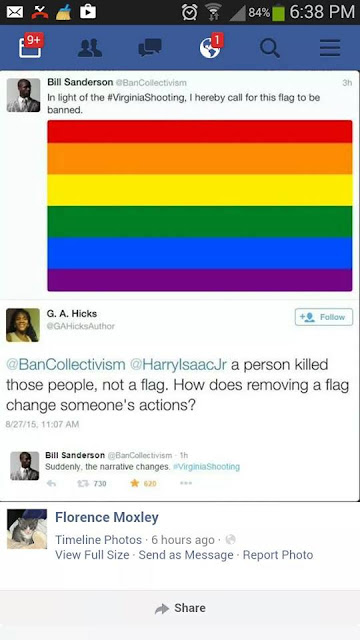 Where’s the outrage in Chicago where black-on-black violence is so common that it doesn’t even make national news anymore? To whit: This year’s July 4th weekend saw 9 dead and 53 wounded. The weekend of July 24th -27th saw 7 killed and 28 wounded and the weekend before that had 4 killed and 29 wounded. Last weekend it was 6 dead and 35 wounded. But you don’t hear these numbers on the nightly national news. The dried up old yentas aren’t discussing it on The View. How about that guy who replaced Jon Stewart on The Daily Show, as it was the News Source Of Choice for Low Information Liberal Gen Y types? Is Bill Maher talking about it when not slagging everything Conservative? John Oliver, funny though he may be and as influential as he is becoming in his commentaries, will most assuredly talk shit about every single Republican candidate for 2016 before ever whispering a Chicago crime stat. The stats are out there, but you have to go find them. The Left ain’t gonna interrupt their narratives to speak the truth.

Instead, they just say simple things like “Take the guns”, and the idiot sheeple out there eat it up. Next thing you know, you have an unarmed populace who can’t fight back against tyranny when the government decides it wants to take more of your rights, and in the meanwhile you’ll also have an unarmed populace that followed the laws and the criminals will still have their guns and will prey upon them with impunity.

Not on my watch, pal. 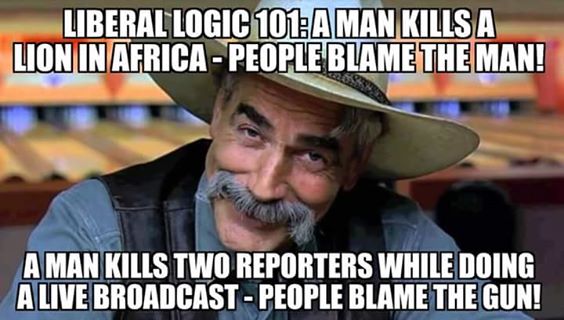