Columbus Day? What a farce...

So, this week we celebrate another supposed “holiday” in America. Another Columbus Day has come & gone and what do we have to show for it? The usual crap associated with any other contrived special occasion…banks were closed, post offices were closed, too. Most kids had the day off, after they “learned” a watered-down and sugar-coated version of how this great brave glorious explorer discovered America. The malls and car dealers will hold mock sales where they supposedly slash their over-inflated prices so that you don’t actually save anything and instead are left with the false perception that you got a great deal.

So let’s call a spade a spade, shall we? What exactly did Columbus do? I’ll tell you: HE GOT LOST. We’re honoring a guy who got lost. We’re celebrating a holiday that’s all about a broke-ass Italian who got run out of Genoa for lack of financial backers, conned the Queen of Spain into pawning her own jewels to buy 3 raggedy-assed sailboats, and set off to find a shortcut to India.

After several weeks the ships are falling apart, mutiny is in the air, and Columbus is pretty close to getting fed to the crabs. However…LAND HO! He discovers land and calls the locals INDIANS. What balls. Dude, those natives aren’t Indians. We still erringly call the natives of America Indians, and that’s utter bollocks. At least the Canadians call their natives First Nation Peoples. Very few Americans ever call our own tribal nations “Native Americans”. We just call them Indians, and only think about them when we need to go to a casino & Vegas is too far away. Once proud & vibrant cultures, reduced to penny slots and blackjack. God Bless America, but I digress….

Back to Columbus: Did he actually discover anything? No. Here’s a clue—If there’s already people there, then there’s a realllly fucking good chance that you didn’t discover it. But I guess the mind-set is that unless a white European doesn’t discover it, then it never existed, right? All these “explorers” discovered was that Hey, there’s an assload of other cultures we can rape, pillage, exploit, and forcibly convert to Christianity before we kill or enslave the ones who survive our diseases & plagues.

The Incas, Aztecs, Mayans, Toltecs, Sioux, Iroquois, Navajo, Cherokee, Australian Aborigines, and dozens of others…all great civilizations already in place but “discovered” by broke white Eurotrash and subsequently killed off for profit and religious zealotry. I bet your kids won’t learn THAT in class this week, will they?
Posted by Steve: The Lightning Man at 10/10/2006 02:35:00 PM 1 comment:

Soundtrack To My Life 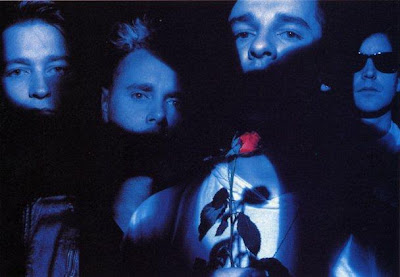 It’s no secret to anyone who’s known me for more than 17 seconds that music is one of my absolute true loves. I can associate so many songs with pivotal moments in my life, and for so many songs I can tell you exactly where I was & even in some cases what I was wearing when I first heard it.

Truth be told, I agonized over this list. Some of the songs came easily, the first 8 or 9. Then I started to think of more songs that were important to me. I wanted a list of 10 songs, then it became 20, 25, and then I thought 37 songs, one for each year of my life…I ended up with a list over 50 songs long.

So, here’s a list of my defining tunes; a soundtrack to my life, per se, if you will.

1.Enjoy The Silence- Depeche Mode
It’s an obvious choice. My most favorite song ever. I never get sick of it. It’s the one song in the known universe that my friends can hear & instantly think of me. If ever I had a signature song, this is it. It brings back so many great memories, in addition to being a great track.

And the rest of the songs are in no particular order. Not all the songs will receive lengthy comments.