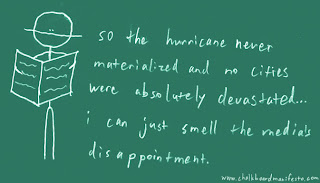 I never saw more than a 15-minute sprinkle all day. Panicked people closed schools, closed businesses, activated every emergency operations plan in the book, and basically made like the end of the known universe was nigh.....and the newsies on TV are STILL milking this fucking thing and preying upon people's fears. Sure, downtown Charleston got a lotta rain today (35 miles east of me) but not any more rain than during a summer deluge t-storm. But these dillweeds are standing around telling us that it could still get worse....winds could still pick up....rain could still drown us all....shelters are open (but no one's in them)....power crews are ready.....the National Guard is on standby, 300 highway patrol troopers are on standby......stay tuned to Accu-Weather Live Eye Storm Team Disaster Watch Operation Urgent Panic Precipitation Response Team for all your drizzle details.

It's a slow news day...we tracked this thing for a week, so we gotta milk it by reporting NOTHING but storm-related drivel. And once the news hour is up ...wait, scratch that....the news starts at 4 now, then goes to 5, then 5:30, then 6, and repeats again at 7....the earliest coverage and the latest coverage, and if we don't have the news on, there'll be a crawler repeating the same shit over & over again. But wait; let's see the same animated tracking footage of the cloud system that we showed you ten minutes ago, along with 8 different scenario situations for projected tracks and possible floodings and the decimation of all humanity.

Every time a black cloud gets spotted offshore, the local newsies all join forces to make sure everyone panics as soon as possible, and stays afraid. Fear keeps us pliant, and we’ll be too scared to change the channel. They act like at noon tomorrow, Nostradamus and Rasputin will rise from the grave to lead the 4 horsemen of the apocalypse down Meeting Street. 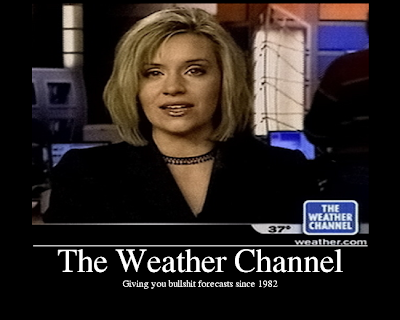 So let's get rid of the butterflies. Damn things never do anything but flap their wings and cause hurricanes anyway...