More of the Entremanurial Spirit 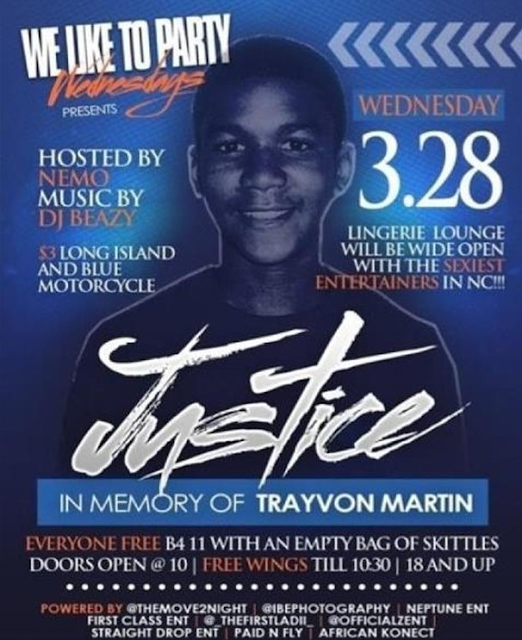 As you may recall, I used the term "entremanure"a long time ago here at Global-D to describe people making money via what I consider bullshit means. I also used it a couple days ago when talking about the people making money on the back of the Trayvon Martin case in Florida, namely those making all the bootleg tee shirts & hoodies...


Well, kids, this one took the cake for me when I spotted it. I'm sure you'll agree. Granted, it's a month old now but sometimes I'm a bit slow...I have a day job.

This ad circulated on Facebook for Bentley's Lingerie Lounge in Greensboro, NC. How trashy is it to use the name & likeness of a dead teenager in Florida to fill your night club in North Carolina? Sure, you probably thought you were honoring his memory by crassly offering free admission before 11PM with an empty bag of Skittles and free wings till 10:30. I'm sure the under-aged Trayvon would be pleased to know the club has the sexiest entertainers in NC and that you could get a Blue Motorcycle or Long Island Iced Tea for just 3 bucks in his memory.

The owner of the club claimed no knowledge of the promotion and canceled the event. Not exactly sound business acumen to allow an outside source to promote events at your club without your knowledge...just sayin'...

I think this tribute to young Mister Martin is much more touching, from students at C.H. Terrell Academy in Augusta, Georgia.
Posted by Steve: The Lightning Man at 4/29/2012 06:18:00 PM