A couple months ago I started a new "feature" here at Global Domination Through Applied Inactivity called Conversations With Liberals. This is where I highlight some of the foaming at the mouth I encounter in my daily interactions with the Liberals of the Species.

Today we continue the fun & excitement.

Just before the election she posts up a link from none other than, get this: SocialistWorker.org . Seriously. And then has THIS to say when quoting the article:

"...the electorate that's likely to turn out on Election Day will over-represent people who voted for John McCain and Republicans in 2008--and under-represent the majority who voted for Obama and the Democrats....A Project Vote study that compared self-identified Tea Party sympathizers with low-income, minority and female supporters of Barack Obama in 2008 found that two-thirds of Tea Partiers had incomes above the national median, and three-quarters reported being in good financial shape. By contrast, 60 percent of African Americans and nearly one-half of young voters had incomes below the national median."

It's all about money for these fucks (Rep). They don't give a rat's ass about us.

Hmmm.....if we didn't care, we'd just let the Democrats continue to run the economy down the shitter. Also, I love that they compared people who made less to people who made more to state the obvious, which was that certain people make more than others and we're all supposed to feel guilty about making more than other people, if indeed we do make more than others. I know an assload of Dems who make a LOT more than me. This report is like saying "A study that compared people with apples to people with oranges found that two-thirds of group A had more oranges than people who have fruit and that 60 percent of random group cluster B had apples below the national average of fruit posession."

And a few days ago, Woe had this to share:

"Just bought my new laptop for school! Yay me! Spread over 6 months for payment, I maybe can pull it off, as long as ReFUCKlicans don't take away my unemployment..."

Oh yes. As long as you get your entitlements we don't incur your venomous wrath and ire. As long as you can purchase a high-value item with your entitlements all is well in the world. Christ, go get a job at McDonald's. A girl I went to high school with managed a McDonald's in college for 6 years getting her BA and Master's before landing a regular job in her career field. Not too long ago, fast food places were giving away signing bonuses to get people to work there. Then again, that was during the Evil Bush Administration; such things may now be extinct in the Obama Utopia.

Another friend, Screaming Militant Liberal, posted up a link to an article over at Salon.com, another Leftist agenda-festival. The article, by Glenn Greenwald, crucified Representative Eric Cantor (R-VA), for going against the anti-Israel Obama Administration and meeting with Israeli Prime Minister Netanyahu to express his support for Israel despite the White House's less-than-friendly attitude towards a nation that most days is our only true ally in the Middle East.

Greenwald has the audacity to say, " Leave aside the absurdity of believing that Israel needs to be protected from the extremely deferential and devoted Obama administration." Are you serious? How about blowing Netanyahu off to go eat dinner? Or when Netanyahu canceled a trip to America a few months ago after Obama refused to meet with him? Yeah, that little snub got played up big time in the Muslim world, from Al-Jazeera to The Muslim Observer.

But Eric Cantor's a dirtbag for offering an olive branch.

Of course there was the expected litany of whining & sniveling after the election. The "teabagger" comments and the like were rampant & rife. Too many to even list.

Alvin Greene got 28% of the vote?!?! Damn, Jim DeMint must be a shitwagon of the highest calibre.

This prompted a couple of comments...

Elitist Liberal's Effete Friend: Unbelievable. If we had fielded a real candidate, we might have won.

Elitist Liberal: Hell, a guy who knew how he got nominated might have taken 40%. BTW: I'm a lazy fool who hasn't heard the new Eno yet. (Getting good reviews though.)

I loved how a whine & cheese fest couldn't last two sentences before self-absorbed boredom sets in and the conversation turned to the latest album from Brian Eno.

Democrats overwhelmingly selected Alvin Greene in the primary to run against DeMint with 59% of the vote, despite very limited campaigning and campaign spending, and having no website and no yard signs. It's not Jim DeMint's fault that the opposition selected a guy who couldn't find his ass with both hands and a roadmap. Jim didn't even schedule debates or campaign all that hard because every time Greene opened his suck-hole he dug himself a deeper hole. DeMint was instead left free to help others get elected. And Greene got 28% because even when faced with defeat, Democrats still felt that they had to vote "D" or be faced with scribbling in Mickey Mouse's name in the write-in block. Greene's great idea to stimulate the economy was to make action figures of himself:

"Another thing we can do for jobs is make toys of me, especially for the holidays. Little dolls. Me. Like maybe little action dolls. Me in an army uniform, air force uniform, and me in my suit. They can make toys of me and my vehicle, especially for the holidays and Christmas for the kids. That's something that would create jobs. So you see I think out of the box like that. It's not something a typical person would bring up. That's something that could happen, that makes sense. It's not a joke." 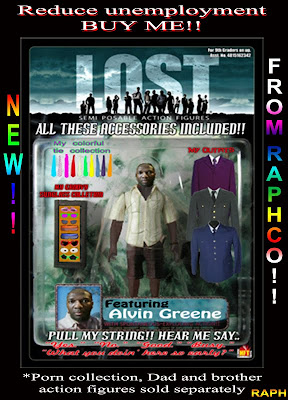 Happened upon an interesting conversation from Elite Liberal about how vile the new logo for The Gap is, and how lame the new website is for Urban Outfitters. Wow. I never even noticed nor even knew they had changed.....I don't shop at The Gap or Urban Outfitters because it's overpriced trendy rags for image-conscious snobs, none of whom seem to weigh more than the clothes they're wearing (plus the weight of the latte in their hands). This conversation also took place a MONTH after the Gap pulled the plug on their new logo after only a week. However, I did learn a couple new words: Fauxhemian (well-to-do posers conforming to a safe, upper middle class lifestyle but with the superficial pretense of an alternative or Bohemian lifestyle) and Trustafarian (Privileged white kids who subscribe to the hippie lifestyle (because they can) since they have no worries about money, a job etc. They can then devote their lives to eating organic, following Phish, and wearing dreadlocks (no need for job interviews). They tend to drive Toyota Landcruisers, shop at cooperative supermarkets, and smell of patchouli--common in northern California.) 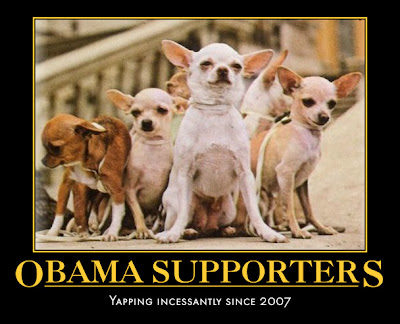 alvin must be unaware that most toys sold in AMERICA are built in china, so the only jobs created by making dolls of him WOULD BE IN CHINA.

guess he didn't get the recall notice a couple years back on all the lead painted toys from china, he's been putting in his mouth, fucking up his brain waves.

Yes, purchasing expensive things that you don't need while unemployed and sucking at the gov't teat, all the while blaming the GOP for a situation created by YOUR beloved Obama?!?