Assault PopTarts and other lunacy 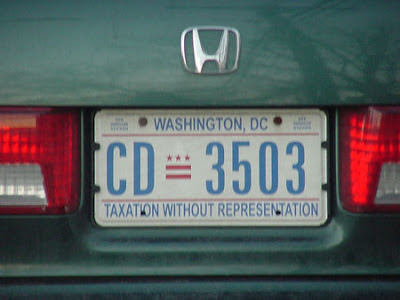 I was born in the nation's capital and spent my first 14 years in Maryland. I'm not proud of either. The District of Columbia is a cesspit of idiocy that celebrates the fact they are taxed without even having true Congressional representation. They have no Senators and just a delegate in the House, not a true Representative. The delegate has no voting rights on the House floor. Their license plate proclaims "Taxation Without Representation" like it's a point of pride. Didn't we fight the Revolutionary War over that?

They sent a Mayor, Marion Barry, to prison for being a crackhead and then reelected him after he got out. They had a decent mayor in Adrian Fenty, a Republican, and sent him packing after one term to replace him with yet another corrupt Democrat in Vincent Gray. I guess improved schools and higher graduation rates, lower homicide rates, better retention of social workers to help ease the backlog of investigations at Chile Protective Services, improved delivery of EMS services, expanded healthcare for the uninsured and the legalization of same-sex marriage was too much for liberals to handle.

But back to the license plates. They have a huge list of banned personalized plates. The full list is here. Oddly, in the nation's capital, you are not allowed to have a plate that says FREEDOM. Or VETERAN. Or SOCEUR, which is Special Operations Command Europe. Or RONPAUL. Or AUH2O (Goldwater, a Republican). Or REPBLCN. Or RGTWING.

Now, over in Maryland, as you may recall back in January I wrote about how 3 different kids were suspended for making a finger-gun gesture. The dreaded Assault Finger. Well, now Maryland has managed to further embarrass itself. Seven year old Josh Welch, a second-grader at Park Elementary in Baltimore, was suspended for biting his Pop Tart into the shape of a gun.

Yes. You read that correctly. Digest that morsel a second, will you?

The Insidious Assault Pastry. I shit you not. And it gets even more insane. They actually sent home a letter to parents offering counseling for kids traumatized by catching a glimpse of the weaponized breakfast item. The full letter is here, but the gist is this:

During breakfast this morning, one of our students used food to make inappropriate gestures that disrupted the class. While no physical threats were made and no one was harmed, the student had to be removed from the classroom....

If your children express that they are troubled by today’s incident, please talk with them and help them share their feelings. Our school counselor is available to meet with any students who have the need to do so next week.

Meanwhile, over in Arizona, a high schooler was suspended for...wait for it.....having a picture of a gun on his laptop.

Daniel McClaine Jr., a freshman at Poston Butte High School in Florence, said he saved the picture, which shows an AK-47 on a flag, as his desktop background on his school-issued computer. A teacher noticed it and turned him in, likely receiving praise from administrators for thwarting an armed insurrection.

Since the laptop belongs to the school, the district policy states students are prohibited from “sending or displaying offensive messages or pictures,” and cannot access, send, create or forward pictures that are considered “harassing, threatening, or illegal.”

McClaine said he read the guidelines but does not consider the picture threatening to anyone.


McClaine, who is interested in joining the military after graduation, says he found the picture online and that the weapon is not his.

Although we cannot specifically discuss student discipline, we can certainly agree that violence in schools is a sensitive and timely issue. Students, parents and staff are on edge, and the daily news delivers more reasons for caution. All of us must work together to protect our kids and to cultivate an environment that is conducive to learning.


Learning, my ass. We will not tolerate anything interfering with the Liberal Indoctrination of the Masses is more like it.

Beware of things that even remotely resemble a gun... 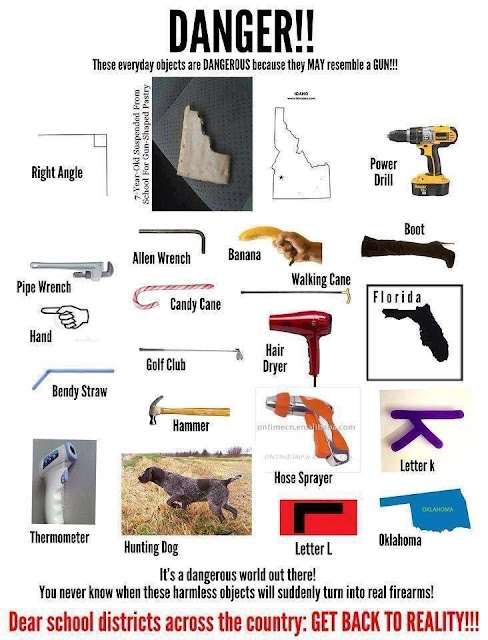 Things are a little different here in Montana,

Last week at a middle school science fair one kid's experiment was the size of a holes made by bullets of the same caliber and differnet composition.

Apparently none of those Poston Butte kids will be learning about the country of Mozambique. Their official national flag includes an AK-47.