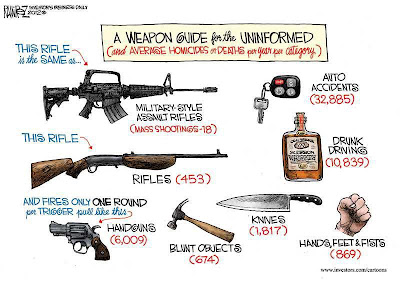 When I was a student at the US Army's Military Police School, we had this one fun instructor who used the phrase "Save your watch. Your boots are lost ". When he said it, he raised his watch arm over his head. What he meant was the bullshit was getting so deep that your boots were already ruined but you could still save your watch.

Ladies and gentlemen, save your watches.

The gun control debate rages on unabated with more and more stupidity and ignorance coming from The Left. Would you expect any less?

Below we see a blow up of a picture that ran in the Chicago Tribune. You'd think that people that know Oh So Much about guns as the denizens of gun controlled Chicago, a place where you can't own a gun but is the gun crime capital of America, would know their nomenclature and gun anatomy. 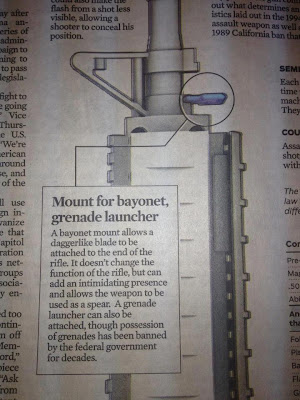 My God, people. The piece circled is not the bayonet lug. It's the sling swivel. This allows you to mount the dreaded SLING to your weapon. You know, a shoulder strap for carrying it. I'm sure some left wing dipshit with no shooting experience will tell you a sling makes the assault rifle easier to handle on full automatic when spraying a school bus full of underprivileged crippled minority kids.

I like how the reporter says you can use a weapon equipped with a bayonet like a spear. Maybe you might get some distance throwing a seven pound weapon with all the flight characteristics of a brick. I can't.


The other function, presumably, of this evil bayonet lug (which is actually just above the circle at the 11 o'clock position) is to attach a grenade launcher according to the author. Oh really, now? Please, do tell. How many people have you seen in greater Chicago with grenade launchers? Where the hell would one go to buy one? You guys love to claim that all us Neanderthal gun owners get field artillery pieces at WalMart for a dollar each, but I seem to have missed the endcap display selling the grenade launchers locally. Unlike you, Liberal Assclown, I do have a personal intimate knowledge of the M-203 grenade launcher, the type associated with the AR-15 family of rifles. I carried one for a couple years.

It's low-information morons spreading falsehoods and fallacies that make it easy for the Left to manipulate the masses. Half the people writing about how guns are evil have never even held one, let alone fired one.

The words "clip" and "magazine" get used interchangeably in the media. A clip is used to load a magazine. A magazine holds the rounds. I can't explain in in terms any simpler. 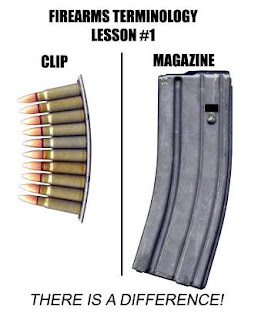 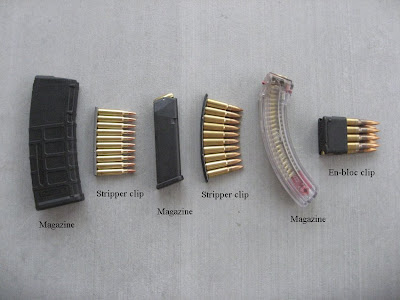 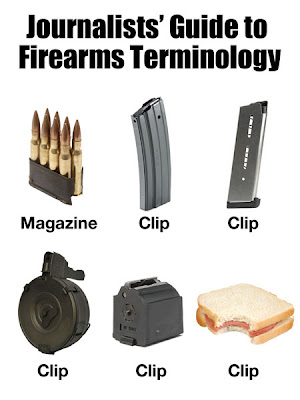 Of course, various weapons have differing features that, according to you, make it an assault rifle. Anything black & scary must be an assault rifle. Kids, we went through this already back in December. As you'll recall, the number one factor is a weapon being an assault rifle is the ability to fire fully automatic, something that civilian, military-styled sporting rifles cannot do unless illegally modified in a criminal fashion. 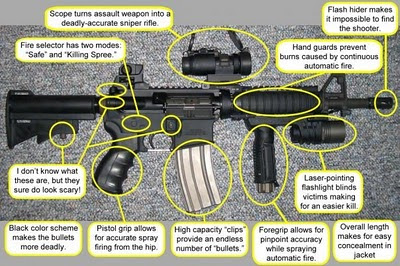 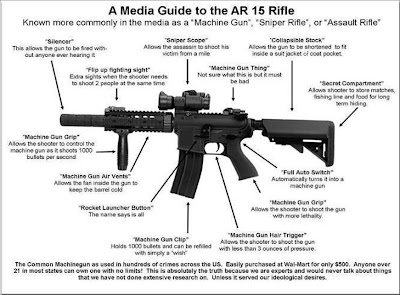 Over in the People's Democratic Republic of Colorado, the state legislature has been fighting a heated battle over a new law to ban high-capacity magazines. The zombie spearheading the bill is Democrat Rhonda Fields, grandstanding on the backs of the victims of the theater shooting in Aurora, which is the district she represents. Rhonda Fields is convinced that people will no longer be killed by firearms if they are limited to less than 15 rounds. Of course, she's a bit biased as her son was fatally shot in 2005. 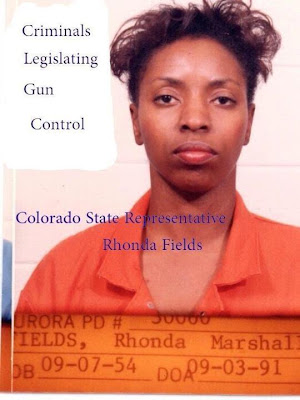 Problem is, I simply refuse to have laws arbitrarily dictated to me by someone with a rap sheet. Seems Miz Fields plead guilty to writing bad checks in 1998. There's also a 1991 shoplifting bust and a larceny charge from 1976.  And, as gun control legislation is always about controlling the masses instead of ensuring public safety, don't forget that while Colorado Democrats are pushing their feel-good anti-gun agenda they're also proposing to reduce the minimum mandatory sentences for crimes committed with guns and have no intention of strengthening the penalties for convicted felons caught illegally possessing firearms. Still believe this is all about public safety?

Of course, the brass had barely finished tinkling on the classroom floors in Connecticut when the Left rolls out Gabby Giffords and her husband Mark Kelly to wave the anti-gun flag. I have trouble when a woman who was more or less pro gun until she got shot now wants to take away my guns rather than push for better mental health care and background checks, and her husband gets spotted buying the same sort of AR-15 they want to ban. He says he bought it to prove a point, that his background check took only a matter of minutes and it was too easy to buy it. Well, hell, chummy, if your record is clean and you have nothing to hide, shouldn't it only take a short time? But, and there's always a but... 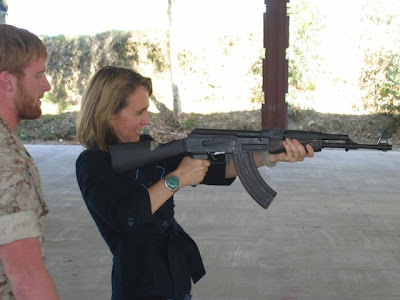 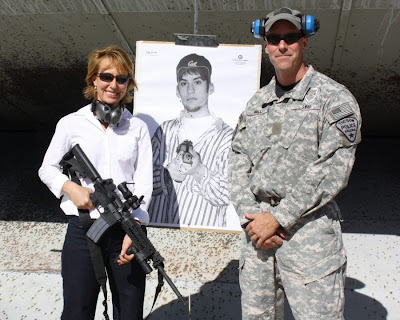 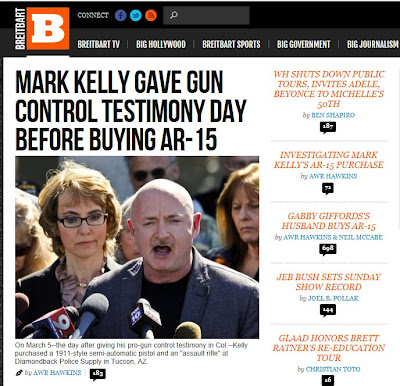 Well, it turns out that the specific rifle that Kelley chose to buy isn’t so easy to buy after all. It was a used rifle taken in by the gun shop as a trade. Therefore, according to the gun shop, it takes longer for the purchase to be completed:

"On March 5, 2013 Mr. Mark Kelly purchased a Sig Sauer .45 caliber pistol and a Sig Sauer M400 5.56 AR-style rifle from my company, Diamondback Police Supply Co. in Tucson, AZ. The rifle, having been purchased in trade from another customer, cannot be released to Mr. Kelly or any other customer for a minimum of 20 days in accordance with local ordinances. Mr. Kelly did not ask for any modifications to the rifle, nor are we making any. Once the hold period is up, Mr. Kelly must then show proper identification, complete the Federal Firearms Transfer Record (Form 4473) and successfully complete the NICS background check prior to his taking physical possession of the firearm."


The local ordinances delay purchases of second-hand weapons by almost three weeks. This raises the obvious question: Why did Mark Kelly choose to buy a rifle that it would take 20 days to buy, if his intent was really to show how easy it is to buy that rifle?

I'm no astronaut but even I can see the BS factor here.  By the way, an armed bystander helped subdue the guy who shot her... 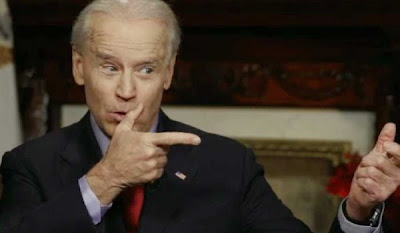 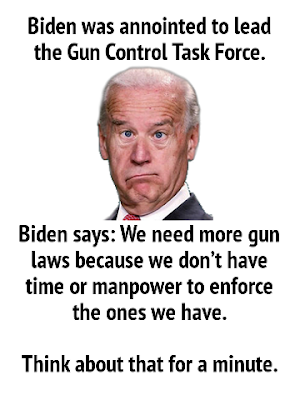 And of course we have lunatic imbecile Joe Biden...how does he even tie his own shoes, let alone get to be a heartbeat away from the Presidency? Uncle Joe just wants you to indiscriminately blow holes in your doors with shotguns, or just fire off a couple blasts into the air off your balcony to scare off attackers. There you go, Joe...Fire through the door without identifying what's on the other side if you get scared. And I'm sure those pellets you suggest we fire in the air will just evaporate before coming back down like lead rain?

Careful, Joe; we might accidentally shoot down a drone. 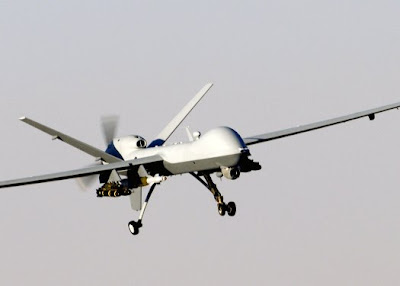