He's at it again. Who? That little turd, Justin Bieber.

As you know by now, I can't stand him. I want him deported, like I said in an article last month. He's a shining example of a kid of dubious talent who got famous and let it go to his head and became an insufferable prick.


He was recently banned for life from an indoor skydiving venue in Las Vegas after he shows up ten minutes before they close, and after they do the indoor skydive thing his crew trashes the bathroom while giving the employees a what-are-you-gonna-do-aboput-it look, and  when the $1600 bill comes he didn't pay. He was given the option of just posting a photo of himself at the place to Twitter and Instagram so the venue could get some advertising in lieu of paying, so Bieber, like a classic douchebag, fakes posting a pic and skates out.

What a dick move. Then again dick is as dick does.

Witnesses say he "was very standoff-ish toward mostly everyone outside of his crew," adding that he was "very disconnected from reality." Probably because he was high on sizzurp. (Oh, did I say that out loud?)

He also had some new strumpet on his jock, a former Hooters chick turned model who is still legally married to a guy deployed in the military. Classy chick.


The NHL is catching a serious ration of flak and backlash from hockey fans of every team affiliation after posting on Facebook a picture of Turdboy in the Chicago Blackhawks locker room with his sizzurp-stained dick-beaters clutching the Stanley Cup with one hand while making the #1 with his other. A #6 Hawks sweater is on a hook behind him with BIEBER on the back. I wanted to vomit. It's a pretty well-known hockey tradition (though some say it;s just a superstition) that you don't touch the Cup unless you have won a Cup and earned the right to touch it. Some say that only applies to players and not "civilians" because celebrites love to dick-ride the winning teams and get their picture taken with the Cup. I have a photo of myself with the Cup taken several years ago and I most assuredly did not touch it. It wasn't mine to touch. Bieber can claim all he wants that he's a born & bred hockey fan from Canada but he only seems to turn up at crucial nationally-televised games where there's a chance he'll get on camera. He does the same thing at basketball gaames too. Fame-whore.

And now video has shown up on TMZ of Bieber pissing in a restaurant's mop bucket.

Yes, digest that a minute, okay?

The video was taken earlier this year in New York, as the little douchenozzle and his entourage were leaving some nightclub, and being too cool to leave by the front door decided to just exit via the restaurant kitchen. Instead of stopping at the men's room like a civilized human being, the little assclown peeled down his ridonkulous tight-yet-saggy Idiot Pants and pissed into a yellow mop bucket that some poor employee was going to have to dump and disinfect in order to clean the floors. His entourage repeatedly states that the restaurant should be honored that Bieber had pissed in their mop bucket. Afterwards, Bieber grabs a bottle of cleaning solution, sprays it on a  photo of Bill Clinton on the wall, and exclaims "Fuck Bill Clinton!".

Look, I'm no fan of Bill Clinton but that's pushing it for a kid here on a work visa. After much public outcry he has now apologized to Clinton, but not because he's sorry he did it. He's sorry he got caught, and it looks good in the news if he pretends to be contrite.

Meanwhile, his ever-present bodyguard stands idly by like a good little lap-dog. Hey, bodyguard dude, have some self-respect. You're just an enabler, allowing him to be a twatwaffle and a churlish boor just to cash a paycheck, all the while looking all serious and stern like you're on the Secret Service Detail protecting the President as he visits downtown Kenyaville on vacation.

Then again, one of his bodyguards was sued for stealing the memory card from a paparazzi camera, and his bodyguards are constantly being sued for battery after assaulting photographers. Be a man, Beeb; at least Sean Penn did the assaulting himself.

But so long as he keeps making people around him rich, people will just let him do whatever he wants. And as long as his imbecile 12-year old fan base are unable to see through the fog of puberty and rub two brain cells together in coherent thought, they'll keep on making their dumbass parents buy his bullshit.

This video makes my soul ache. These people should be throat punched. Boycott him, deport him, make him shrivel up into forgotten dust. 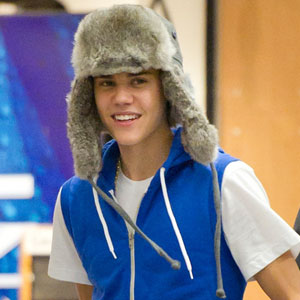