Answering hate mail from a Belieber 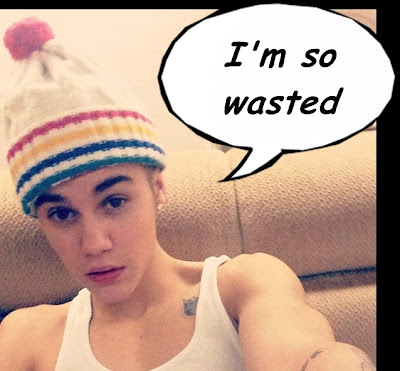 I think I've made it fairly clear that I am not exactly a fan of Justin Bieber. In fact, I find him repugnant and would be delighted to no end if we just deported his narrow ass back to Canada instead of letting his spoiled, privileged, bratty-assed punk self reside here in luxury. I knew it was just a matter of time before one or more of his pre-pubescent fans got their diaper in a twist over my previous articles (found here and here) and threw a hissy fit.

This morning in my inbox I found not one, not two, but THREE comments on one of my articles from a little girl named Ashley McCombs. (Don't like me using your name, Ashley? Then don't include it in your comments sent from your Google+ account.) Judging by the profile picture she looks about 13 or so.I think her parents must be exceedingly proud of her foul mouth and her teachers must be proud of her atrocious spelling and grammar. Here are all three of her comments verbatim:

U guys are all butholes leave him alone he is the best person ever I LOVE YOU JUSTIN!! Love, A BELIEBER< 3

You all need to shut the fuck up,like leave justin alone he never hurt anyone of you so why are you all talking shit about him justin bieber is not a "twit" or a "dushbag" he is an INSPIRATION he gives kids all over the world hope, and tells them to never give up on there dreams and to always work hard, just because he did some stupid things in his life doesn't give u the right to Judge him because the truth is all teenagers do stupid things just like u guys Prob. Did so I think u should stop talking shit about him and start saying good things about him because he is a really good person. Love, A BELIEBER < 3

All of u are dumb asses like shut the fuck up like u all think that your perfect but nobody is in this world just cuz he is famous doesn't mean he has to act like a stuck up little bitch,he is a teenager let him act like one every teenager does this,I'm pretty sure all of you guys have done stupied things in your lifetime so leave him alone it's not like he ever hurt anyone of you SO STOP TALKING SHIT ABOUT HIM HE IS THE MOST INSPIERING PERSON EVER IN MY EYES HE GIVES KIDS HOPE AND TELLS THEM TO NEVER STOP BELIEVING,AND TO NEVER GIVE UP ON THERE DREAMS!! I love u justin I will always be a BELIEBER < 3


You poor, deluded child. If you're being given hope by a a dick of this caliber then I weep for the children of the world. Are you inspired by a guy who bullies a woman as she works out in a gym and spits in her water bottle? Yeah, that happened back in January. It seems your hero likes spitting on people. Why, just last week he was spitting on his fans, fans just like YOU, from a balcony in Toronto.

Of course, his representatives deny it. This is because he pays them large sums of money to cover his ass when he acts like a dick to people.It's their job to cover for him and deny any wrongdoings. They covered for him two weeks ago when he went apeshit on a DJ at an Ohio club that he accused of taking a picture of him. His bodyguards illegally seized the man's phone and illegally went through it and found no pictures, but that didn't stop Bieber from talking shit about the guy's parents and then spitting in his face. And this is the guy you worship? You look up to a little prick who sends bodyguards to steal peoples' property and illegally search it, something not even a cop can do without a signed warrant from a judge, and even when they find nothing, still accuses the man, insults his family, and then spits in his eye?

Your parents seriously need to put a foot in your bony little ass, kid.

Yeah, your hero is usually too pussy to fight his own battles and sends in his goon squad to attack people, but as long as he has all his posse with him he doesn't mind kicking a man when he's down, like a couple weeks ago when Justin and Company attacked a guy during an argument over a couple of women Justin was taking back to his hotel room. Unlike you, these women were grown adults, aged 24 and 32, and really, there's only one reason two adult bar waitresses, one of them probably closer in age to your mom than to your age, were headed to a hotel room with a celebrity. I'm not sure if they've covered the birds & the bees at school yet, Princess but he wasn't buying them hot cocoa at the hotel restaurant. How about the married chick he was out with when he stiffed the crew at the skydiving place in Vegas and didn't pay?

Your hero's tour bus was stopped at the US/Canadian border and officials found dope inside it. Boy Wonder wasn't on board but this also isn't the first time his bus was found loaded down with drugs. Hw was kicked out of a Chicago nightclub last month too for underaged drinking. Yeah, your hero is a stoner and a drinker. I bet your parents are so proud of your choices, Ashley. What'll they find in your diary or hidden in under your bed?

And finally, what the hell causes a 19 year old boy to show up at his grandmother's door buck-ass naked with a guitar over his junk and sing to her? That's creepy. And it's just as creepy that his grandmother blew it off. 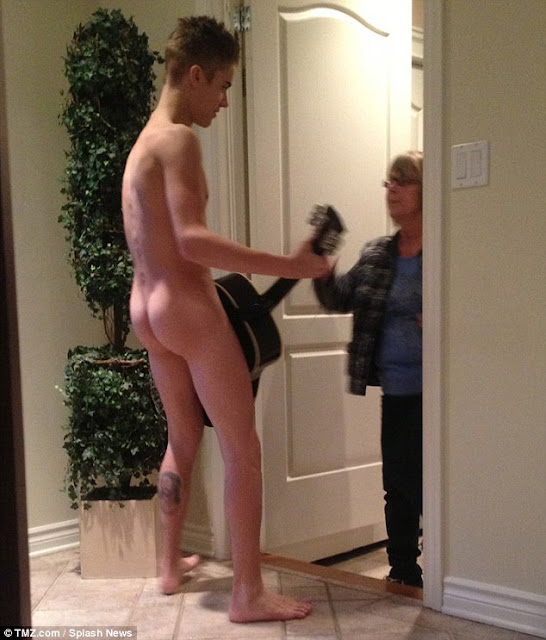 Seriously, little girl...stop worshiping this douchebag and focus on your schoolwork, because really, you need some grammar and spelling help. You say he's a normal teenager doing normal teenage things? If this is normal then we are doomed as a species. And remember to think twice before messing with your elders and your betters.

what is a dushbag, and since when is saying someone acted stupidly not judgmental?

critical thinking as well as spelling must be electives at her school.

I would reckon it's a carrying satchel for dush, whatever dush may be.

And remember, our schools these days are the Left's indoctrination centers, so when Lord Messiah Obama says someone acted stupidly, best believe it will enter the lexicon of our idiot youth soon thereafter.

If the kid had bothered to fully read my article she could have just copied my spelling of douchebag, and it's also a word recognized by spell check, a feature she lacks on her operating system.