The Super Top Secret But Obvious Punishment for Disprespecting the Flag 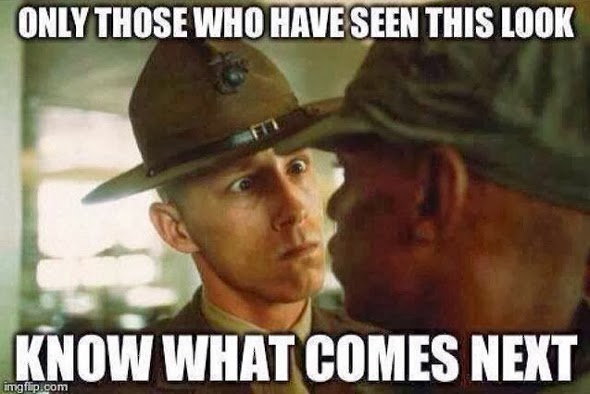 Ah, yes. As you'll recall in my last article, once the shit hits the fan, it accumulates and rolls downhill when you're caught doing Dumb Things in uniform and it brings discredit upon the military.

Yeah, troops are basically government property but you do retain your 1st Amendment rights to free speech, providing that free speech doesn't bring the aforementioned discredit, to the flag, or the military, or the nation.

Well the punishment for PFC Tariqka Sheffey's ducking out of duty to hide in her car taking Instagram selfies and avoiding saluting the flag at the end of the duty day has been meted out.  Leaders at Fort Carson said all options, including court-martial, were on the table. However, the post Public Affairs Office now says the situation was handled by a unit commander, and won’t specify what action was take, or which level of command acted. They're acting like her punishment is some giant secret. Any dillweed with more than 8 weeks in uniform can read between those lines and tell you that her company commander issued an Article 15 non-judicial punishment under the Uniform Code of Military Justice. I find it hilarious that the Army actually issued a statement saying that they were basically keeping the punishment a secret.

Maximum penalties for an enlisted troop depend on the rank  of the officer imposing punishment. There are three types of non-judicial punishment commonly imposed.

Summary Article 15: commanders (O-3 and below)  may impose:


Company Grade (O-3 or below) commanders may impose the above plus:


The punishments listed above may be combined with certain limitations listed in the Manual for Courts-Martial, Part 5, Section 5(d). For example, extra duties and restriction and forfeiture of pay and reduction in grade could be imposed. Remember, it rolls downhill and the accused is at the bottom of it.

Accused are permitted to refuse non-judicial punishment in favor of a court-martial; this might be done in cases where they do not feel their Commanding Officer will give them a fair hearing. But this option exposes them to a possible criminal court conviction...and jail time.

So since it appears her Company Commander, Captain Lee, issued the punishment and not the Batallion Commander, Lieutenant Colonel Barton, she likely got a Company Grade Article 15. I doubt she got correctional custody, as she's a single mom and the Army would look bad if they jailed her for 7 days and left her kid to the tender mercies of some form of social services. She likely got busted a pay grade back to E-2 (and will likely get that lost rank back in six months if she keeps her nose clean), and quite possibly lost 7 days pay. Extra duty? Yeah, probably, unless they cut her slack for child care. I'm pretty sure she got that letter of reprimand in her personnel jacket too. All in all sounds pretty fair, commensurate with her infraction.


Over in Wisconsin, Specialist Harrison, she of the funeral detail shenanigans, has been removed from funeral duty indefinitely pending outcome of the investigation into her hijinks. She'll likely receive a Company Grade Article 15 too. Another soldier in the Wisconsin National Guard, Sergeant Luis Jimenez,  has also been suspended from funeral honors duties because of comments he made on Facebook after Harrison was criticized. Smart move, dude. Publicly stick up for someone getting death threats for blatant disrespect of war dead.

“[Harrison] isn’t disrespecting anyone … It’s actually a selfless commitment she has made. These [military funeral] practice sessions are very long. It’s good to let loose a little when your job constantly asked you to be serious,” Jimenez wrote in a Facebook post, which has since been removed. Genius level stuff there, Sarge. Like I've said before, letting off steam is cool; doing it in uniform and on top of a casket draped in the flag, empty or not, and posting that a family is going to get less than your best because you're cold? That ain't cool. Good luck making E-6 now, pal.

And Staff Sergeant Cherish Byers, our Air Force cop who took a picture three years ago tongue kissing the POW/MIA? Well, her incident is still being looked at by the Air Force in its own leisurely pace to determine whether or not any punishment is warranted, as the picture was taken three years ago but was only just recently discovered. However, a statement was issued by none other than the Chief Master Sergeant of the Air Force. Yeah, the top enlisted troop in the entire Air Force. Talk about rolling downhill...

Chief Master Sergeant of the Air Force James Cody said Friday in a statement, "I want to make it clear that this is not a reflection of airmen who wear this uniform; it is a case of poor judgment of one airman ... to say we are disappointed would be an understatement. We are gathering all the details and will take appropriate action at the appropriate level. Our airmen fully understand the significance of the POW/MIA flag and the sacrifice of the men and women it honors.".


Not everyone was against her though. One blog site says we should just forgive her & basically let bygones be bygones. Why? Because she's hot, in the author's opinion, and that must mean we have to forgive her. And the author, one Noah Gulliver, had the audacity to dig up pics of Byers out of uniform to prove her hotness so we can forgive her. We also need to forgive her because she's military, and if she was a civilian and did the tongue thing it would have been worse. No it wouldn't , dumbass; you almost overlook a civilian who doesn't know any better. Military people know better. Or I would expect they would. And lastly, you have to forgive her because she's black. Seriously, this asshole played the race card and said if she was a blonde white chick we'd have already forgiven her. Please...go leave some choice comments on the article. Because he seems to have forgotten Lyndsey Stone, the white chick eventually fired from her job for stupidly posting a photo on her Facebook page from a trip she took with her employer – on her employer’s dime – being a disrespectful little snapperhead. Your racism claims are pure BS, chumley. My guess is she'll get a letter of reprimand and not an Article 15, given her public remorse over the incident and the fact it's three years in the past. In the interim three years, she's been promoted, and received awards for Airman of the Month and Airman of the Quarter. So it's obvious that by & large she's not a bad troop, but she mad a mistake a few years back that's caught up to her.I wouldn't count on seeing E-6 any time soon though.


The bottom line is this: think before you post. Don't dishonor your uniform, your service, or our flag.