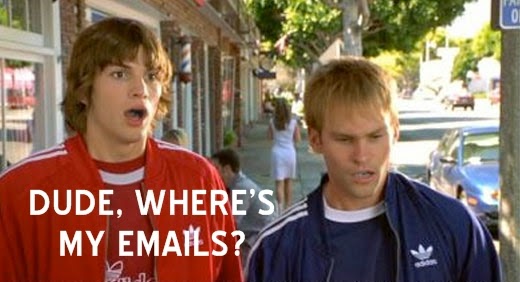 Forrest Gump may not have been a smart man, but even he would have known that emails aren't stored on your hard drive. I'm simply amazed that the IRS, and well really the entire Obeezy Administration and the Democrat Machine, are so effing arrogant and corrupt that they think everyone around them is too stupid to see past their bullshittery.

The IRS is Obeezy's Gestapo. A weapon to destroy enemies among the American people and to keep the rest in terrified acquiescence. Who's gonna enforce Obamacare? IRS agents. You were forced to buy it and the IRS will take your money to ensure you obey. And if you cross the regime, the IRS will target you for audit and if you have (or want to have) tax-exempt status, it will be stripped or denied. Who better to enforce redistribution of wealth than the Tax Man? 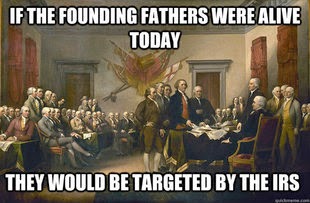 We all knew that conservative and Tea Party groups, under orders from the DOJ and Eric Holder, were being targeted by the IRS and audited at a rate more than 10 times higher than anybody else. And we all knew it was a crock when after it came out the targeting was NOT the result of two rogue low-level agents at the Cincinnati IRS offices, as was the claim. That sham had a maximum effective range of zero feet coming after the Obeezy Regime blamed the Benghazi attack on a YouTube video and left four Americans to die (but that's another scandal and a blog for another day...). 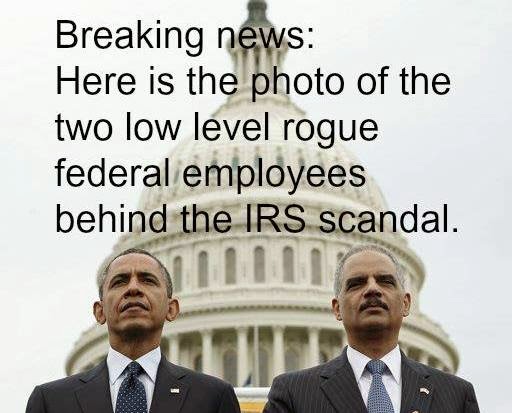 So we get the chick who was the director of the IRS Exempt Organizations Unit, one Lois G. Lerner, on the carpet in front of Congress wanting the truth, which we knew wasn't gonna be forthcoming. And she professed her innocence before pleading the Fifth, which actually negated her ability to use the protection of the Fifth Amendment (by making a statement of innocence), a point well-made most vehemently by South Carolina Congressional representative Trey Gowdy. That dude has quickly become one of the biggest names in Conservative politics and a force to be reckoned with lest he open a can of Constitutional Law Whoopass on you. But Lois takes the Fifth and refuses to talk, and so they subpoena her emails. 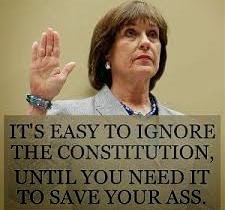 Guess what? Said emails for an entire two year period that conveniently covered the dates of the targeting are GONE. Seems that according to the IRS Lerner's hard drive crashed and the mails were lost, when the drive was recycled and destroyed.

Seriously? You expect us to believe this? Of course you do; you think everyone is stupid and in awe of The Great Obeezy and His Donkey Party, and those that question Him are Racist Un-American Terrorists. 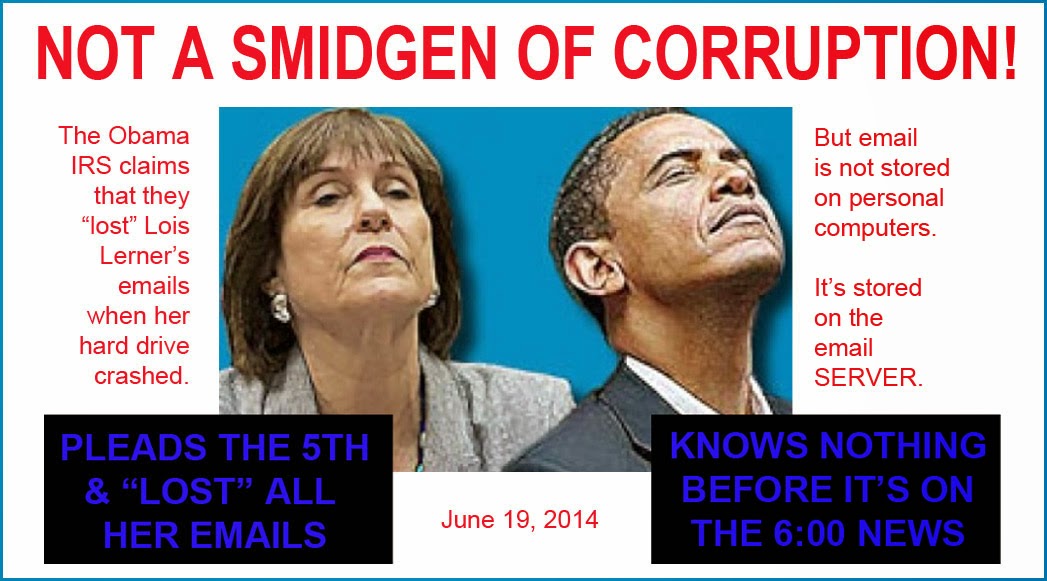 Emails may indeed be stored on a local hard drive but they don't exist just there. Those are just saved copies. They exist on SERVERS. And by law, corporations (including the Feral Gummint™) have to hold on to email correspondences for a certain period of time in their email servers for situations that include, say, subpoenas. If you check your Gmail or Yahoo email from your laptop, that email isn't on your laptop, it's on their servers. Same with your phone. You must think we're like a three year old who thinks there are tiny people inside the TV or inside the radio and that's what makes them work. The IRS expects fully for you and me to produce every shred of paperwork and receipts for the past seven years instantly upon their command and if we used an excuse the equivalent of The Dog Ate My Tax Return, we'd be in federal prison trying not to get ass-raped in the showers and looking out for someone trying to shank us with a shiv in the laundry room. But they can just say oops we lost 'em?

While conveniently losing removing and subsequently destroying Lerner's hard drive, at best you destroyed some locally downloaded and stored mails. The actual mails are on the IRS mail servers. Well, there were... I'm sure by now those have been scoured clean too just like magic. It was probably like 1945-circa Berlin with the Nazis burning Holocaust and other war crimes files while the Allies closed in. 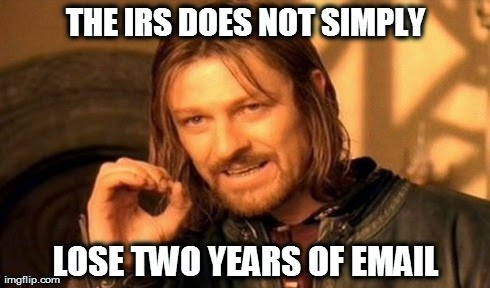 And current IRS Commissioner John Koskinen was all smug while being questioned this week about the emails until Trey Gowdy and Paul Ryan among others took him apart limb from limb.
I am sitting here listening to this testimony. I just – I don’t believe it,” Ryan said to Koskinen. “That’s your problem. Nobody believes you.”

Ryan accused the IRS of misleading Congress by previously claiming that no targeting occurred and then that progressive groups were also targeted by the IRS. “All of those things have been proven untrue,” Ryan said.

“We told you on Monday,” Koskinen said about the six additional hard drive crashes.

“You told us on Monday because we asked you! We asked you if any other hard drives crashed. This is unbelievable. You told us in May you were going to give us all of Lois Lerner’s emails and you learned in February that this crashed,” Ryan said.

“I’m not asking you a question, I’m making a statement…You can turn [taxpayers'] lives upside down. You ask taxpayers to hand over seven years of their own taxpayer information in case they’re ever audited, and you can’t keep six months of emails?,” Ryan said.

“This is not being forthcoming. This is being misleading again. This is a pattern of abuse, a pattern of behavior that is not giving us any confidence that this agency is being impartial. I don’t believe you. This is incredible,” Ryan said. 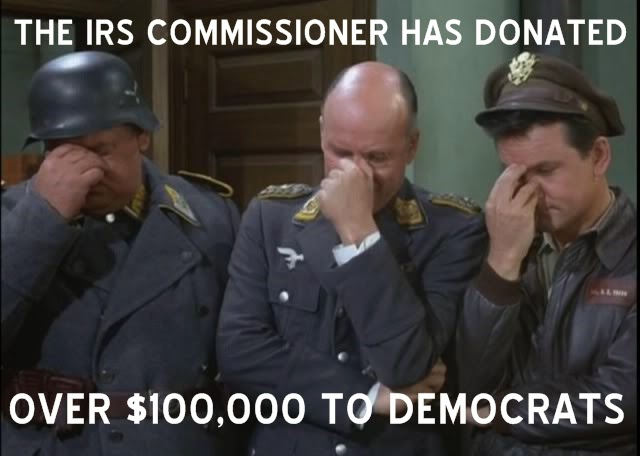 Gowdy also lit into former IRS lawyer Jennifer O’Connor to ask what the loss of the emails looks like outside the  Beltway to the average American.

O’Connor, a White House lawyer who previously presided over the IRS’s effort to collect Lerner’s emails, was grilled by Gowdy over the search’s parameters, which he claimed were unnecessarily limited.

“What’s wrong with the search terms being ‘to’ and ‘from?’” he asked.

“Well that would get you everything –” O’Connor began. 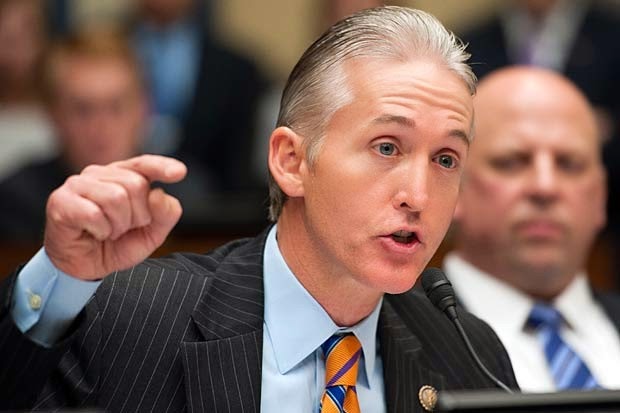 Congressman Gowdy got particularly heated when trying to explain to O’Connor why the failure to retain Lerner’s emails was so outrageous.

“What negative inference would you draw — if you were just one of our fellow citizens watching this,” Gowdy said. “You know that initially there was a denial of targeting. You know that she picked a very obscure [American Bar Association] conference to disclose that targeting had taken place.”

“You know that initially it was blamed on two rogue agents — in fact, Jay Carney perpetuated that myth,” he continued. “You know that Lois Lerner took the Fifth Amendment. You know that the president of the United States said there was not a smidgen of corruption. And now you’re told that the evidence doesn’t exist, the emails don’t exist.”

“What negative inference — if you were just a regular citizen sitting at home watching this, and you’ve got that litany of failed defenses, those false, exculpatory statements, and now you’re told that evidence doesn’t exist — what negative inference would you draw?” the lawmaker angrily concluded. 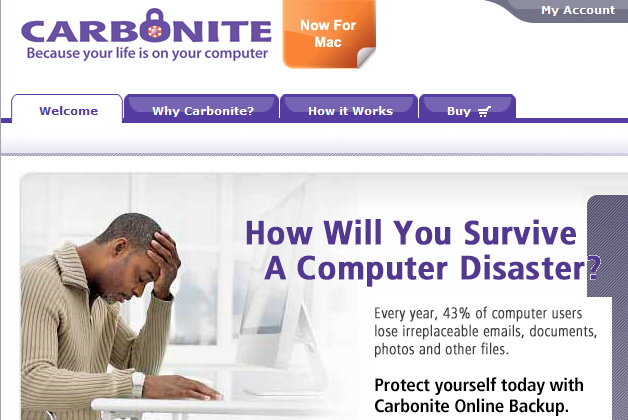 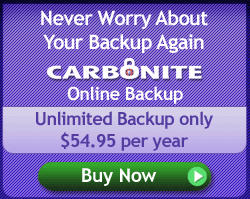 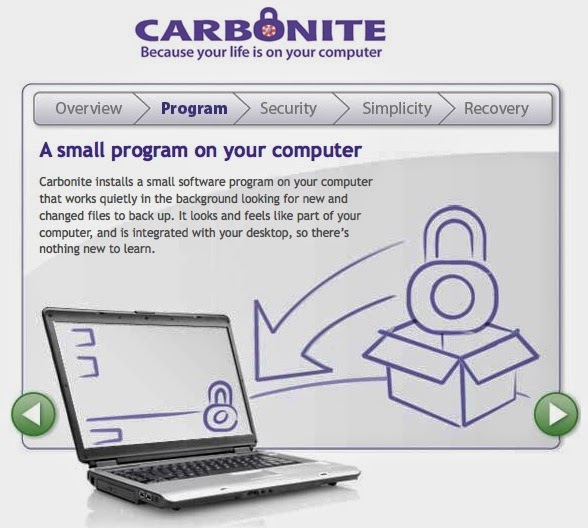 Hey, Government: even the most base and meek among us are able to partake of cloud-based online backup services like Carbonite. I bet they'd cut you a cheap bulk rate too. Or, just get the records from the NSA. They spy on EVERYONE. Hell, they know what I had for dinner last July so I'm sure that vast warehouse of theirs out in Utah has Auntie Lois' emails on a server or a thumb drive. 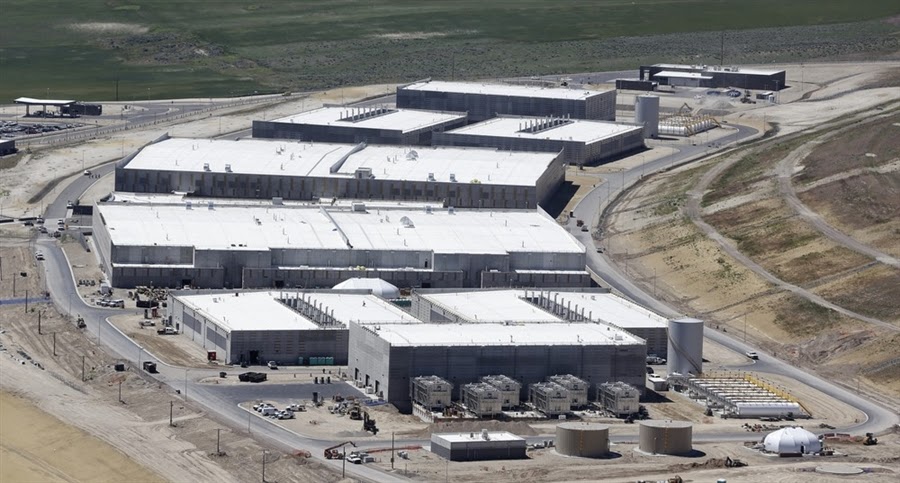 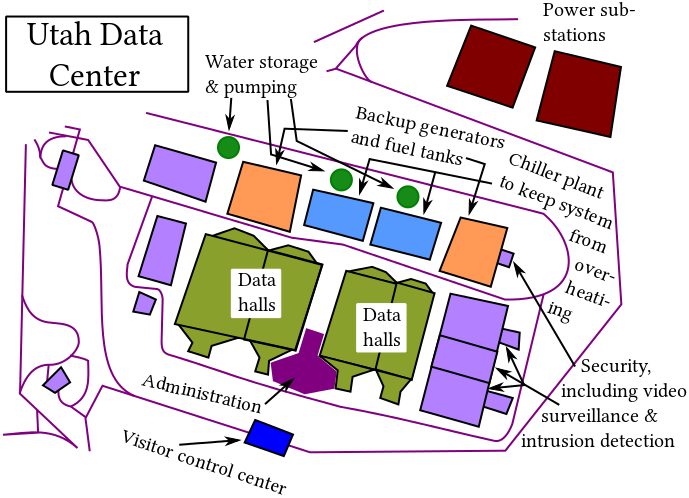 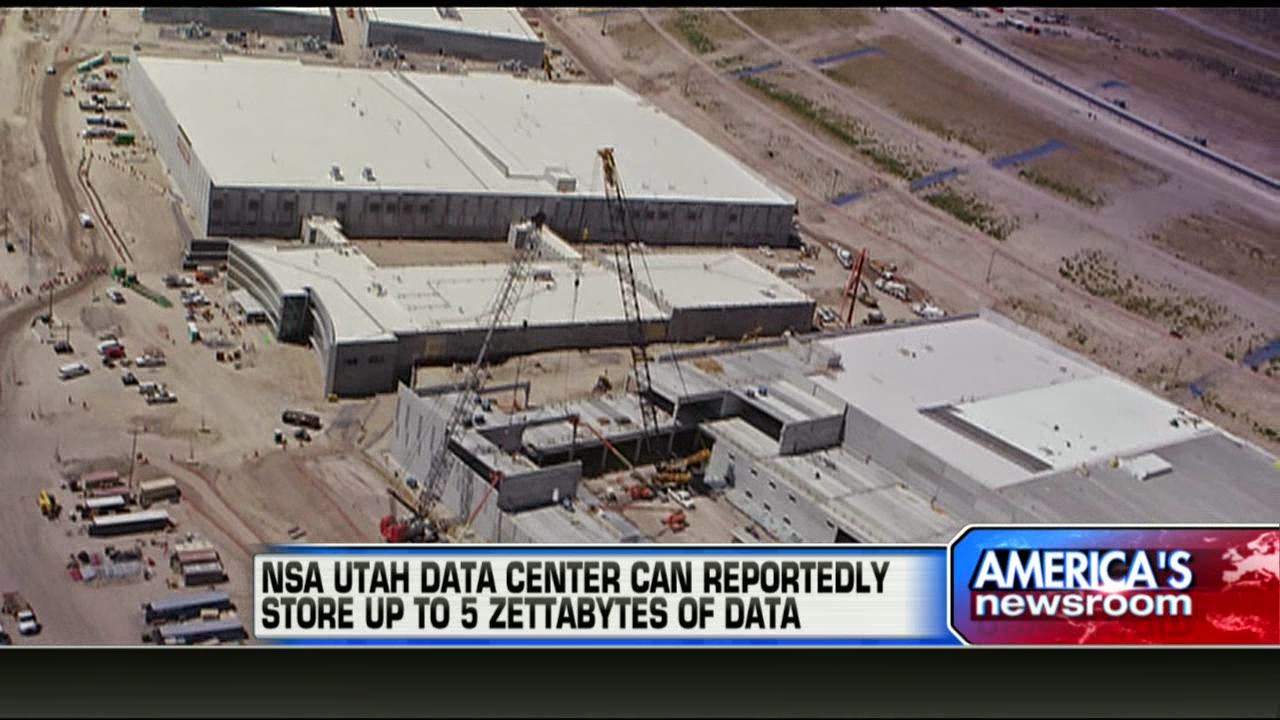 It's beautiful to see the Left unraveling over this, crumbling under the weight of all their scandals and illegal operations. Even their lapdog propaganda machine in the Lamestream Media is questioning the veracity of the junta's excuses and dealings. I sure as hell don't expect them to embrace the Right any time soon but it's admittedly nice to see that even they have a threshold for bullshit. 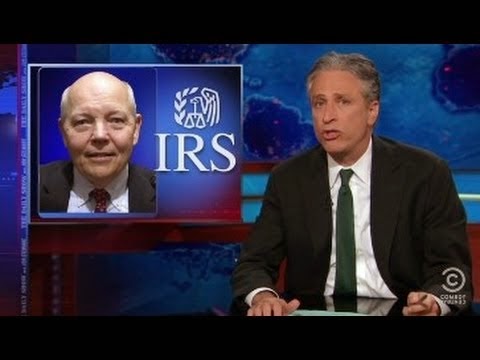 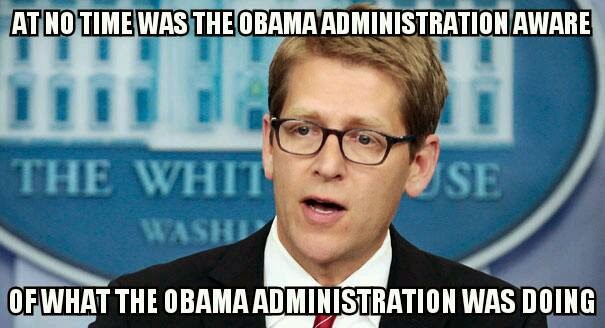