When in doubt, blame guns 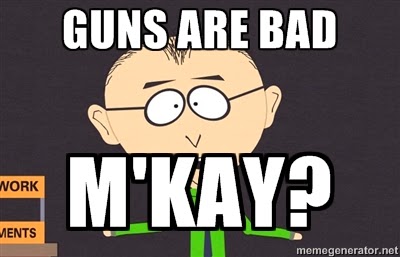 Last Friday a mentally unstable loner, all boo-hoo because he couldn't get laid, a child of privilege (Daddy was an assistant director on The Hunger Games) obsessed with money and status (Drove a BMW that cost more than most of us make in a year), went on a killing spree around Santa Barbara, California. 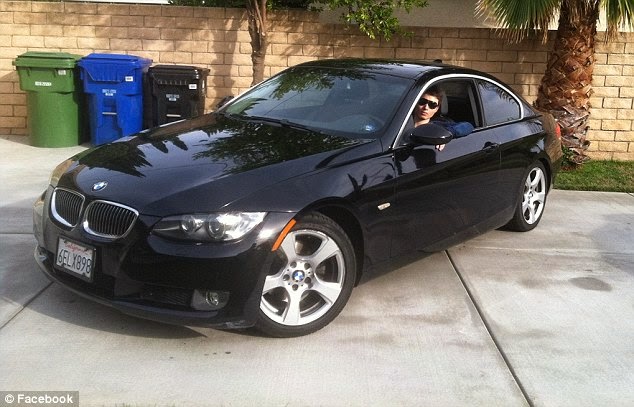 Drunken and self-absorbed party goers ignored him at a party he wandered into 10 months previously, and he was still nursing a grudge because when he tried to push party-goers who ignored him off a 10-foot ledge, they pushed back. This caused him to fall and break his ankle and (gasp!) lose his precious Gucci sunglasses. He vowed revenge, wrote a manifesto, babbled his diatribes on his YouTube channel, gave all sorts of warning signs that he was about to snap that no one figured out till it was too late, and finally lost it.

He stabbed his 3 room mates to death, emailed out his 137-page manifesto to parents, family friends, and at least one therapist, then drove to a sorority house where he shot & killed two girls. He then drives to a deli, gets out, shoots & kills another man, then continues driving along at high rates of speed shooting randomly at people and trying to run them over. When confronted by police, he exchanges fire with them, crashes his car and then blows his brains out. 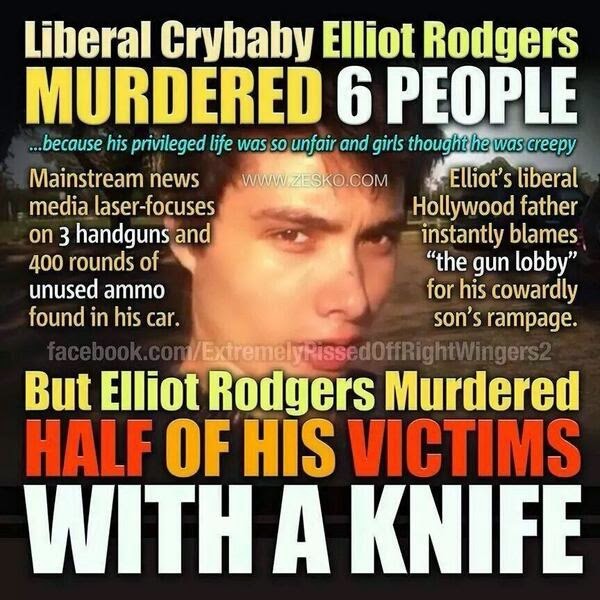 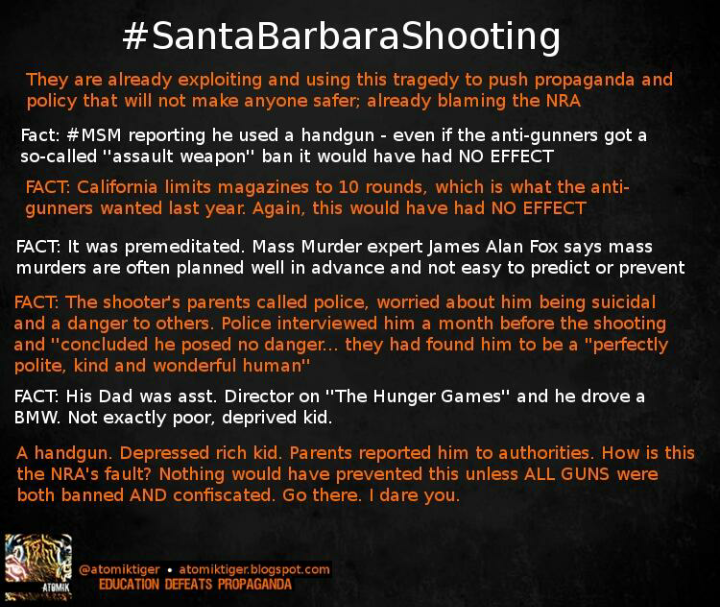 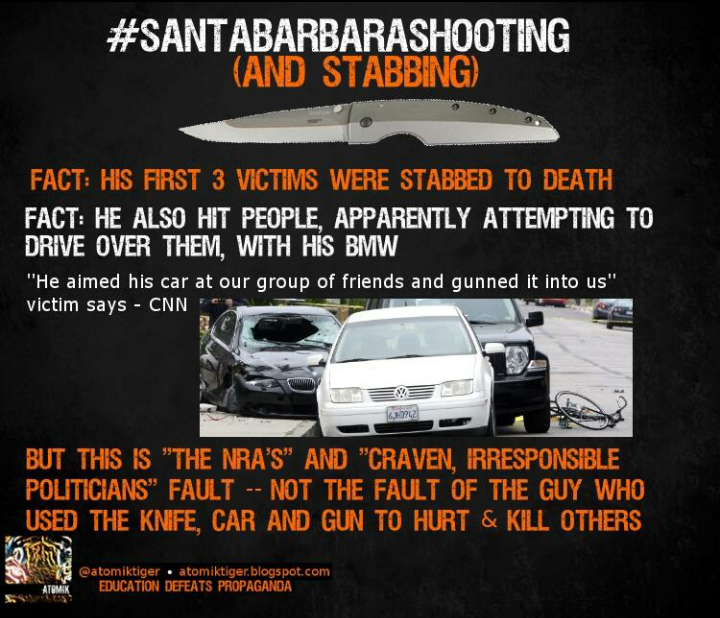 The shell casings were still tinkling on the pavement when the Lamestream Media blamed the NRA and called for gun control. Because, after all, it was the NRA who forced this kid to kill people, right? All they can talk about is the guns, ignoring the fact that he stabbed three of his six victims. A full fifty percent of the dead were killed with a knife but no one is calling for knife control or knife-free zones or stricter knife laws or banning knives. He tried to run people over yet no one is calling for bans on cars and background checks to drive. It's all about the guns. It's a convenient event for the anti-gun lobby to capitalize on.

And of course, there's the war on women. Or as the leftists and feminazis will say, War on Womyn.... because of course this was all violence towards the female of the species... except that four of his six victims were men. A full 66% of the victims were men, but it's a war on women. Again, the Left and their Lamestream Media lapdogs latched onto a convenient political tool for their own benefit.

Senator Richard Blumenthal (D-CT) immediately called for even more gun control. I guess Blumenthal feels the need to be Joe Anti-Gun because of the Sandy Hook shooting. Perhaps someone should tell the good Senator that the people of Sandy Hook ended up voting to put armed guards in their schools. Perhaps someone should point out to Blumenthal that until he started shooting, Rodger actually complied with all of the gun control laws.

You see, the People's Republic of California has among the most draconian gun control laws in the country. The University of California Santa Barbara is a gun free zone.  None of that stopped a killer. Gun free zones don’t stop criminals. Just ask the people of Sandy Hook who put a guy with a gun in their gun free zones to protect them. Recently,  a Jack in the Box restaurant in Houston posted it was a gun free zone. Within a one month period, the restaurant was robbed at gunpoint three times. This gun free BBQ joint in NC was robbed at gunpoint. I guess the perps couldn't read; I'm sure had they known it was a gun free zone they would have picked another place to rob, right? 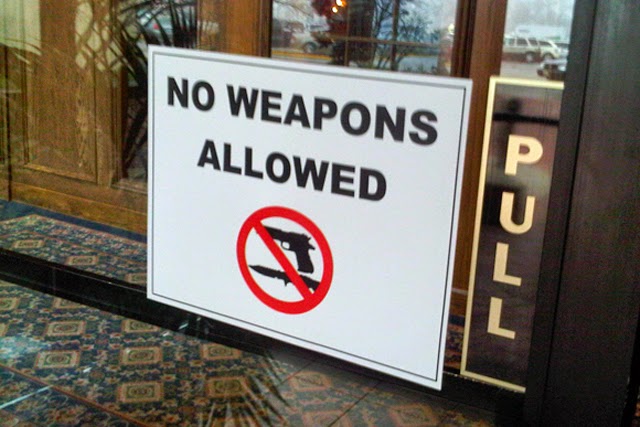 Advertising you are gun free or that people with legal valid concealed carry permits are not welcome to bring their weapon with them does two things: it tells criminals they can rob the place at will with no danger of getting ventilated, and it ensures a segment of the buying public gets discriminated against and will no longer patronize your establishment.

Americans are told that gun free zones and magazine round limits and background checks would stop mass murders.

Yet all of those were in place and they did not stop Elliot Rodger. When Elliot Rodger first began his rampage, he used a hammer and a knife to kill three men...his roommates. Then he used three 9mm semi-auto handguns to kill two women and to kill Chris Martinez. All of those guns were legally purchased with a background check. All three guns had ten round magazines. In fact the two killers at Columbine had ten-round magazines for one of their weapons. Thirteen of them in fact. The killer at Virginia tech had 17 magazines for his weapons. Most of them were 10-round magazines, though some were fifteen. Any idea how long it takes to change a magazine? I can do it pretty damned fast. With practice you can drop one and insert another in about 2 and a half seconds. 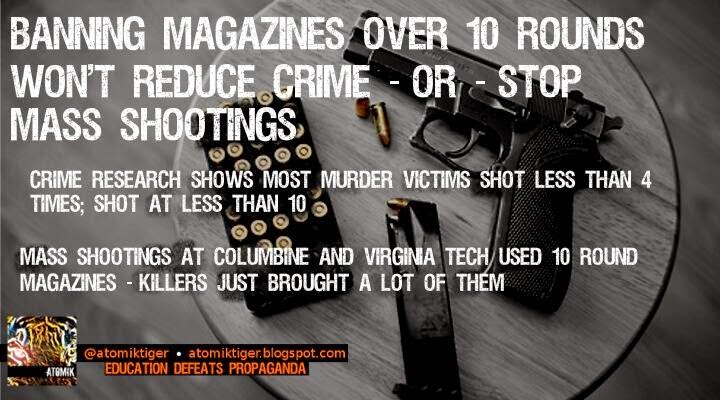 Keep on calling for background checks as if they don't exist. They do exist. I had one done for every firearm I've owned. Elliot Rodger passed a background check for every weapon he carried. And there's no such thing as a gun-show loophole. That's a complete and utter fabrication by the Left and their anti-gun propagandists. 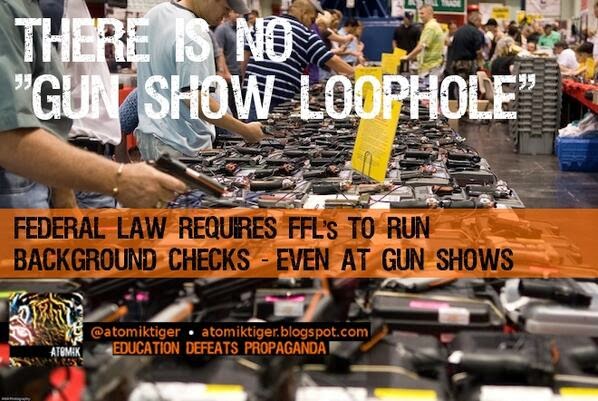 The smoke had barely cleared when the father of one of the slain men immediately cast blame. Richard Martinez, the father of 20-year-old student Christopher Martinez, told reporters on Saturday, the day after the shooting: “Why did Chris die? Chris died because of craven, irresponsible politicians and the NRA.”

“They talk about gun rights, what about Chris’s right to live? When will this insanity stop?” asked  Martinez, who said that his family was “lost and broken” before he broke down while showing pictures of his son smiling in a baseball outfit as a child.

He said: “When will enough people say, ‘Stop this madness.’ We do not have to live like this. Too many people have died. We should say to ourselves, ‘not one more’.”

I'll cut the guy a modicum of slack because 12 hours previous his son was murdered and his body probably hadn't even be released yet to the mortuary. He was still in a state of shock. However...

The NRA is not to blame. I as a gun owner and shooting enthusiast am not to blame. Elliot Rodger is to blame. A mentally ill, spoiled kid who played violent video games all day. A kid whose dad helped direct a movie based on murderous violence between children as bloodsport. But the Left doesn't believe in personal responsibility, only blameshifting and persecution of those who don't believe the way they do, and so the scumbag liberals at The Daily Beast feed the low-info sheeple crap about how the NRA is an evil entity hell bent on murdering babies. Of course there's no mention about how most of the gun violence that occurs is in gun-controlled liberal zones.... 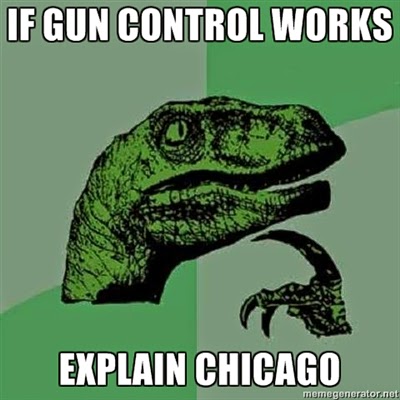 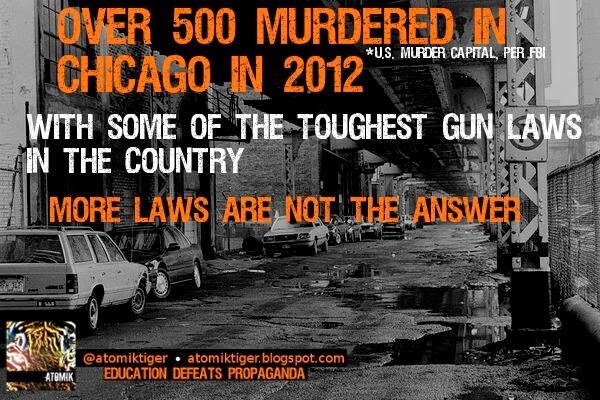 This was a premeditated, long-planned murder spree by a mentally-ill kid. Just like Aurora. Just like Sandy Hook. Just like Virginia Tech. Connect the dots, and you'll see that law-abiding gun owners aren't to blame. 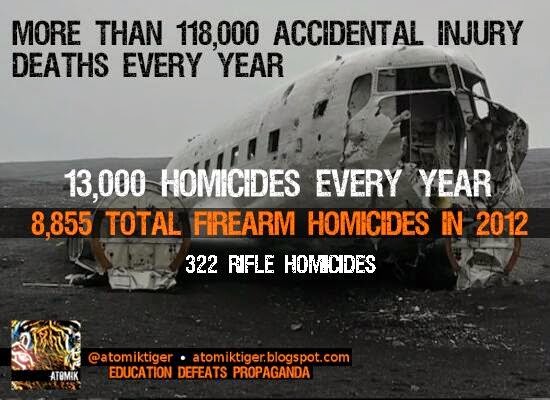 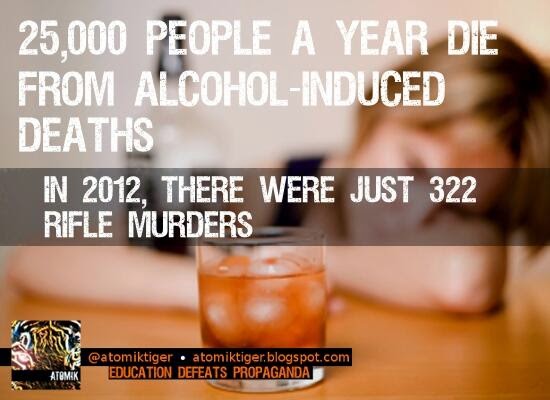 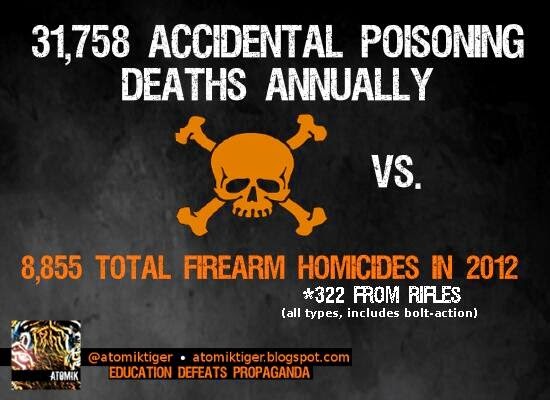 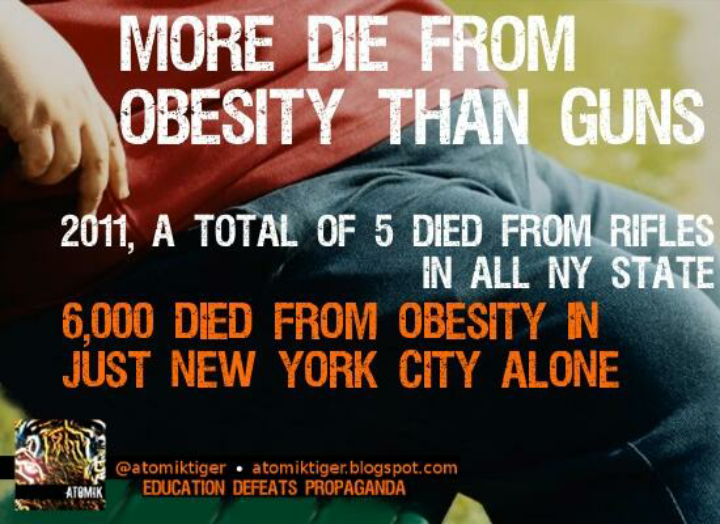 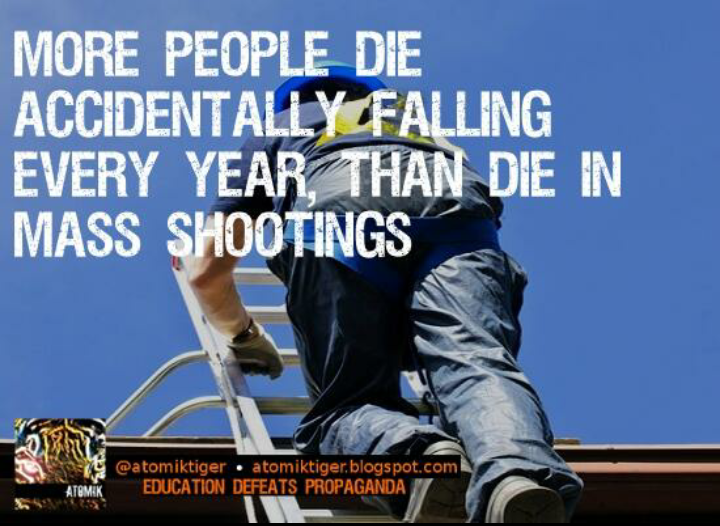 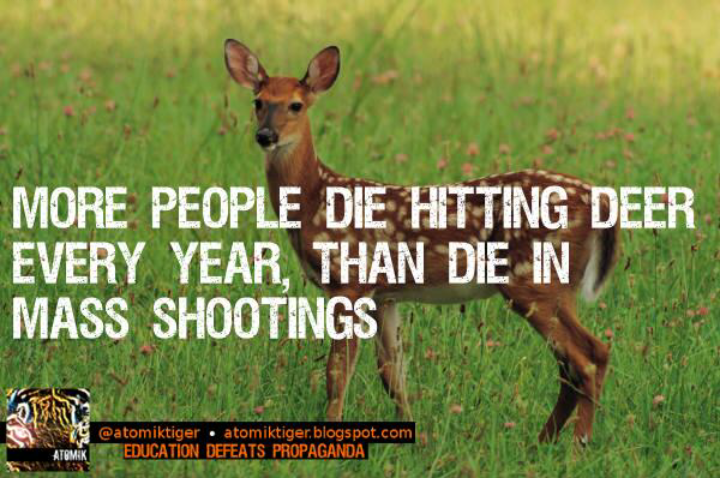 Hat tip and mega kudos to my man Atomik Tiger. I borrowed a bunch of visuals from him for this article. Follow him on Twitter (@atomiktiger) or check out his blog. 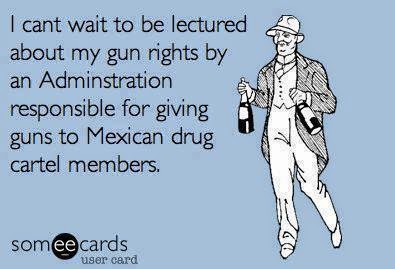