The Entremanurial Spirit in America 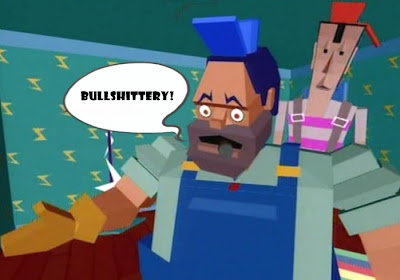 One of the things that makes America great is how our people are infused with this great entrepreneurial spirit. Up until recently, small startup businesses were everywhere, generating the commerce that moved the American economy forward, furthering the American Dream.

America was built on entrepreneurs, not just inventors. Looking back through history, Henry Ford was an entrepreneur. He didn’t invent the automobile, but he built an automotive empire by pioneering the mass-manufacture of them. Samuel Colt or John Browning didn’t invent the gun, but they are synonymous with shooting. Guys like Bill Gates, Steve Jobs and Michael Dell didn’t necessarily invent the home computer, but they took them to new levels. Ray Kroc, Dave Thomas, and Harlan Sanders didn’t invent burgers and fried chicken, but their restaurants are ubiquitous household names. Jim Koch didn’t invent beer but he’s hand-built what many (like me) consider the finest brew in this nation. These are guys who started off in garages, basements, kitchens, shacks, and little workshops and took it to the moon & back. 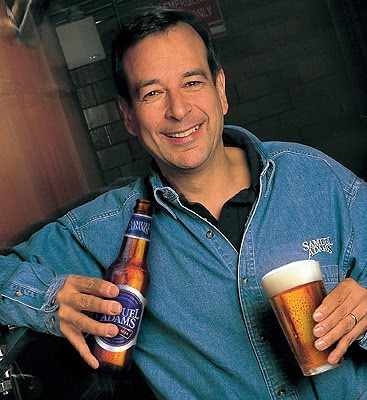 Like him or not, Ron Popeil is a frikkin’ genius. Sure, he was originally an inventor, but he also in addition to his products invented the infomercial. The Pocket Fisherman, Spray-On Hair, everything-O-Matic, Mr. Microphone, the Smokeless Ashtray, his electric food dehydrator; everyone’s owned at least one Ronco product in their lifetime, or at least a knockoff. And I’d be remiss if I didn’t mention Joseph Pedott, who brought us The Chia Pet, and The Clapper.

My personal favorite entrepreneur isn’t even an American, to be honest. For some reason I’ve always found Sir Richard Branson to be pretty cool. The guy never graduated from high school but built 360 companies under the Virgin name.

However, these days our nation is sadly infected with something that I had to invent a new word for to add to the English language. It’s what I refer to as The Entremanurial Spirit®. An entremanure is someone trying to make money via bullshit means, ie: bullshittery.

Two of the original entremanures in America are Joe Francis and Jim McBride. For those of you unfamiliar with their names Francis is the man behind the Girls Gone Wild franchise and McBride is perhaps a bit better known by his website name, Mister Skin.

Francis has made a cottage industry out of wandering from bar to bar during spring break and summer vacations in various popular locales, filming young girls barely legal enough to sign a release let alone legal to drink, as they show us their teats (and often more) and make out with their equally drunk, hot friends, or wrestle with them, or give strip shows, or take showers with them. I’ve been to hundreds of bars in my 40+ years and have yet to EVER see anything even remotely close to what goes on in these DVD’s, so either I was going to the wrong bars or those guys are crop-dusting entire cities with aerosol Roofies before they go filming. There never seems to be a shortage of nubile young tartlets clamoring to show us their funbags and engage in heavy petting with their best friends on camera, as evidenced by the hundreds filmed in the series. A quick check of Wikipedia listed 140 titles in their series. Seriously. They rake in over $40 Million a year. 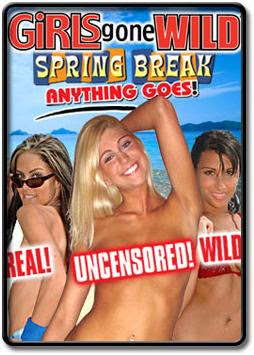 Mister Skin, Jim McBride, is the guy who really did make the website dreamed about by the guys in the movie “Knocked Up”, a Wikipedia-like compendium reference guide to nudity in film. The site can tell you every possible naked moment for every possible star. Why watch the whole movie looking for someone’s left nipple, when they tell you at exactly what second it’s visible through a wet t-shirt? Now you can skip those pesky things like, say, plot and dialogue. After a 2000 appearance on Howard Stern’s show, his site took off and he gets over 7 million hits a month. It took me 2 & a half years to break 100,000.

Seriously. These guys are making ducats hand over fist over what amounts to sheer naked bullshittery. 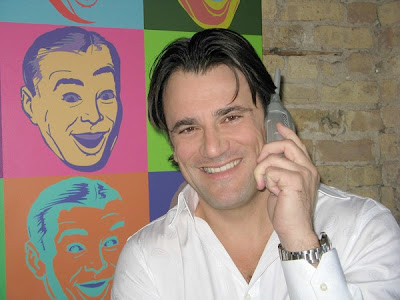 Jim McBride can tell you everything naked. For a fee....

People who sell the naming rights to their babies on eBay? Bullshittery!

There’s enough stupid baby names out there already thanks to Hollyweird without a kid named GoDaddy.Com Jackson. Likewise, selling advertising space to GoldenPalace.com on your pregnant belly is bullshittery.

Selling a Cheeto or a burnt waffle with an alleged image of Jesus on it? Bullshittery.

If you see deities on snack foods and scorched pastries you’ve got problems. Why not sell clouds on eBay because one looked like Homer frikkin’ Simpson? Likewise, people who buy this shit should be punched in the throat. I should find the people who sold glass-encased rhino turds on eBay a couple Christmases ago to save the rhinos and sell them one of mine own turds and claim it looks like a Burmese python. 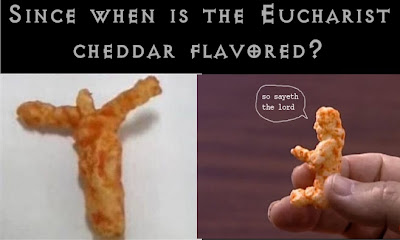 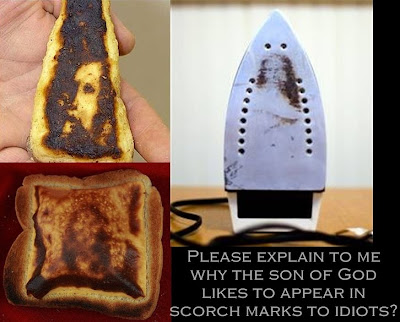 The people who ruined a good thing by bootlegging the Calvin & Hobbes characters into an evil kid who pees on everything and selling it on stickers & shirts? Bullshittery of the highest order. I loved the Calvin & Hobbes comic strip, and Bill Watterson never licensed C&H for anything, let alone something like that. It’s probably part of the reason he hung it up when he did. 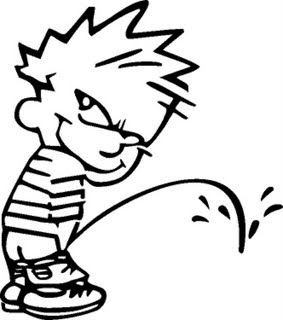 But our latest wave of entremanures are the Gangstalicious, Thugnificent, Pimptatstical Urban Entremanures who take a $400 car, outfit it with $15,000 worth of stereo equipment, roll on down to ColorTyme to rent some fly-ass dope 26” rims, and then paint the car to look like some sort of rolling advertisement for a nationally trademarked product. I’m not sure if this is some sort of ghetto-fabulous urban in-joke to mimic the look of NASCAR rides, but I heard first hand from one of them that most of these guys do it to garner attention and then subit photos to the actual companies in hopes of gaining official sponsorship. The guy we talked to gets a stipend from Trojan condoms for his car’s décor. Seriously.

In the past year, I’ve seen a Suburban with the Big Red gum logo, a chocolate brown ride with the UPS/88 logo, a green & yellow John Deere car, an orange Lumina with Home Depot’s logo on the hood, a gold ride done up with Miller High Life, and others advertising Coke Zero, Oreo cookies, Skittles, Steel Reserve malt liquor, a pink Ford Contour festooned with various Disney princesses, and two McDonald’s cars. And that’s just here in greater Charleston and Colleton County, SC; upstate towards Greenville I spotted, I shit you not, a car done up completely painted in Burberry plaid. My buddy Chris spotted a guy in Greenville who did his K-Car (Yeah, seriously, a freakin’ Dodge Aries K-Car!) done up to duplicate the old #2 Rusty Wallace Miller Lite race car. 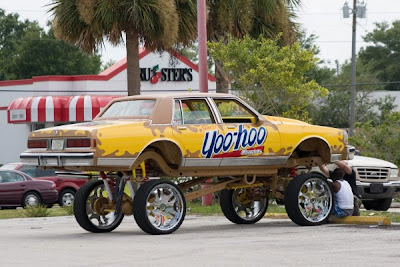 Bullshittery, all of it. Hitching your future fortunes to a dream of a big check from corporate America just because you took it upon yourself to pay out of pocket to have a guy paint your Olds Cutlass to look like a rolling Reese’s Peanut Butter Cups package is just plain bullshittery.

But, even a blind squirrel finds a nut now & again, and at some corporate board meeting a CEO is giving the okay for advertising money to be sent out to some kid with a Lee Press-On gold smirk and pants 5 sizes too big, who drives around his local hood in a pastel pink piece of shit ’89 Caprice Classic former police cruiser with Pepto Bismol on the doors. 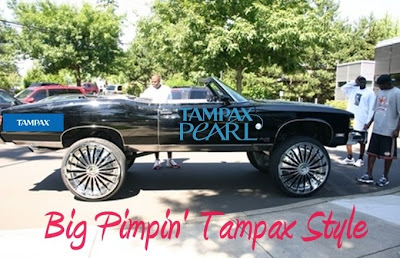 Another fantastic post. You always keep me rollin' with your bullshittery rants!

i know the tampax pearl mobile has got to be fake. no self respecting man is going to roll around with that blood on his caror hands, so to speak.

i need to invent a golf ball gun, to wake up shitty drivers. lite somebody up at 800 fps for bumpin' their music too loud, or taking for fuckin' ever in the drive thru, like it's their first time ever eating there.

Man, is that great..and DISTURBING!
Love "Entramanurial". You are BRILLIANT and SO RIGHT.