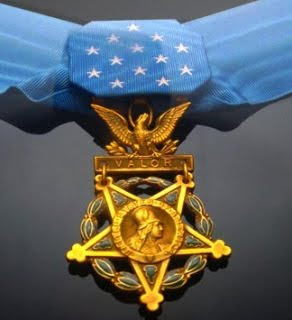 Today the news was mostly full of anger & hate, vitriol and venom, and finger-pointing from both sides of the political aisle in regards to this fiasco in Washington that's been foisted upon the American people by this administration.

Largely unnoticed and not spoken of is the fact that today is National Medal of Honor Day, honoring those who have received this nation's highest award for valor, the Medal of Honor.

There are only 91 living recipients of this medal, of the 851 medals awarded since Pearl Harbor.

237 of those remaining recipients died after receiving their medals.

The average age of the living recipients is 74.4 years.

Of 464 awarded for service in WW2, only 20 are alive.
Of 132 in Korea, 13 remain.
Of 246 in Vietnam, 58 are living.
Both recipients from Somalia were killed in action and received their medals posthumously.
Likewise, all six of the recipients from the current Global War on Terror were awarded posthumously.

God bless you all.

Note, readers, that I call them recipients, not winners. Most people awarded this medal died in the action that merited the award. It's not a prize; not something you win. It's not some cheap trinket. It's not something that any sane, rational, mature person wants to receive. It's something to be taken very seriously.

Regardless of your politics, regardless of Left vs. Right, regardless of your faith, take a minute to be thankful for these brave people who went in harm's way so that you would be free to enjoy all that this country has to offer.
Posted by Steve: The Lightning Man at 3/25/2010 07:44:00 PM

Email ThisBlogThis!Share to TwitterShare to FacebookShare to Pinterest
Labels: medal of honor

We can never give enough thanks for these brave soldiers.

thanks for putting that up, we all need to remember their heroic sacrifices.