A little food for thought, Leftists..... 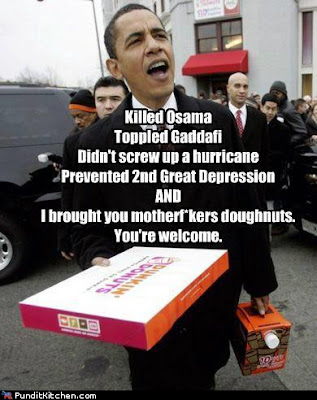 I found the above picture on the Facebook wall of one of my screaming liberal friends. They found it a clever high-five to their chosen god The Most Exalted Obamessiah. However.... some things need to be clarified.

1. Obama did not kill Osama bin Laden. He just happened to be the ass in the seat when US intelligence finally found him. He gave the go-ahead. It was US Navy SEALs that killed him. Ain't semantics a bitch? But the truth, as they say, shall set you free.

2. Obama did not topple Muammar Khadaffi (I spell it MY way. Get over it). In fact, Obama just flailed his arms around calling for MuMu to step down and told NATO to do it themselves after the first few airstrikes. He at least did that much right by letting NATO do the dirty work for a change instead of just us. The Libyan people toppled Khadaffi with help from the outside world.

3. Didn't screw up a hurricane? PLEASE. He sat on his ass on vacation during the earthquake and into the hurricane, playing golf and eating Wagyu beef, AS USUAL. And to clarify, you're implying that Bush screwed up a hurricane in a back-handed way without saying so in so many words; dude, FEMA is a MANAGEMENT agency that comes in AFTER THE FACT to coordinate the cleanup or relief....if anyone screwed up the EVACUATION (or lack thereof) and the subsequently delayed deployment of the STATE'S National Guard units, it sure as hell wasn't Bush, it was liberal Democrat zipperheads like Governor Kathleen Blanco and Mayor Ray "Chocolate City" Nagin . In fact, Bush declared a state of emergency for selected regions of Alabama, Mississippi, and Louisiana two days before Katrina made landfall. The day before landfall, Bush urged Blanco to issue mandatory evacuation warnings. If you can blame Bush for anything it would be a badly worded declaration of emergency that failed to include certain coastal parishes but the state should have found that mistake and rectified it quickly instead of sitting on their hands waiting for the Feds to rescue them.

4. Prevented a second Great Depression? Look at the effing economy, stupid, and tell me he's improved it. This, by the way, is the economy he inherited from a DEMOCRAT-CONTROLLED Congress, the same Congress that was in power through the majority of Bush's Presidency. Remember, kids, Congress controls the purse strings.

5. You brought donuts? How sweet of you. Will that heifer you married now swoop in and eat them all whilst telling us that we need to exercise and you tell us to eat our peas?

Now how about we eat some true Food for Thought? Feel free to blow the below graphic up and read the numbers. 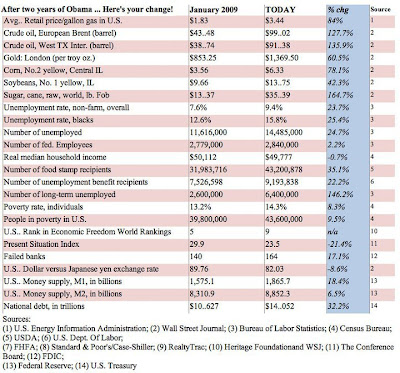 And here we have some true Obama Achievements. 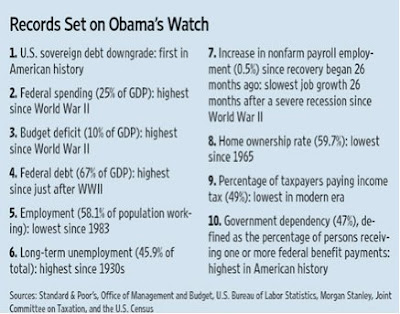 And, in general, let's look at a lifetime's worth of liberals controlling major US cities. I say "lifetime" because they took numbers since 1965, which is 4 years before I was born. 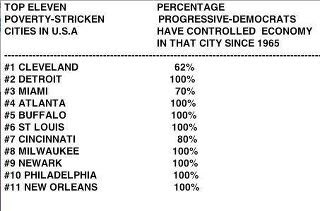 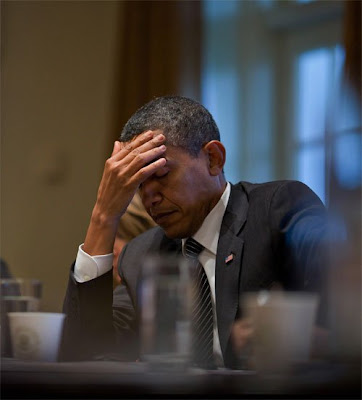 That's right, Man Child... you suck. Your Presidency is a disaster. Your policies are a failure. You've undermined and weakened MY country. Your legacy will put you surpassing even Jimmy Carter as the worst President in United States history. Go away. Soon.
Posted by Steve: The Lightning Man at 10/30/2011 05:13:00 PM

The sad thing is, if you show this to your screaming liberal FB friend, you will get screaming denial of fact.

So now it’s come to that... It’s come to the point where even the left who have been calling the rightwingers “racists” for years now have come to the point where they are calling the right “racists” because they support a man who is not the “right kind of black” I guess that we have now arrived at the day in America where a black man is vilified by other black men, because he doesn't fit their black profile. I guess that the true black man must be a liberal or he is not really the black man that the country needs. I have seen it all now. Blacks like Danny Glover, Harry Belefonte, and Al Sharpton as well as many others calling a back man a Uncle Tom once again only because he doesn’t fit their mold. You all should be ashamed of yourselves, and especially the lefties who claims to be so tolerant. Who say that they is for “Diversity”.
Isn’t it amazing how twisted they make things when they don’t agree with the party that the individual belongs to.

Great comment, AFG...very insightful & well-put. Thanks for coming by!