Lookin' like a fool with your boots on the ground... 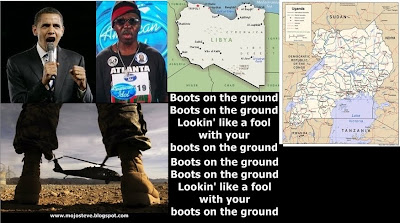 Once upon a time there was a leftist liberal with no qualifications or experience. In an act of sheer stupidity, the American people actually elected this clown to lead them, and lead them he did, right over the cliffs with his lemmings in tow, and dragging the rest of us kicking & screaming along with them to the precipice.

And while listening not one iota to the people around him who called for him to do the right things, the intelligent things, as he dragged our country deeper into debt and ruination, The Anointed One told the leaders of other nations who had been in power for decades to step aside and acquiesce to the demands of their subjects.....calling for leaders in Egypt, Libya, and Syria to step down.

Nearly three years into his disastrous reign of Pharaoh Obama The Magnificent, Gitmo is still open but trickling dangerous enemies of America back out into the world to continue waging Jihad against us. Thousands of US troops are indeed gone from Iraq without that country being truly stable or safe (leaving a further several thousand still there on a rotating basis and still occasionally getting killed). Instead of staying at home these troops are now available to be funneled into Afghanistan, which has become longer than World War Two and seems to be on a course to beat Vietnam for length of conflict. I pray that the casualties don't rival those of Vietnam.

The Great Man takes credit for things that happened under his watch that were continuations of policies and actions set in place by his predecessor, a man he generally mocks and blames at every turn, taking credit for the terminations of Bin Laden, Anwar al Awlaki, and Awlaki's son. His zombie followers hand him credit for toppling Muammar Khadaffi, a man still at large & waging war against his enemies.

And all the while, he claims to have no "boots on the ground", leading me to the actual point of today's discussion. This little fracas we're involved in over Libya was supposed to take a few days. A few months & a few million dollars later we're still involved. Oh, lookie, another psuedo-war we're involved with directed by our Nobel Peace Prize Winner. The original claims were that we'd help out for a bit but that NATO was gonna need to shoulder the burden, and yeah, we did step back and the Leftist Blamestream Media stopped covering the fact that the other NATO countries soon ran out of essentials like, oh, BOMBS for the planes and asked us for more, and, um, EXPERTISE, and called on us for more help.

Now, allegedly we only have a couple people they'll admit to being actually on the ground, four in fact, working under the State Department's chief of mission to assist in rebuilding the U.S. Embassy. Two of the military personnel are explosive-ordnance experts who will be used to disable any explosive traps left in the embassy. The other two are "general security," according to a spokes-weasel. To me, "general security" means Special Operations guys fluent in Arabic and skilled in intelligence gathering as well as being able to shoot their way out of Tripoli if need be. You don't send a couple of 19-year old privates to do a job like this. And I don't care what the White House says; if our planes were there for a number of missions dropping precision guided munitions (that's fancy speak for Smart Bombs) you can be damned sure we had more Special Operations guys on the ground with laser target designators to illuminate the intended targets for the bombs to hit and to do intel gathering & bomb damage assessments. It's only "boots on the ground" if the media says something about it, I guess.

And now we have a hundred or so guys headed to yet another Third World Unstable Turdpile. Welcome to Uganda, boys. You're supposed to just advise and observe, but you'll be fully combat-capable, just like our advisors were in Vietnam and every other bush war in the past 60 years. Read all about it directly from Uganda's online newspaper. They could be sending you to several unfriendly countries in search of Evil Doers.

So, Mister Nobel Peace Prize....you have troops in Afghanistan, Iraq, Libya, Uganda, and are we still helping them find rebels in the Philippines or did you stop that since the rebels are fellow communists? How's that Gitmo closing going? Not that it should be closed, mind you, unless we stand them all up against a wall with a blindfold & a smoke first.

Perhaps you should instead be preparing for an upcoming war with IRAN...... 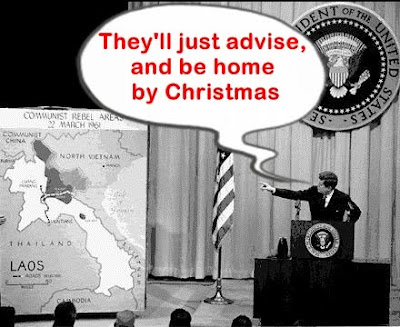 What, indeed, happened to all of those campaign promises about ENDING wars. Now he's got into at least two more?

Where's the outrage from the left?

great points, too bad the left will either intentionally miss them or, more likely, vilify you for pointing them out.