In Their Own Words: The Leech Class 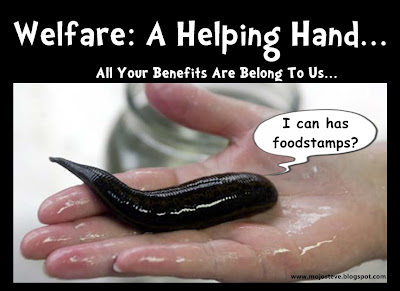 This morning, long about 3:15 AM Eastern or so, I was on a quiet dark country road on my way to work. I was listening to RedEye Radio, what used to be called the Midnight Trucking Radio Network, since I just can't listen to all the UFO and Tinfoil Hat stuff on Coast to Coast AM. Anyway, I digress...

The topic of conversation turned to their audio of a clip culled from this weekend's episode of HBO's "Real Time With Bill Maher". In general I have a low opinion of Maher, an unfunny liberal mouthpiece hack, and I was prepared to loathe his guest by name alone: Alexandra Pelosi, daughter of Nancy Pelosi. Yeah, guilt by association, and the rotted crabapple didn't fall far from the tree.

It seems in last week's episode, unwatched by me because A) I don't have HBO and B) I would sooner poke myself in the eye with a scalding french fry, Miz Pelosi in the role of roving correspondent, was in rural Mississippi for the state's Republican Primary and she interviewed only the most ass-backwards stereotypes she could fin in an attempt to belittle Southerners as a whole and Southern Republicans in particular. Well, this week, in some vague attempt to be fair & balanced, she went to the welfare office across from her apartment building in New York City and began interviewing the Leech Class vultures fleecing you and me for free stash.

Well, it just gets better...and you'll recall how just a week or so ago I was educating ya'll on the Leech Class and how they operate? Yeah, well, here it is in all its glory. I had to search a bit to find a good copy to embed.


Yeah...I thought my effing head was gonna explode. The video interviews were bad enough, but I finally had to turn it off when they started to compare defense spending to welfare.

Hey, Princess, and your a-hole sponsor too: America's warfighters, the pointy end of the spear, the ones who fight and bleed and sacrifice and die so that you two Liberal Pond Scum can live your wealthy 1% lifestyles, are NOTHING like the vermin infesting the Leech Class, who refuse to work and just expect everything to be handed to them.
Posted by Steve: The Lightning Man at 3/19/2012 07:38:00 PM