Democrats put the (D) in Despicable

I'm pretty sure I have seen just about everything now. The depths of just how spiteful, vindictive, petty, and outright detestably and contemptibly despicable the Democrat party is knows no limits.

The first act that came to my attention was the setting up of barricades to close the World War Two Memorial in DC. This is an open-air monument on a city sidewalk open to pedestrian traffic. Ordinarily the monument has a staff of four, but the allegedly broke Feral Gubmint ™ has managed to free up as many as fifteen Park Police to set up BARRICADES to keep visiting WW2 vets from visiting their own memorial. Bear in mind that these vets are in their NINETIES, many in wheelchairs and in failing health. Bear in mind that the nation loses about a THOUSAND of these elderly WW2 vets a DAY and that this very well could be the only time before they die that they get to visit the monument to their accomplishments 70 years ago. Bear in mind that most of these veterans get to the memorial via the Honor Flight groups that use PRIVATE donations from PRIVATE citizens to fly these vets of the Greatest Generation to DC at no cost to the vets.  Bear in mind that the monument was paid for with PRIVATE FUNDS...well, 92% of it was.

A direct mail fundraising effort brought in millions of dollars from individual Americans. Additional large donations were made by veterans' groups, including the American Legion, the Veterans of Foreign Wars, Veterans of the Battle of the Bulge and others. The majority of the corporate fundraising effort was led by two co-chairs: Senator Bob Dole, a decorated World War II veteran and 1996 Republican nominee for president; and Frederick W. Smith, the president and chief executive officer of FedEx Corporation and a former U.S. Marine Corps officer. The U.S. federal government provided about $16 million. A total of $197 million was raised. Private corporations and private citizens raised 92% of the money involved. So the government is so broke it has to shut down can spend resources of FOUR TIMES what keeps the monument open in order to close it down and block it from old men and kids on field trips. Not to be deterred, however, veterans MOVED those barricades and visited the monument anyways. 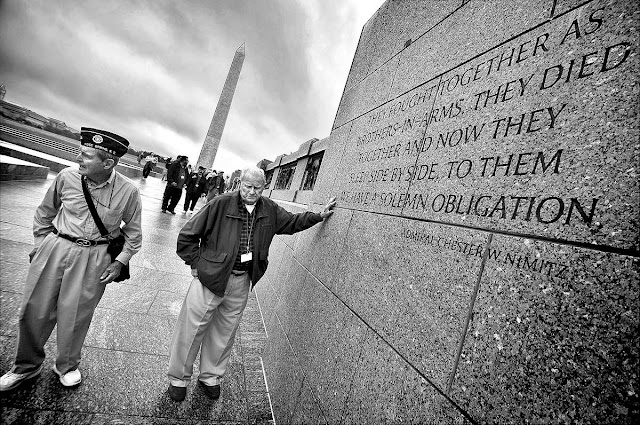 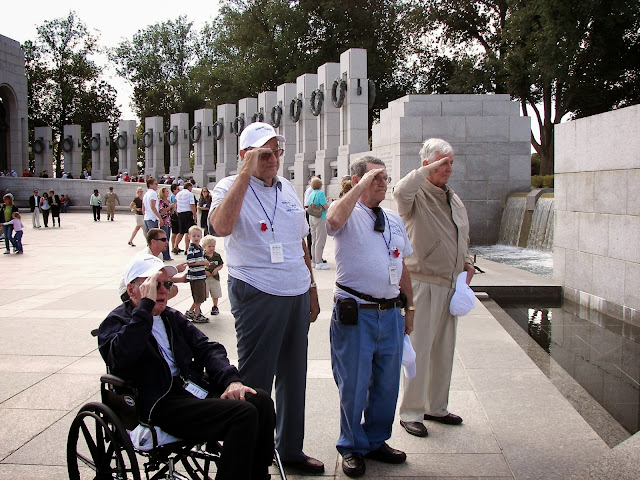 A group of Texas congressmen armed with bolt cutters made their way to the World War II Memorial in Washington after they learned the National Park Service had reinforced the barriers blocking the site with wire. According to Representative Louie Gohmert (R-TX) ,  “The president is trying to inflict the most amount of pain and suffering. This is not some bureaucratic mistake. This is Chicago thuggery. You try to make people hurt so they don’t resist what you tell them to do in the future.”

And when a group of Texas war veterans arrived Friday to see their memorial, several members of the Texas congressional delegation grabbed some bolt cutters and made their way to the National Mall.

“I was ready to go to jail,” said Representative Ralph Hall (R-TX). “If they got the handcuffs out, I’d have gone right with them.”. Hall is 90 years old and flew for the Navy during World War II. 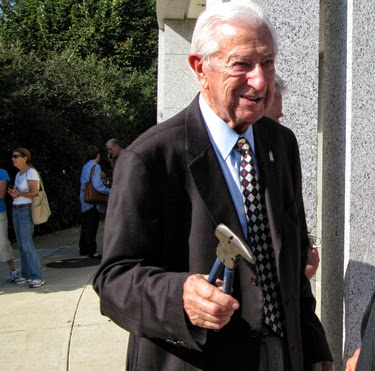 Likewise, attempts have been made to close the open-air Korean War and Vietnam War memorials and both have been met with scorn and the breaching of barricades by veterans who refuse to be deterred by government thuggery. The police even had the audacity to bring German shepherd dogs to try and frighten people at the Vietnam wall.


It gets even more insane.

Just before the weekend, the National Park Service informed charter boat captains in Florida that the Florida Bay was "closed" due to the shutdown. Until government funding is restored, the fishing boats are prohibited from taking anglers into 1,100 square-miles of open ocean. Fishing is also prohibited at Biscayne National Park during the shutdown. The Park Service will also have rangers on duty to police the ban of ACCESS TO THE OPEN OCEAN.  Florida Bay is the area of ocean off the Everglades over to the Keys, and Biscayne Bay is off Miami. The government will probably use more personnel and spend more resources to attempt to close the OCEAN than it would in its normal course of business.

The government is also forcing people out of their own homes. Seriously. People who live at Lake Mead, the reservoir formed by Hoover Dam just 24 miles from Las Vegas, were told to vacate their OWN HOMES because of governmental TYRANNY.

Joyce Spencer is 77-years-old and her husband Ralph is 80. He has limited mobility and uses a walker and a scooter to get around. They've been spending most of their time in the family ice cream store since going home isn't an option.They've owned their home at the lake since the 1970's but on Thursday a park ranger said they had 24 hours to get out.

Their Stewart's Point home sits on federal land, so even though the Spencers own their cabin outright, they're not allowed in until the government reopens. Park officials said property owners can visit only to retrieve belongings and issued a statement which reads in part, "Unfortunately overnight stays are not permitted until a budget is passed and the park can reopen."  Unbelievable.

Also forced out was 71-year old Bob Hitchcock, who has owned his vacation home on the lake for over 25 years. "I wouldn’t call it a government shutdown,” said Hitchcock, 71, a retired zone manager for 7-Eleven. “I’d call it a government meltdown. If my kids ever acted like these politicians are acting — it’s probably not politically correct to say this anymore — but I’d beat the crap out of them, then send them to their rooms.”

Christie Vanover, a spokeswoman for the Lake Mead Recreational Area said she while couldn’t put an exact number on how many residents were actually living in their vacation homes at the time of the government’s closure, she wanted to make one thing clear: “They are all vacation homes and everybody who lives in them are considered visitors,” she said. “If anybody needs to gather their personal belongings, we’re not going to deny them access. They can go do that. They just can’t spend the nights there or have barbecues during the day. They need to get in and get out.”. Wow...that's a helpful and positive attitude, you callous automaton. I hope you sleep well at YOUR home in YOUR bed while old folks are forced from theirs.

The jackbooted thugs of government have even squandered money and resources to spitefully put up blockade cones to keep motorists from seeing Mount Rushmore from a distance along the roadway. This is absurdity. It's petty and childish. And fed-up citizens have angrily removed the barricades.


Meanwhile, while the commissary grocery stores on military bases are closed and troops and retirees have to go buy their groceries on the economy at higher prices (hey, it's one of the few perks of service. Don't begrudge them a savings on their victuals), the GOLF COURSES on base are kept open so Lord Obama the Great can....of course...what else....GO GOLFING. Fiddle while Rome burns, Emperor...by the time the stink of the ash reaches your nose you'll be on fire... 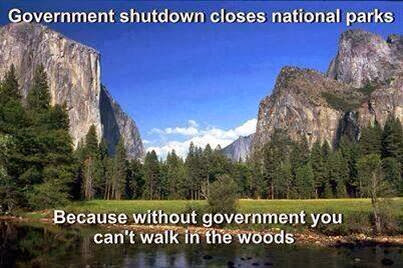 Since Obama says it's cool to drone-strike American citizens, I'll assume there are Predator drones now over the Grand Canyon, because you simply cannot be allowed to enjoy a 2,000 square mile hole in the ground without the Almighty Government. 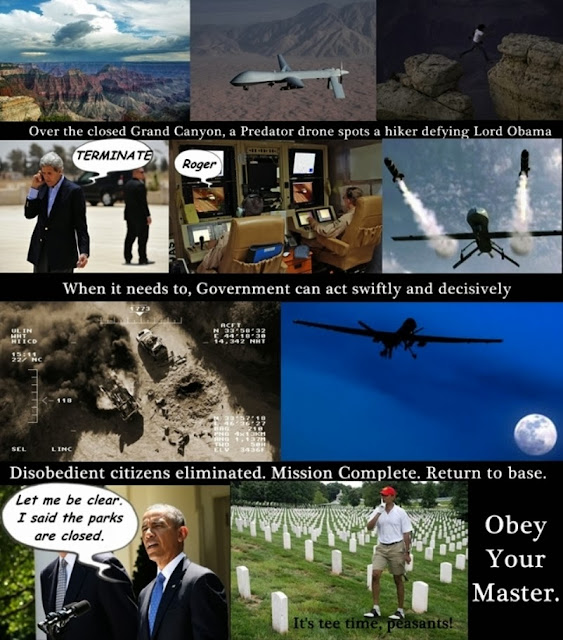 It's all Bush's fault, and you're a racist. Just remember that.

These progs are so beyond foul,I do not have words to describe my loathing of them!