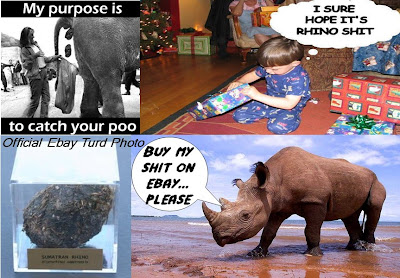 I have officially seen it all.

Wondering what to get this Christmas for that special someone who has everything? Try some endangered crap.

The International Rhino Foundation is auctioning on eBay four pieces of dung from the endangered species and will use the proceeds to fund conservation efforts. The pieces come from four of the five types of rhino: white, black, Indian (Greater One-Horned Rhino) and Sumatran; the Javan rhino is so rare that a sample could not be collected. Each turd is available separately.

Each piece is dried, mounted in a clear trophy case and marked with the type of rhino that produced it. The auction ends Sunday and as of Saturday afternoon bidding had been between 11 and 24 bids, depending on the turd in question. The current top bid as of 2:00 PM is for white rhino poop standing at $743.00. Sumatran dookie is next at $670.00, Indian rhino crap is right behind at $650.00, and the Black rhino spoor nugget was standing at $620.00. Shipping for each turd is $16.00.

Hurry, kids! Bidding ends tomorrow! There are only four turds for sale, and I hasten to mention there are only 17,500 rhinos left in the wild and only 1200 living in captivity.