Regressing To Childhood In One Easy Step 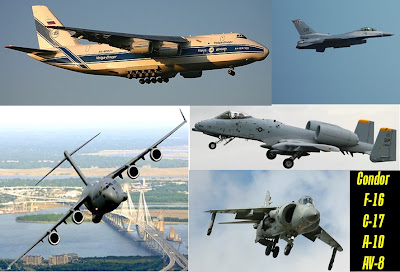 There are some things in life that a boy just never grows out of, even 20+ years after supposedly reaching adulthood. I still sometimes watch cartoons (when I can find one that’s not just some crap 30-minute commercial for a toy tie-in), and I still browse through Toys R Us in search of hockey figures and military miniatures. But the one thing from my childhood that I’ll probably never outgrow is my fascination for military aircraft.

There’s just something about watching a military jet flying over that turns me into a 10-year old again, no matter how many times I see one go over. My workplace is on one of the approach/take-off paths for Charleston Air Force Base, and about 20 times or so during a normal shift I’ll find myself watching the C-17’s come & go, a silly grin on my face. I’ve probably seen a couple thousand take-offs & landings at the base since I moved here, and I still never get sick of it. Tuesday afternoon I was watching one bank sharply, wings somewhere around a 45º angle like a little fighter instead of a cargo plane as it circled the base, and a couple minutes later it scooted swiftly by at treetop level headed back out again.

Of course, my muted gray and olive drab revelry isn’t limited to C-17’s. Thursday I rushed out my front door to watch an Army Blackhawk helicopter scooting along. Tuesday I interrupted a phone call to watch a pair of F-16 Falcons approaching in perfect formation barely 30 feet apart. Last Friday while sitting in traffic on Dorchester Road, a pair of AV-8B Harriers floated in over the roof of the car, with me sticking my head out the window to catch the full rumble of their Rolls Royce Pegasus engines. A couple weeks ago it was a pair of A-10 Thunderbolts (admittedly my favorite plane of all time) wheeling a tight circle over me as I was at a red light across from the Coliseum. Three weeks or so ago it was a massive Russian cargo jet, an Antonov-124 Condor, that caught my eye from a couple miles out and just kept getting bigger and bigger as it came to land, probably either to move some aircraft parts for Boeing or to transport some new MRAP vehicles to Iraq. (Bet you didn’t know we had a Russian cargo company transporting our military’s newest toy to the war zone, huh? But that’s a blog for another day.)

All it takes is for me to hear the rumble and high-pitched whine of a jet turbine for my heart to jump and my head to start swiveling around like my head’s on a gimbal-mount to find the source, and I’ll smile like a slack-jawed goofball, or at the very least like a six-year-old at the circus, and watch until it flies out of sight. Civilian planes don’t really do it for me unless they’re pretty big like a 747 or exotic like the Burt Rutan-designed Beech Starship I sometimes see around Charleston. Nope, for me it’s gotta be military. Maybe it’s my lifelong association with the military and my own Army service, or it’s just the idea of the sleek rugged and deadly purposefulness of the airframes. Maybe it’s just me trying to live vicariously, since I at one time had wanted to be a military aviator until my vision precluded me from being Joe Top Gun (though had I not be so danged hard-headed I could have opted to be an aircrew member or loadmaster).

I remember those halcyon days of yore when you could pack a picnic lunch and sit out off Aviation Avenue watching planes come & go out of Charleston. However in today’s post-9/11 climate that’s no longer allowed and the General Aviation zone has grown so huge with new hangars and always so full of cars that there’s no real place to sit over at their lot to watch anymore either. Nothing like a cold dose of reality to suppress your inner child.

That is not just a boy thing!!!! Me and the girls used to love the beach in Pensacola as it was under the training runs of most aircraft and the practice area for the Blue Angels! Nothing like that while you are playing in the water or enjoying the sun. But you are right civilian aircraft is not the same emotional stimulant as the military crafts.