How I'll Single-Handedly Save the Universe From the Writer's Strike 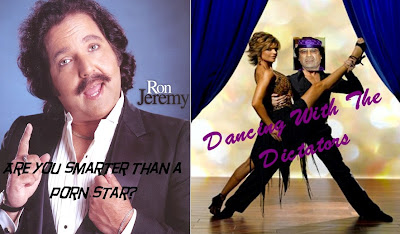 What with the writer’s strike going on in Hollyweird, the late-night talk shows are already into reruns, Jon Stewart & Stephen Colbert are silent, and in a couple of weeks the regular television series that were in production are going to run out of shows that were “in the can” and be forced to likewise play previously seen episodes. Pretty soon, all that’ll be left are reality shows, and I’m not sure I’m quite ready to embrace more inane crap like what’s already being aired.

Ergo, theretofore, I am taking it upon myself to personally rescue the American television viewing public from terminal boredom. I am your salvation, Sheeple. Harken to me, huddled masses, and I shall entertain thee. Feast thyne eyes upon my new offerings:

America’s Next Top Gardener—Tune in each week as contestants vie in the dog eat dog world of competitive gardening. See who cracks the week they try to grow orchids in low lighting conditions.

CSI: Smoaks--- Reconstruct the crime scenes on the mean streets of Smoaks, South Carolina, population 150. A special season-ending cliffhanger will leave you wondering just who left a bag of burning doggy doo on the steps of the General Store…..

Extreme Makeover Afghanistan Edition--- Ty Pennington and crew remodel a cave for a needy goat herder, only to have it blown up by a laser guided bomb when the locals turn out to be Talibans.

Are You Smarter Than a Pornstar?---Ron Jeremy and Jenna Jameson co-host this hilarious game show where average Joes are pitted against average Hoes to see who’s dumber.

Fear Factor: Crackhead Edition---There’s no telling what demeaning stunts a crack addict will do for a little rock! Hilarity ensues.

Phone Sex With The Stars---They can sing, they can dance, they can act…but can they make you pay $3.99 a minute? Tune in to find out!

Vatican Bloopers and Practical Jokes---It’s “Mass” hysteria when MTV pimps the Popemobile!!! Watch the shenanigans when the cardinals replace Pope Benedict’s zucchetto with a propeller-beanie!!! Rubber duckies in the holy water!!!!

COPS: Baghdad---Ride along with the fellows who patrol the mean streets of the most dangerous city in the world. Whether or not you speak Arabic, arresting a shirtless idiot with a mullet translates to any language.

Rehabs of the Rich & Famous---Tag along with Britney, Lindsay, and all the regulars as they go in and out of exclusive day-spa rehab centers, quit, and then go back again.

Earthworm Environment---From the makers of Meerkat Manor comes this touching family show about the trials and tribulations of an adorable colony of common earthworms in a Kentucky back yard. Feel the sadness when colony leader Billy Joe is picked up and put on a fish hook….and feel the excitement when top girly-worm Betty Boop escapes becoming the early worm for breakfast after a sparrow tries to eat her. After the bird’s beak snips her in half, both parts grow back into two new worms, Betty and Boop!

Email ThisBlogThis!Share to TwitterShare to FacebookShare to Pinterest
Labels: america's next top, are you smarter than, dancing with, extreme makeover, with the stars, writer's strike