Okay, Fall retreated for a day... 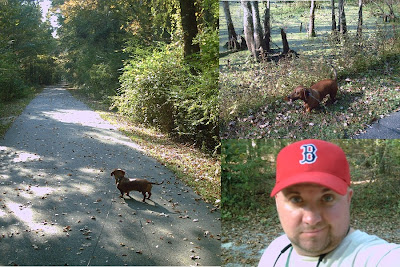 I think perhaps I misspoke the other day when I said Fall was here, because today was positively GORGEOUS.

Normally on a Wednesday, things are so insanely hectic at work that I’m totally wiped at the end of the shift and bail out as soon as the second-shift guys appear. I fight Highway Hypnosis along 17-A (after fighting Road Rage on Dorchester) and lapse into a vaguely comatose state after I get home. Not today…

It was simply too nice to not get outside today. It was 81º at 1:00 PM as I was headed home (I worked 4AM till 12:30) and it was just wonderful riding down a fairly deserted 17-A with the windows down and the sun in my face. After a quick a quick shower, on went the shorts and sneakers, and I grabbed a bottle of water for both me & the dog, and we headed out to walk the paths of the Great Swamp Sanctuary here in Walterboro.

The dog was ecstatic. He’d been so restless & bored the past few days, needing some outdoors time with Daddy. He’s really portable and loves to ride in the car, and it’s a riot to watch his little ears flapping in the wind when he stands up to stick his head out the window. Dachshunds rock!

Of course, like any male dog, he had to make sure he marked every blade of grass, tree, rock, bench, leaf, and twig along the trail. Those stubby little legs were working overtime as he scurried along the trail, making sure he explored everything …twice…and then a back leg would hike and he’d look up at me as if to say, “Hey, do you mind?”

We took a few pictures and shared a bottle of water (I love those collapsible travel bowls) before turning around and heading back. Of course, he was so wound up that I couldn’t get him to stand still long enough to get any really great shots. I honestly don’t know how Bill Wegman made a career out of photographing dogs. Of about 20 pictures, only two were usable.

According to Rob Fowler’s weather forecast on TV a minute ago, it’s due to start getting noticeably colder again tomorrow afternoon. That in part was my impetus for getting outside today. Both of us needed some extra exercise, and it very well could have been the last hurrah of Indian Summer. It would have been a shame to waste it semiconscious on the couch.
Posted by Steve: The Lightning Man at 11/14/2007 06:24:00 PM