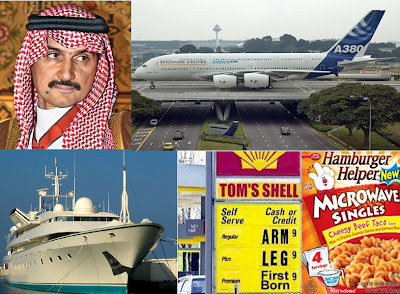 I guess when you’re not rich, it’s easier to thumb your nose at those who are. But even rich people would have to flip the bird to this kind of filthy lucre.

The world’s 13th richest person, Prince Alwaleed bin Talal of Saudi Arabia, is buying an Airbus A380 to use as his own flying palace. The 380 is not like a Learjet, I promise you. The Airbus A380 is the largest passenger airplane in the world. I’m not kidding.

The plane, a double-decker behemoth that can only land at certain airports because of its ginormity, can hold up to 850 passengers in its most basic economy configuration. However, bin Talal is the first person to purchase one for private use, and while Airbus will not say what the actual price tag is for the jet, they were willing to state only that it would cost more than the aircraft's list price of $320 million. Yeah…I’m worrying over adding a couple grand in options to the new car I’ll hopefully buy next year, and this guy is dropping perhaps 350 MILLION dollars…yeah, 350 with six more zeroes after it.

That doesn't even include the money the prince will spend to custom fit the nearly 6,000-square foot plane to include whatever he wants. The options include private bedrooms, a movie theater or even a gym with a Jacuzzi. He'll also need a flight crew of about 15 to operate this beast.

It's all just spending cash for bin Talal , who is Citigroup Inc.'s biggest individual shareholder, with personal assets around $20 billion. Yes…lots & lots of zeroes. As a member of the Saudi royal family, he benefits from the country's vast oil wealth, but much of bin Talal's huge fortune comes from his investment firm, the $25-billion Kingdom Holding Company. The company has stakes in Rupert Murdoch's News Corporation, Fairmont Raffles Hotels International, Time Warner, Apple, PepsiCo, and Walt Disney Company, to name a few major corporations. By the way, he also owns a 281-foot luxury yacht formerly owned first by Adnan Kashoggi and then Donald Trump. Perhaps you saw this little fishin’ boat in the James Bond film “Never Say Never Again”? And among his fleet of cars is a pair of Rolls Royce Phantoms.

The German company Lufthansa Technik, which specializes in maintenance, repair, and overhaul of commercial jetliners and is also the world leader in customizing VIP jets, has created a general rendering of what a VIP A380 jumbo could include: spacious bedrooms on the plane's upper deck, separated by a reception area and a bar next to central stairway. The master bedroom could include an office, private dinning room, a gym featuring a steam bath and exercise machines. The lower decks could feature a lounge-type quarters equipped with a conference area and dining room. A third level, normally used for cargo, could be transformed into another passenger space or cinema.

This type of custom design does not come cheap, obviously. Experts say it could rack the price up by another $50 million to $150 million. So let’s add another few zeroes, and this plane could very well top out at over half a billion clams. Again, chump change, and that chump change is why you and me are being bled dry at the gas pump. I’m eating microwaveable singles from Hamburger Helper on my lunch break at work because the gas for my daily commute is three bucks a gallon, and this assclown has a flying palace with three times the square footage of the average American home. And hey, America, gas is supposed to go up nearly 20 cents MORE a gallon next week just in time to screw all the holiday travelers.

Note To U.S. Gummint™: China will soon be drilling for oil off Cuba. Yes, Cuba. That little country in our back yard. So then why aren’t we drilling more off Florida and in the Gulf of Mexico? When will we open up the North Slope of ANWR to drilling? The answer is not, as Hillary Clinton suggested, to just tap into more of our Strategic Petroleum Reserve; the answer is NOT to use more of what we already have so that we’ll have less. The answer is to GO GET MORE. It’s out there and we won’t go get it because we’re worried about upsetting all the tree-huggers. China will be drilling off the Florida Keys, people. They’re going to suck dry the oil fields off of our shores before we can get to it, while we sit on our thumbs and continue to pay out the nose or foreign oil instead of GETTING OUR OWN. China’s re-opening an abandoned refinery that the Russians built in Cuba, making gas 90 miles from the US of A, and we’re just…gonna…let…them…do it.

In some places out here in LA, gas is is almost $4 a gallon for premium.

The fact that so much of our media is owned by foreign interests makes me wonder what kind of influence they have on what gets reported and written.