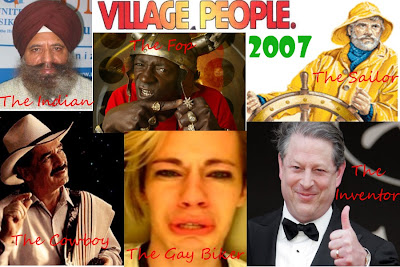 Over the past few years I’ve spent a lot of time in sports arenas around the region for hockey games (North Charleston Coliseum, Florence Civic Center, Carolina Coliseum, Cricket Arena) and have listened to games being broadcast from many others, and one of the constants that you can always count on is the music.

Pretty much every stadium broadcast booth is stocked with the ESPN Jock Jams cd collection, because you’ll always hear the same songs at every event. No matter the sport, you’ll be hearing “Get Ready For This” by 2 Unlimited, “Kernkraft 400” by Zombie Nation, and “Cotton Eye Joe” by the Rednex.

Of course, pretty much every team plays the exact same song when a goal is scored, and that’s “Rock & Roll, Part Two” by Gary Glitter. Amazing that we celebrate our team scoring by chanting along to a thirty-five year old song recorded by a convicted pedophile currently in a Vietnamese prison.

And then there’s “Y.M.C.A.” by The Village People. Great track, catchy as hell, and rapidly approaching its 30th birthday. No, this song is NOT about the Young Mens Christian Association and how cool it is to go learn to swim there or play in a rec-league hoops tourney. Underneath that fun chorus and doofy dance is a song that extols the virtues of cruising for gay sex at the Y. Yeah, bet all you Macho Man types didn’t know that didja? I can hear the homophobes backpedaling all the way from here.

The Village People were disco’s boy band, pre-packaged and gift-wrapped. Only one of them could actually sing lead, kinda like N’Sync, and they did throwaway pop music written and produced by studio people. (Although in their defense, I must note that the lead singer, Victor Willis, did write the songs on their three follow up albums, and the other guys did sing the backup harmonies)They were only popular for a short time, a flash in the pan really, but their legacy lingers. It was like a gay disco version of KISS, but instead of hard rock and Kabuki makeup it was theme costumes and dance beats. You had The Cop, The Construction Worker, The Gay Butch Biker, The Indian, The Cowboy, and The Soldier/Sailor, with occasional costume variations among them.

The Village People also had a huge hit with “Macho Man”, which was as thinly disguised a come-on song as you can get. Check these lyrics: “You can best believe that, he's a macho man ready to get down with, anyone he can…” Something tells me their hit “In the Navy” did nothing to help post-Vietnam War recruiting woes: “If you like adventure, don't you wait to enter the recruiting office fast. Don't you hesitate, there is no need to wait; they're signing up new seamen fast…” Yeah, I bet they are, big boy.

Other songs included “Fire Island”, “San Francisco”, “Hot Cop”, “I’m a Cruiser”, “I Am What I Am”, “Sodom & Gomorrah”, and “Action Man”, but perhaps the cleverest of all was “Go West”, a song that only achieved minimal success at best for the band, but was a #2 UK single when it was covered by the Pet Shop Boys in 1993. My ex-wife almost choked on her self-righteousness when I played the song, an anthem of gay liberation to be found out west in the Bay Area, and she said it was almost note for note a copy of a 1978 Christian song called “Give Thanks With a Grateful Heart”. I still laugh at that.

Maybe we need a new Village People? Boy Bands have crapped out, and pop music as a whole is pretty abysmal. We could do a Village People 2007, updated and ready to go.

•The Cop, well more like The Fop---Flavor Flav. Why not? A Viking helmet’s not too far a cry from a cop helmet…

•The Indian---- A New York City cab driver. Makes more sense, since all the Native Americans I see these days own casinos and wear Armani suits.

•The Cowboy----All the cowboys are gone. Bring in Juan Valdez!

•The Sailor----Trust the Gorton’s Fisherman. He’s got your back.

•The Token Gay Icon----Chris Crocker. Is there any doubt?

•The Inventor----Al Gore invented the Internet, and invented Global Warming too.

Perhaps they can redo an old classic and call it “In the Army” to bolster flagging recruiting numbers in today’s Iraq War climate?

That group always amazed me. Being gay in the 70's was not well respected. Maybe they could make a comeback.

You rememembered a lot more of their songs than I could have, I could have named YMCA,Macho Man and In The Army, but that's all.

I like the idea of Al Gore as one of the village people. Maybe Bill and Hillary too? Barack and Edwards too!

chris crocker is NOT a gay icon sweetie