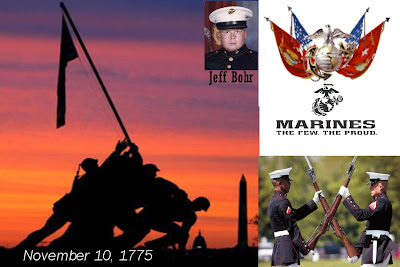 If you see a Marine, past or present, this weekend, wish them a happy birthday.Trust me, they’ll understand, and they’ll be highly appreciative.

Deep down, I sorta have a soft spot for Marines. I’ve always had the utmost respect for my comrades-in-arms from my sister service, and I’ve always been surrounded by Marine vets for as long as I can remember. This weekend we celebrate Veteran’s Day, but the day before that, the United States Marine Corps will celebrate its 232nd birthday.

Formed at Tun Tavern in Philadelphia by an act of the Continental Congress, and organized as the Continental Marines on 10 November 1775 as naval infantry, the Marine Corps has served in every American armed conflict from the Revolutionary War to Operation Iraqi Freedom.

If you’ve never had the privelege to see the Marine Corps Silent Drill Platoon perform, then you have missed out on one of the coolect things in the known universe. What the Thunderbirds and Blue Angels do in the sky, the Silent Drill Platoon does for close-order drill and ceremony, all without verbal commands.

Some Marines who impacted my life:
While in high school my neighbor Don Ares, a retired Gunnery Sergeant, often told me funny stories of his travels with the Corps. One of the most colorful and funny Marines I ever met was Staff Sergeant Pat Curley, a recruiter in Portsmouth, New Hampshire in the late 80’s. He recruited two of my best friends in high school, Chris Cunningham and Mike Dunham.

While on leave prior to going to Germany, I got to hang out with Chris and some of the guys in his platoon and had a blast. I still talk to one of his platoon-mates from time to time; Chris Hembree is a successful attorney in Washington, DC and visits down this way a few times a year.

And of course, there’s Chris Cunningham himself. Chris has been one of my two closest friends for 24 years. After high school, I went into the Army and Chris went into the Marines. It’s probably the longest period of time that we’ve lived more than 50 miles from each other. Over the years we’ve teased each other in a good-natured inter-service rivalry that usually sees me losing a 6-pack bet on the annual Army-Navy football game.

I also want to take a moment to recognize a fallen Marine on this Marine Corps Birthday. I never really knew Gunnery Sergeant Jeffrey Bohr, but Chris served with him and always held him in high regard, and by all accounts, Gunny Bohr was a Marine’s Marine. I met him briefly before I went to Germany, when he was a Corporal assigned to King’s Bay Submarine Base, but Chris would mention him now & again over the years. A native of Ossian, Iowa, Jeff was felled by a sniper on April 10, 2003. He was 39 years old .

With his company assigned to seize a presidential palace in Baghdad and concerned that logistical resupply might be slow in reaching his fellow Marines once they reached the objective, Bohr volunteered to move in with the company’s main armored convoy.

While moving through narrow streets toward the objective, the convoy came under intense small-arms and rocket-propelled grenade fire. Throughout this movement, Bohr delivered accurate, effective fires on the enemy while encouraging his Marines and supplying critical information to his company commander.

When the lead vehicles of the convoy came under enemy fire, Gunny Bohr continued to boldly engage the enemy while calmly maneuvering other Marines to safety. When word came down that there was a wounded Marine in a forward vehicle, Bohr immediately coordinated medical treatment and evacuation.

Moving to the position of the injured Marine, Bohr continued to lay down a high volume of suppressive fire, while simultaneously guiding the medical evacuation vehicle, until he was mortally wounded by enemy fire. One account stated that Jeff had the radio handset in one hand and was firing his M-16 with the other when he was hit.

Jeff’s wife Lori accepted the medal during a ceremony on May 3, 2003 at a ceremony at Camp Pendleton, California. Semper Fi and God Bless. The sacrifices of the Bohr family are not forgotten.

So today I want to take a minute and salute my comrades from my sister service. Yours is a long and proud tradition. However, the Army’s is longer, so there! Happy 232nd birthday, Devil Dogs!
Posted by Steve: The Lightning Man at 11/08/2007 05:06:00 PM

Thanks for the overview of the Marines. I didn't know so much about them other than they're a branch of the armed services.

My heart goes out to the young widow you mentioned. I soundly salute all marines in service everywhere (and other branches as well)