I guess it's really fall after all... 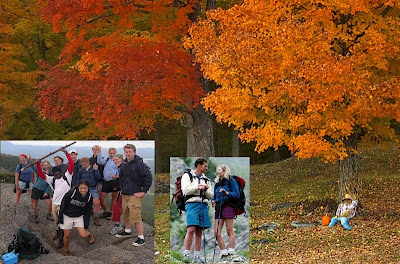 Okay, I’ll finally say that Fall is here. The temperature reading on my little Windows Sidebar gadget thingie says it’s 56 degrees here in Walterboro at 1:45 PM, and there’s a brisk wind blowing the debris around outside. I say debris rather than leaves because down here, the leaves are never quite sure when to all off the trees. I have a hot cup of coffee in hand and can reflect on Autumn as I relax on a week’s vacation.

As a Yankee transplant to the Lowcountry, the Autumnal season is a bit strange to me. My coworkers are showing up at the plant wearing fleece pullovers and skully hats, and I’m still in short sleeves. The weather that we’re having today is what I’m used to seeing in early September back in Maine. The year I moved back down here, in October 2000, I’d already had my first snowfall by the second week of the month. My first frost was in mi-September. Now here we are at the end of the first week of November and I finally had to break out a hoodie. I’m certainly in no way ready to break out my snowboarding parka.

I really had to laugh when the company I work for released the Pumpkin Spice Egg Nog the first week of October. C’mon….just because the calendar says fall is here doesn’t mean it really is. I know that egg nog is a very competitive market product and it has a very small sell-window, but let’s be realistic; no one wanted a big thick glass of nog on a 95 degree day.

There’s not much I miss about living up north. In fact, I really didn’t like it all that much up there at all. But watching the leaves turn brilliant shades of red and yellow and orange was a gorgeous sight. Down here, things just go from green to sickly jaundiced yellow to brown, and then the next 5 months is spent trickling off the branches in dribs and drabs.

Of course, up north, no one wants to brave a 20-degree day to stand outside frying a turkey. Up north, the shorts & t-shirts have been packed up, not to be seen again till May. (Although a lot of us die-hard stalwarts would break out the cargo shorts with a sweatshirt and hiking boots as soon as the temps broke 40, just to thumb our noses at winter)

Fall means hockey season starts up again, and the weather here means that it’s not a hardship to stand outside after a game to chat with the players, and it also means you aren’t dragging heavy coats & what not to games. Tailgating isn’t a body-numbing experience. If you’re a football fan, it means that you don’t need to bundle up like the Michelin Man to watch a game outdoors. And I assure you, falling down on FROZEN ground, especially when being tackled, sucks with a capital OUCH.

Back in Maine, if you die after Columbus Day, you probably aren’t getting buried till after Memorial Day. The ground freezes and becomes too hard to dig a grave in, so they keep you in the cooler till it’s warm enough to dig the hole to put you in and have a graveside service come spring.

So Fall has finally come to the Lowcountry. Good, maybe my grass will stop growing now and I can keep the weeds at bay till March.
Posted by Steve: The Lightning Man at 11/07/2007 03:59:00 PM

Email ThisBlogThis!Share to TwitterShare to FacebookShare to Pinterest
Labels: autumn