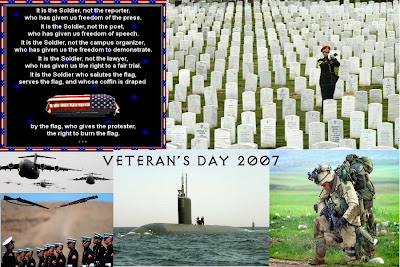 This Sunday marks the passing of Veteran’s Day. Sad to say, most people will go about their lives as normal without any real thought to what the holiday means. They’ll go shopping, since everybody’s running special sales. They’ll watch football, since that’s what Americans do on Sunday. Some of them will enjoy a day off from work or school on Monday, and give no further thought as to why.

Some of us, though, are well aware of the sacrifices endured by this nation’s military veterans and their families throughout our 231 years as the United States of America.

I myself come from a VERY long military tradition in my family. One line of my mom’s family goes back to the crusader knights under Richard III of England. Also on mom’s side, my great-great grandfather died in the Boer War in South Africa fighting against the Dutch Afrikaners who eventually instituted Apartheid. My great grandfather served in the 75th Highlanders of the Canadian Army. Both of my mom’s parents served in the Canadian military during World War Two. My grandmother’s brother spent a career in the Royal Canadian Air Force. Two of my mom’s brothers served in the US Army during Vietnam, neither of them American citizens at the time. My stepfather served 24 years in the US Navy’s submarine fleet, starting as an enlisted man & retiring as a Lieutenant Commander.

My father served briefly in the Army during Vietnam but was injured before deploying and was medically retired. Two of his brothers each served over 20 years in the Army and another brother is a Navy chaplain. My paternal grandfather was a nose-gunner on a B-24 Liberator bomber during World War Two.

My father-in-law is an Army veteran. Two of my cousins have done tours in Iraq. The brother of one of my closest friends is there on his third tour right now. Of my high school circle of friends, pretty much all of us entered the services. Of my current friends, many are veterans. And then there’s me, who for four years served likewise as a Military Policeman in the US Army.

So, yes, I take service to our nation quite seriously.

In college, they scheduled Columbus Day as a day off and had classes scheduled for Veteran's Day. I warned my instructors ahead of time that I'd not be there or Veteran's Day, and when one of them questioned me as to why, I just flatly stated: "It's MY holiday and I earned it."

A sad news story making the rounds this week proclaimed that veterans make up one in four homeless people in the United States, though they are only 11 percent of the general adult population. That’s insane. If you’re an employer reading this, hire a veteran. You’ll be getting a self-motivated employee who doesn’t need to be babysat and has built-in leadership skills and attention to detail. Give a little back to those who give so much. This weekend, take a second or two to reflect on all that you have because of the service of our vets. Have YOU hugged a veteran today?

I salute my fellow vets. You are all my sisters & brothers, my comrades, and the true heroes of this great nation. Thank you all for your service and your sacrifice.
Posted by Steve: The Lightning Man at 11/09/2007 08:29:00 PM

Hats off to your family. My heritage isn't as rich as yours, but my father, father-in-law, two brothers, a sister-in-law and brother-in-law all served. My step-son also served.

Happy veteran's day to all veterans.