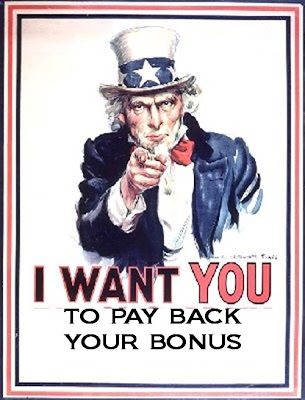 Back when I enlisted, I was able to get the GI Bill for college money just like all enlistees, but since I was going into the Military Police and not into something else that was under-manned, I wasn’t offered the Army College Fund. Nowadays recruits still get the GI Bill and certain college money benefits, but a lot of enlistments into certain specialties are coming with up to $40,000 in combined bonuses. Needless to say, the military branches are finding it easier to make their recruiting goals when offering scratch like that. When you’re young and think you’re indestructible, someone waving 40 grand plus free college in your face is like tossing a big hook loaded with fat worms to a trout. Then these kids get all trained up and sent to the Sandbox, and unfortunately, Bad Things can happen. It’s not just young kids, either. In some cases, older recruits with a heavy burden of financial considerations enlist to use the bonus money to help out their family’s situation and take advantage of the healthcare benefits.

When I was a soldier, I used to sleep easier knowing that if something happened to me in the function of my duties that the Gummint™ would take care of me. Not so these days, it seems.

The military has started demanding that thousands of wounded service personnel give back signing bonuses because they are unable to serve out their commitments. Now men and women who have lost arms, legs, eyesight, or hearing and can no longer serve are being ordered to pay some of that money back.

One of them is Jordan Fox, a former soldier from the Pittsburgh area, in whose name
Operation Pittsburgh Pride was started. The group sends care packages to troops serving in Iraq. Fox was seriously injured when a roadside bomb blew up his vehicle, injuring his back and taking all vision in his right eye. A few months later Fox was sent home; his injuries prohibited him from fulfilling three months of his commitment. A few days ago, he received a letter from the military demanding nearly $3,000 of his $10,000 signing bonus back.

This is not a new problem. As far back as October 2004, Brian Ross of ABC News reported an similar story. Army Specalist Tyson Johnson III, who lost a kidney in a mortar attack last year in Iraq, was still recovering at Walter Reed Army Medical Center when he received notice from the Pentagon's own collection agency that he owed more than $2,700 because he could not fulfill his full 36-month tour of duty. In addition to the lost kidney, shrapnel damaged Johnson's lung and heart, and entered the back of his head Field medical reports said he was not expected to live more than 72 hours. Johnson said the Pentagon listed the bonus on his credit report as an unpaid government loan, making it impossible for him to rent an apartment or obtain credit cards. At one point, Johnson was living in his car so as not to burden his family.

In a more recent example a couple months ago, NPR radio reported on Army Specialist Ronald Hinkle, who suffered a traumatic brain injury after an IED explosion cut short his military career. He now is unable to think clearly and tires easily. He suffers from seizures and cannot be left alone. Not only was Hinkle owed $2,500 in back salary, but two months after NPR's story aired, he was notified that a $3,000 enlistment bonus would not be paid because he "failed to fulfill his contract" — by way of suffering serious injury in the line of duty. Multiple bureaucratic screwups have gypped Hinkle’s family out of thousands of dollars in medical benefits, and the family is so strapped now that they may lose their family ranch.

What an absolute crock. How can you take the best & brightest of your nation’s young people, run them on a rotating basis through a crappy meat grinder, send them home less than whole, and then ask them to give back the bait you used to lure them into it in the first place? I could see if a kid signs up, collects a bonus, and then just up and quits or goes AWOL. But to lose a limb or a bodily sense, or suffer a traumatic brain injury, and then be BILLED? That’s just insane. How about you give those kids back their eyes, legs, arms, and hearing, and then ask for the money back.

Sure, the military has since recanted their bills to Johnson and Fox after coming under fire, claiming their billing letters were sent in error, but Hinkle’s case is still in limbo. Legislation has been introduced to protect wounded soldiers from having to pay back their bonuses, but it never should have had to come to this in the first place. You have to support your soldiers from start to finish, including after they get back. I just read somewhere that there are something like 20,000 brain injuries from the war not being listed as casualties, and these numbers don’t include all the cases of PTSD out there that sometimes take months to manifest after returning from the war zone.

Do you know of any congressman who have addressed this? Any way that we can help?