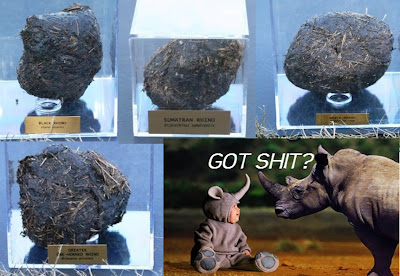 I just wanted to give everyone a last-minute update as to the current bids on the rhino turds on eBay. It's 1:00 PM on Sunday and the auctions end in about an hour and a half.

The projected winner in the Great Turd Battle will be the white rhino. Hooray for white rhinos and white rhino turd lovers worldwide. This is some great shit, I tell ya'. I may have to gold-dip my own scat & sell it.
Posted by Steve: The Lightning Man at 12/09/2007 12:56:00 PM