That hole goes to China? 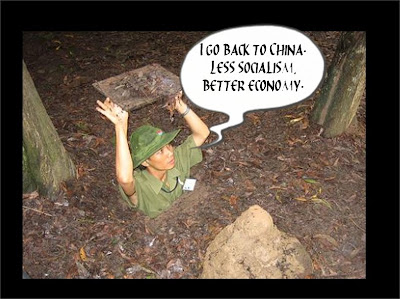 So there was an earthquake in China today...another in a string of worldwide quakes from Haiti to Chile to Indonesia to Kellyfawnya, all easily blamed by the Left on Bush's failed economic policies.

They say many of the 600 dead in China lived in wood and mud huts in this remote area of the Tibet Autonomous Region. Wait a second....to me autonomous means "independent", and since China forcibly took Tibet over, forced the Dalai Lama to flee the country and leave the White House by the delivery door into a trash-strewn alleyway, and brought the whole area under communist control, there really isn't anything autonomous about it at all. If communism is so great and makes people so prosperous, why are these semi-destitute souls living in buildings make of DIRT?

So, I come home from work this afternoon and there's this hole in my yard. I'm like, WTF? So I walk over & look down, and to my shock & surprise, a hand reaches up out of the hole. I grab the hand & pull, and up comes this scrawny, dirt-covered Asian dude. He bows, and I politely bow back. He looks around a little nervously at the hulking Caucasian man with the shaved head who is his rescuer and says in halting English "Please excuse me. My name Swee Poon Tang. I have earthquake today in Jiegu, China People's Republic. I fall in hole and come out other side, but where other side take me?"

Holy crap. All that rubbish they said when I was a kid about digging a hole to China was true?

To my dismay, Tang recoiled in horror.

I nodded to the affirmative.

I nodded, grimacing slightly at the mention of The Unholy Three.

Tang immediately jumped back in his hole. I called to him. "Dude! What are you doing?"

So did you go with him and this is posted from China?

Nahhhh... I gotta stay to fix this mess!