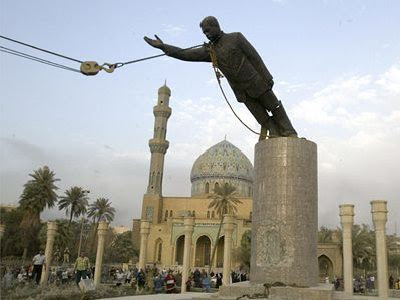 We can all easily & almost without hesitation come up with several examples of iconic photos from past armed conflicts that have captured the essence of the American warriors who defend our shores. From the Second World War, the pictures of the flag raising on Iwo Jima, the view of Omaha Beach through the open ramp of a landing craft on D-Day, or the shot of the sailor passionately kissing a girl in the street on VJ Day come to mind.

For the past ten full years now we have been in yet another war against those who would see the American way of life swept away. The way that I see it, there have been some more amazing & iconic photos that have been taken, but they haven't necessarily gotten the exposure they should have.

One of the first ones that got me was taken at the very beginning of ground combat in Iraq. A paratrooper from the 173d Airborne takes a knee to rest a minute, heavily laden with an enormous rucksack and an assortment of gear. He's tired, but his resolve is strong. 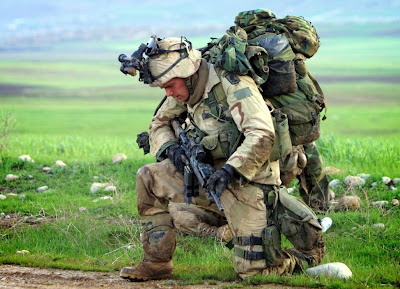 Also taken at the beginning of ground operations was the unforgettable shot of Army combat medic Joe Dwyer carrying an injured Iraqi boy to safety during the fighting. Years later, after fighting PTSD and substance abuse, his marriage crumbled and Doc Dwyer died at the age of 31 of an overdose at his home in North Carolina. He may have survived Iraq, but the war claimed him nonetheless. 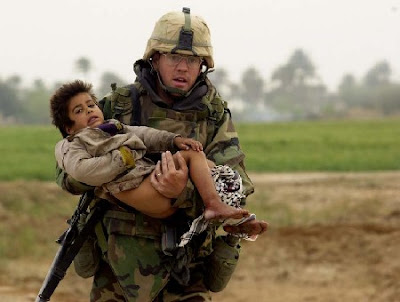 On May 11, 2009 at Firebase Restrepo in Afghanistan, Zachary Boyd was photographed responding to an attack on the outpost. He ran to his firing position wearing his helmet, his flak vest, flip flops, and "I ♥ NY" boxer shorts. His buddy next to him is wearing sneakers. Dressed or not, our troops are ready to bring the noise. 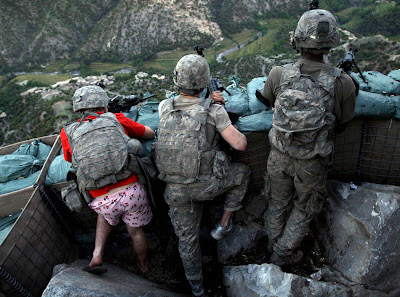 Recently, a picture went viral of a bald eagle, symbol of our great nation, perched upon a headstone at Fort Snelling National Cemetery in Minneapolis. 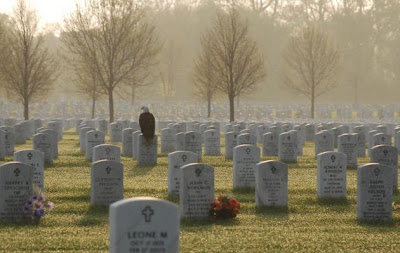 A couple days after I saw the picture of the eagle looking over our fallen warriors, another picture came about that simply astounded me. Hawkeye, a Labrador retriever that had belonged to Petty Officer Jon Tumilson, was photographed laying beside his master's coffin at his memorial service after the Navy SEAL was killed along with over 30 other warriors when their helicopter went down in Afghanistan. That's loyalty and love. 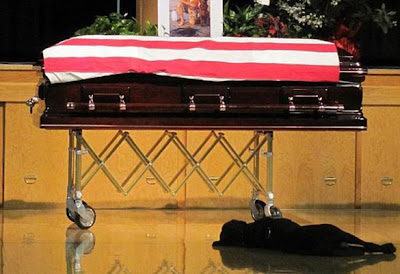 And just a couple weeks ago, while Hurricane Irene pounded the East Coast, a lone soldier standing guard at the Tomb of the Unknowns at Arlington National Cemetery was photographed in the rain maintaining his silent, solemn vigil over our fallen. 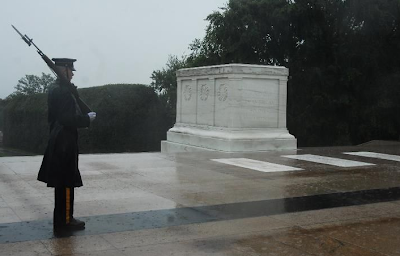 Great pics, my favorites are the eagle on the grave marker & the soldier at the Tomb of the Unknown. Thanks for sharing