Happy Birthday to the Military Police 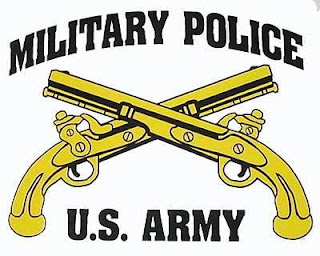 It was a busy week at work so I was remiss in not celebrating the 71st birthday of the United States Army Military Police Corps Regiment. This is my regiment, the one that I served in for my four years as a soldier in the US Army.

Military Police soldiers aren't just the law enforcement troops of the Army. When I was in, we pulled site physical security missions at sensitive nuclear & chemical weapons storage facilities abroad and here at home. We guarded the ammunition and supply trains to West Berlin. We were at the DMZ in Korea in the Joint Security Area. We worked with US Customs. We manned Checkpoint Charlie at the Berlin Wall. We did the usual law enforcement missions like regular cops, including anti-drug operations. And we worked closely with the Infantry & Armored Divisions in the combat support mission.

We perform myriad duties in the Combat Support role, from convoy security to route reconnaissance to Enemy Prisoner of War operations. In Panama, MP's engaged enemy forces to capture key locations, including a large secret weapons storage facility. When the first tanks of The Big Red One rolled into Iraq in Desert Storm, Humvees of the 1st MP Company rolled in with them to set up traffic control points to keep following units from getting lost in the desert. When Iraqi forces signed the surrender, one of my former platoon mates was spotted on CNN guarding the tent where General Stormin' Norman Schwartzkopf accepted the surrender. MPs were the first US troops on the ground in Somalia. Guys I served with were in Bosnia with the United Nations peacekeepers. Military Police soldiers have been heavily involved in combat operations in both Iraq and Afghanistan since the very beginnings of the Global War on Terror, as well as training local police forces to stand on their own.

Recently I also learned of another special honor regarding MP soldiers, that of Tomb Sentinel, guarding the Tomb of the Unknowns at Arlington National Cemetery. Traditionally this duty has been performed by Infantry soldiers assigned to the oldest continuously active unit in the Army, the 3d Infantry Regiment (The Old Guard), but when the 289th Military Police Company was attached to the regiment, something unique and special occurred. 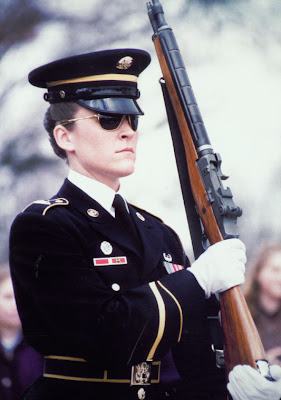 After months of memorizing and reciting the history of Arlington National Cemetery and the Army, of polishing shoes and perfecting her uniform, after hundreds of bone-jarring heel clicks and a grueling written test, Sergeant Heather Lynn Johnsen was awarded her Tomb Sentinel Badge and became the first, and so far only, female Tomb Sentinel at Arlington in 1996. 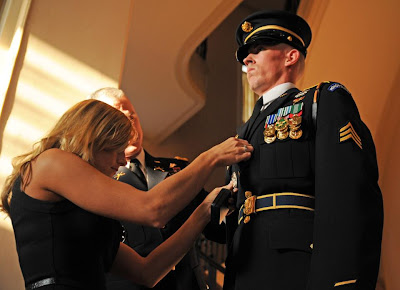 And most recently, Sergeant Erik McGuire became the first MP in 11 years to wear the Tomb Sentinel Badge when he was officially made a Tomb Sentinel on August 30, 2012.

I am exceedingly proud of my Army service and of my years as a Military Police soldier. Happy Birthday to all my fellow MP's, past & present. Of the troops and for the troops!
Posted by Steve: The Lightning Man at 9/30/2012 02:41:00 PM

Email ThisBlogThis!Share to TwitterShare to FacebookShare to Pinterest
Labels: military police, Tomb of the Unknowns, us army

I will strive to merit the respect of others, seeking no favor because of position but instead, satisfaction in a mission accomplished, and a job well done.